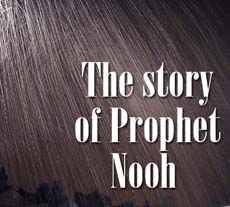 Prophet Nooh (Noah), may Allah exalt his mention, chose a place outside the city, far from the sea. He collected wood and tools and began working day and night to build the ark. The people's mockery continued: "O Nooh! Does carpentry appeal to you more than prophethood? Why are you building an ark so far from the sea? Are you going to drag it to the water or is the wind going to carry it for you?" Nooh, may Allah exalt his mention, replied: "You will come to know who will be put to shame and suffer."

Allah, the Almighty, Says (what means): "And He [Nooh] constructed the ship, and whenever an assembly of the people passed by him, they ridiculed him. He said: 'If you ridicule us, then we will ridicule you just as you ridicule. And you are going to know who will get a punishment that will disgrace him [on earth] and upon whom will descend an enduring punishment [in the Hereafter].'" [Quran: 11:38-39]

The terrible day arrived when the oven at Nooh's house, overflowed. Nooh, may Allah exalt his mention, hurried to open the ark and summon the believers. He also took with him a pair, male and female, of every type of animal, bird and insect. Seeing him taking these creatures to the ark, the people laughed loudly: "Nooh must have gone out of his head! What is he going to do with the animals?" Almighty Allah narrates in the Quran (what means): "[So it was], until when Our command came and the oven overflowed, We said: 'Load upon it [i.e., the Ark] of each [creature] two mates and your family, except those about whom the word [i.e., decree] has preceded, and [include] whoever has believed.' But none had believed with him, except a few." [Quran: 11:40]

Nooh's wife was not a believer, so she did not join him; neither did one of Nooh's sons, who was secretly a disbeliever but had feigned faith in front of Nooh, may Allah exalt his mention. Likewise most of the people were disbelievers and therefore did not go on board.

A Description of the Flood

Water rose from the cracks in the earth; there was not a crack from which water did not rise. Rain poured from the sky in quantities never seen before on earth. Water continued pouring from the sky and rising from the cracks; hour after hour the level rose. The high waves flooded the land. The interior of the earth moved in a strange way, and the ocean floors lifted suddenly, flooding the dry land. The earth, for the first time was submerged.

The Quran records this story in these verses (which mean): "And [Nooh] said: 'Embark therein; in the Name of Allah is its course and its anchorage. Indeed, my Lord is Forgiving and Merciful.' And it sailed with them through waves like mountains, and Nooh called to his son who was apart [from them]: 'O my son! Come aboard with us and be not with the disbelievers.' [But] he said: 'I will take refuge on a mountain to protect me from the water.' [Nooh] said: 'There is no protector today from the decree of Allah, except for whom He gives mercy.' And the waves came between them, and he was among the drowned." [Quran: 11:41-43]

Allah Almighty Says in the Quran (what means): "And it was said: 'O Earth! Swallow up your water, and O sky! Withhold your rain.' And the water subsided, and the matter was accomplished, and it [i.e., the ship] came to rest on the [mountain of] Joodiyy. And it was said: 'Away with the wrongdoing people'. And Nooh called to his Lord and said: 'My Lord! Indeed my son is of my family; and indeed, Your promise is true; and You are the most just of judges!' He [Allah] said: 'O Nooh! Indeed he is not of your family; indeed, he is [one whose] work was other than righteous, so ask Me not for that about which you have no knowledge. Indeed, I advise you, lest you be among the ignorant.' [Nooh] said: 'My Lord! I seek refuge in You from asking that of which I have no knowledge. And unless You forgive me and have Mercy upon me, I will be among the losers.' It was said: 'O Nooh! Disembark in security from Us and blessings upon you and upon nations [descending] from those with you. But other nations [of them] We will grant enjoyment; then there will touch them from Us a painful punishment.'" [Quran: 11:44-48]

With the issue of the divine command, calm returned to the earth, the water retreated, and the dry land shone once again in the rays of the sun. The flood had cleansed the earth of the disbelievers and polytheists.

Nooh, may Allah exalt his mention, released the birds and the beasts which scattered over the earth. After that, the believers disembarked. Nooh, may Allah exalt his mention, put his forehead to the ground in prostration. The survivors kindled a fire and sat around it. Lighting a fire had been prohibited on board so as not to ignite the ship's wood and burn it up. None of them had eaten hot food during the entire period of the flood. Following the disembarkation, there was a day of fasting in thanks to Allah.

The Quran draws the curtain on the story of Nooh, may Allah exalt his mention. We do not know how his affairs with his people continued. All we know or can ascertain is that on his deathbed he requested his son to worship Allah alone, and then passed away.

said: "When the death of the Messenger of Allah Nooh approached, he admonished his sons: 'Indeed I give you far-reaching advice, commanding you to do two things, and warning you against two others: I beseech you to believe that there is no deity except Allah, and that if the seven heavens and the seven earths were put on one side of a scale and the words 'There is no deity but Allah' were put on the other, the latter would outweigh the former. I warn you against associating partners with Allah in worship and against pride.'" [Al-Bukhari]