Virtues of reading the Quran 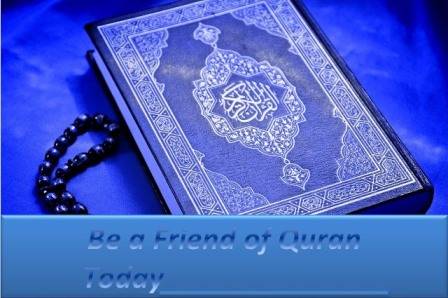 To reflect upon the verses of Allah is a form of worship; it is something that will draw one close to Allah, Most High. This reflection is not a reckless and wandering one, rather, it includes a study of the classical Tafseer (exegesis) of the verses being pondered over. Allah, Most High, Says in the Quran (what means): “Then do they not reflect upon the Quran? If it had been from [any] other than Allah, they would have found within it much contradiction.” [Quran: 4:82]

The Book of Allah is unlike any other; it is the timeless Speech of Allah, and not a created thing. It is the study guide for life, death, and what follows. Therefore, it deserves a far more careful study than anyone else’s speech. It necessitates that its reader return to the early narrations of those who witnessed its revelation and heard its explanation by the one deputed by Allah to rehearse and explain His Words to humanity, Muhammad

. For if one would try to ponder over the meanings of the verses without having done this study, then surely the filth of the time that he lives in and his ignorance of the correct application and understanding that the early Muslims had would cause him to understand some things not intended by Allah, Most High, and therefore he would go astray, thinking to be worshipping Allah. So, let every sincere Muslim who hopes to earn Allah’s Love by reciting and reflecting over Allah’s Book hold tight to the meanings explained by the Prophet

and those taught by the Companions and their immediate followers, and the early scholars of Islam.

Dear Muslim brother and sister! Know that reciting and pondering over the Book of Allah and devoting regular time to its study and implementation has tremendous benefits in this life and the next. Let us now look at just a few of them to attach ourselves more firmly to the majestic Words of Allah. Each benefit stands as enough of an encouragement to shun any laziness we have and dedicate ourselves wholly to the Quran.

Reading and Reflecting Over the Quran Fulfils an Islamic Duty

summarised this religion with his statement: “The religion (of Islam) is naseehah (offering sincere advice)!” Tameem bin Aws

replied: “To Allah, His Book, His Messenger, the leaders of the people, and to their subjects.” [Muslim] The sincerity that is due to the Book of Allah includes its regular recitation, learning the rules of Tajweed (the recitation of the Quran, according to specified rules) and reciting it beautifully, learning about its Tafseer and the reasons for its revelation, affirming that it is the truth, the perfect Speech of Allah and not part of the creation, honouring it and defending it, abiding by the orders and prohibitions found in it, and teaching it and calling to it.

This is due to the statement of the Messenger

: “And the Quran is a proof for you or against you.” [Muslim] So, one of two things will occur with this proof, the Book of Allah. It will either be in one's favour, a proof for us on the Day when we will desperately need every single good deed, or it will be something standing against us. The very Speech of our Creator as a proof against us! Who could be saved from the terrors of that Day if Allah’s own Speech is against Him?

Think carefully, dear Muslim brothers and sisters, about your position with the Quran. Are you neglecting it, contradicting it, and being heedless of its orders and prohibitions? Are you thinking deeply over it? Will it be on your side on the Day of Judgement?

The Quran will Intercede for Us on the Day of Judgement

said: “Read the Quran, for indeed it will come on the Day of Standing (Judgement) as an intercessor for its companions.” [Muslim]

The Quran Raises One's Status in this Life

In Saheeh Muslim, which is one of the two most authentic books of prophetic narrations, we find a wonderful story about how a man from the people of Paradise, ‘Umar bin Al-Khattab

understood this principle. The story is that once, some men came to question him during his reign as caliph regarding the leadership of Makkah. The men asked: “Who do you use to govern Makkah?” He

replied: “A freed slave from those we freed.” They remarked: “You left a freed slave in command of the People of the Valley (the noble tribes of the Quraysh)?” He

replied: “Indeed he is a reciter of the Book of Allah and is knowledgeable about the obligations of the Muslims. Haven’t you heard the statement of your Messenger

: “Verily Allah raises some people by this Book and lowers others by it””?

The People of the Quran are from Best of People

said: “The best of you are those who learn the Quran and teach it to others.” [Al-Bukhari]

There are Ten Rewards for Every Letter Recited from the Quran

As a Hadeeth (prophetic statement) in At-Tirmithi proves: “Whoever reads a letter from the Book of Allah, he will have a reward, and this reward will be multiplied by ten. I am not saying that 'Alif, Lam, Meem' (a combination of letters frequently mentioned in the Holy Quran) is a letter, rather I am saying that ‘Alif’ is a letter, ‘Lam’ is a letter and ‘Meem’ is a letter.” [At-Tirmithi] So increase your recitation of the Quran to gain these merits, as well as the following ones.

said: “Indeed the one who recites the Quran beautifully, smoothly, and precisely, will be in the company of the noble and obedient angels. As for the one who recites with difficulty, stammering or stumbling through its verses, then he will have twice that reward.” [Al-Bukhari and Muslim]

So dear brother or sister Muslim, do not let the Shaytan (Satan) give you false excuses, such as ‘I am not an Arab.’ or ‘It is not in my language.’ This Hadeeth is a firm proof against these whisperings.

Dedicate yourself to the Book of Allah, whether you are an Arab or not! The excuses have been eliminated and the pathway has been cleared for you to embrace the Book of Allah without holding back or offering excuses! Surely you will not hesitate to seek a teacher or a study circle for the Quran once you hear the last and perhaps greatest benefits of reading and contemplating over the Quran.

saying: “It will be said to the companion of the Quran: 'Read and elevate (through the levels of Paradise) and beautify your voice as you did when you were in the worldly life! For verily, your position in Paradise will be at the last verse you recite!’” [Abu Dawood and At-Tirmithi]

The Quran Leads to Paradise

The Quran states (what means): "Indeed the Quran guides to that which is most suitable and gives good tidings to the believers who do righteous deeds that they will have a great reward." [Quran: 17:9]

said: “The Quran is an intercessor - something given permission to intercede, and it is rightfully believed in. Whoever puts it in front of him, it will lead him to Paradise; whoever puts it behind him, it will steer him to the Hellfire.” [At-Tabarani]

Know, dear brothers and sisters, that these nine benefits from the numerous benefits available can only be attained by a sincere commitment to the Book of Allah, and not simply by an empty claim of love for it. Rather, the heart must be sincerely attached to the Book of Allah and the limbs and tongue will follow suit in this attachment. One must know that we only mentioned a few of the numerous benefits of reading and reflecting over the Quran. There are many other benefits that await your reading of the Quran and books of Hadeeth, such as the chapter of the Quran that will plead on your behalf in the grave, and that it is a physical healing, a source of rest and relaxation for your heart, among many other things.