Etiquette and behavior towards Allah 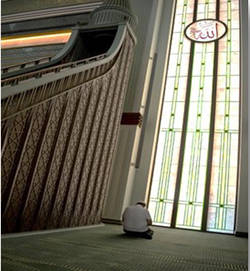 A Muslim thinks about the countless blessings that Allah has bestowed upon him. He considers the numerous bounties that Allah has given him -- from the time when he was a “drop of fluid” in his mother’s womb. These bounties continue until he meets His Lord. Therefore, a Muslim must thank Allah for these countless bounties with his tongue, by praising Him in a proper manner. He must also thank Him with his limbs by using them in obedience to Him. This is how he should behave towards Allah. Obviously, it is never considered proper etiquette to be ungrateful for the bounties one has received, or to reject the bounties of the One Who gives them. One also should never deny the goodness and bounties he has received. Allah Says in the Quran (what means):

• {And whatever of blessings or good things you have, it is from Allah.} [Quran 16:53]
• {And He gave you of all that you asked for, and if you count the Blessings of Allah, never will you be able to count them.} [Quran 14:34]
• {Therefore remember Me (by praying and glorifying), I will remember you. Be grateful to Me and never be ungrateful to Me} [Quran 2: 152]

A Muslim thinks about Allah’s Knowledge and the fact that He is watching everything, under every circumstance. The Muslim’s heart, then becomes filled with awe, respect and love for Allah. He becomes shy and embarrassed to disobey Him. This is how he should behave towards Allah. Obviously, it is not proper for a slave to go against his master by disobeying him or by treating him with disrespect, while his master is witnessing and watching him.

A Muslim also ponders over Allah’s Power and Control over him, and submits to this control. He knows that there is no escape or fleeing from Him. Allah is the only source of refuge and shelter. Therefore, the Muslim flees to Allah and throws himself before Him. He leaves his affairs with Allah and puts his trust in Him. This is how he should behave with respect to his Lord and Creator.

Allah Says (what means): {There is not a moving (living) creature but He has grasp of its forelock.} [Quran 11:56]

Allah also Says (what means): {So flee to Allah. (from His Torment to His Mercy – Islamic Monotheism). Verily, I (Muhammad) am a plain warner to you from Him.} [Quran 51:50]

Allah Says (what means): {Put your trust in Allah if you are believers indeed.} [Quran 5:23]

A Muslim also considers how Generous and Compassionate Allah has been to him in all of his affairs. He considers Allah’s Mercy upon him and upon all of His creation. He desires to have more of that mercy. He then humbles himself to Allah with sincere humility and supplications. He seeks a means of approach to Allah with the best of speech and good deeds. This is how he should behave towards his Lord, Allah. It is not proper to lose hope of receiving more of His Mercy, which encompasses everything, nor should one be pessimistic about receiving more of Allah’s Generosity.

Allah Says again (what means): {Certainly, no one despairs of Allah’s Mercy, except the people who disbelieve.} [Quran 12:87]

A Muslim always considers Allah’s power to punish severely and His swift reckoning. He does his best to obey Allah and tries to live without disobeying Him. This is all part of proper behavior towards Allah. People of intelligence know that it is not proper for a weak and incapable slave to commit acts of disobedience towards the Lord Who is the Powerful, the All-Capable, the Strong, the Dominant. Allah Says (what means):

A Muslim should also think about Allah while he is disobeying Him, as if Allah’s threat is already being applied to him, that His punishment has come upon him due to his action. He should also think about Allah while obeying Him and following His Laws, as if His Promise has already come true for him, that Allah’s Pleasure is being bestowed upon him. Having good expectations or thoughts about Allah is part of the etiquette due to Allah. It is not correct for a person to have bad thoughts about Allah and disobey Him, and think that Allah is not watching what he is doing or will not call him to account. Allah Says (what means):

• {But you thought that Allah knew not much of what you were doing. And that thought of yours which you thought about your Lord, has brought you to destruction; and you have become (this Day) of those utterly lost!…}[Quran 41: 22-23]

• {And whosoever obeys Allah and His Messenger, fears Allah, and keeps his duty (to Him), such are the successful.} [Quran 24: 52]

In conclusion, a Muslim must be thankful to his Lord for the bounties He has given him; he must be shy towards his Lord whenever he is inclined towards committing a sin; he must sincerely turn to his Lord, put his trust in Him, hope for His Mercy and fear His punishment. He must have good expectations concerning Allah fulfilling His Promises and carrying out His threat to any of His slaves if He wills. This is how he should behave toward Allah. The more that he sticks to these matters and guards them, the greater his position will be and the higher his rank will be with his Lord. He shall be greatly blessed by Allah; he shall become one of the devoted slaves of Allah, and of those people whom Allah protects. He shall be enveloped by Allah’s Mercy and shall have Allah’s Blessings bestowed upon him.

This is the utmost that any Muslim could hope to achieve and what he should strive for throughout his life.