Scientific finds versus speculations of evolutionists 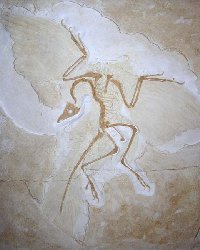 The teeth and claws of Archaeopteryx are no indication that they are descendants of dinosaurs.

The two important points evolutionists rely on when alleging Archaeopteryx to be a transitional form, are the claws on the bird’s wings and its teeth.

It is true that Archaeopteryx had claws on its wings and teeth in its mouth, but these traits do not imply that this living creature bears any kind of relationship with reptiles. Besides, two bird species living today, Taouraco and Hoatzin both have claws to hold on to branches. These creatures are fully birds with no reptilian characteristics. That is why it is completely groundless to assert that Archaeopteryx is a transitional form just because of the claws on its wings.

Neither do the teeth in Archaeopteryx’s beak imply that it is a transitional form. Evolutionists make a purposeful trickery by saying that these teeth are characteristic of reptiles. However, teeth are not a typical characteristic of reptiles only. Today, some reptiles have teeth while others do not. Moreover, Archaeopteryx is not the only bird species that has teeth. It is true that birds with teeth do not exist today, but when we look at fossil records, we see that both in the same age as Archaeopteryx and afterwards, and even until fairly recently, a distinct bird genus existed that could be categorized as “birds with teeth”.

The most important point is that the teeth structure of Archaeopteryx and other birds with teeth are totally different from that of their alleged ancestors, the dinosaurs. The famous ornithologists Martin, Steward and Whetstone observed that Archaeopteryx and other birds with teeth have teeth with flat top surfaces and large roots. Yet, the teeth of theropod dinosaurs, the alleged ancestors of these birds, are protuberant like a saw and have narrow roots.

The researchers also compared the wrist bones of Archaeopteryx and their alleged ancestors, the dinosaurs and observed no similarity between them.

The studies of anatomists like Tarsitano, Hecht and A.D. Walker revealed that some “similarities” asserted to have existed between this creature and dinosaurs as put forward by John Ostrom, a prominent authority who claims that Archaeopteryx evolved from dinosaurs, were in reality misinterpretations.

All these findings indicate that Archaeopteryx was not a transitional link but only a bird that fell into a category that can be called “birds with teeth.”

Archaeopteryx and other ancient bird fossils

While evolutionists have for decades been proclaiming Archaeopteryx to be the greatest evidence for their scenario concerning the evolution of birds, some recently-found fossils invalidate this claim in other respects.

Lianhai Hou and Zhonghe Zhou, two paleontologists at the Chinese Institute of Vertebrate Paleontology, discovered a new bird fossil in 1995 that they named Confuciusornis. This bird was almost the same age as Archaeopteryx (around 140 million years old), but it did not have any teeth in its mouth. In addition, its beak and feathers shared the same features as today’s birds. Having the same skeletal structure of modern birds, this bird also had claws on its wings just like Archaeopteryx. The special structure called the “pygostyle” was present in this bird species that supported the tail feathers. In short, this bird which was the same age as Archaeopteryx (considered to be the oldest ancestor of all birds and accepted as a semi-reptile) looked very much like a modern bird. This fact invalidated all the evolutionist theses holding Archaeopteryx to be the primitive ancestor of all birds.

Another fossil unearthed in China in November 1996, caused even greater confusion. The existence of this 130 million year old bird named Liaoningornis was announced in Science by Hou, Martin and Alan Feduccia. Liaoningornis had a chest bone on which the muscles for flight were attached, just like modern birds. This bird was indistinguishable from modern birds in other respects also. The only difference was the teeth in its mouth. This showed that birds with teeth did not have a primitive structure at all, as alleged by evolutionists. This was stated in an article in Discover: “Whence came birds? This fossil says that not from dinosaurs.”

Another fossil to refute the evolutionist claims regarding Archaeopteryx was Eoalulavis. The wing structure of Eoalulavis, which was said to be 30 million years younger than Archaeopteryx, was also observed in modern birds that flew slowly. This proved that 120 million years ago there were birds indistinguishable from modern birds in many respects flying in the skies.

These facts once more indicate for certain that neither Archaeopteryx nor other ancient birds similar to it were transitional forms. The fossils do not indicate that different bird species evolved from each other. On the contrary, fossil records prove that today’s modern birds and some archaic birds like Archaeopteryx actually lived together at the same time. Yet some of these bird species like Archaeopteryx and Confuciusornis have become extinct and only a part of the pre-existing species have been able to make it to the present day.

The claim of evolutionists trying to present Archaeopteryx as a transitional form is that birds have evolved from dinosaurs. However, one of the most famous ornithologists in the world, Alan Feduccia from the University of North Carolina, opposes the theory that birds have a kinship with dinosaurs, despite the fact that he is an evolutionist himself. Feduccia says on the subject:

"Well, I’ve studied bird skulls for 25 years and I don’t see any similarities whatsoever. I just don’t see it… The theropod origins of birds, in my opinion, will be the greatest embarrassment of paleontology of the 20th century."

Larry Martin, a specialist on ancient birds from the University of Kansas, opposes the theory that birds come from the same lineage as dinosaurs. While discussing the contradiction evolution falls into on the subject, Martin states:

"To tell you the truth, if I had to support the dinosaur origin of birds with those characters, I’d be embarrassed every time I had to get up and talk about it."

To sum up, the scenario of the “evolution of birds from dinosaurs” erected solely on the basis of Archaeopteryx, is nothing more than a product of the prejudices and wishful thinking of evolutionists.