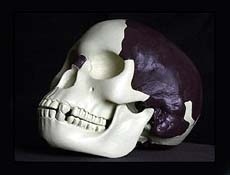 There is no concrete fossil evidence to support the “ape-man” image, which is unceasingly indoctrinated by the media and evolutionist academic circles. With brushes in their hands, evolutionists produce imaginary creatures, yet the fact that these drawings have no matching fossils constitutes a serious problem for them. One of the interesting methods they employ to overcome this problem is to “produce” the fossils they cannot find. 'The Piltdown Man' -- the biggest scandal in the history of science, is a typical example of this method.

Piltdown Man: An orang-utan's jaw and a human skull!

A well-known doctor and amateur paleoanthropologist, Charles Dawson, came out with an assertion that he had found a jawbone and a cranial fragment in a pit in in 1912 CE. ُُEven though the jawbone was more ape-like, the teeth and the skull were like a man’s.  These specimens were labeled the “Piltdown Man.” Alleged to be 500,000 years old, they were displayed as an absolute proof of human evolution in several museums. For more than 40 years, many scientific articles were written on the “Piltdown Man,” many interpretations and drawings were made and the fossil was presented as an important evidence of human evolution. No less than 500 doctoral theses were written on the subject.

The famous American paleo-anthropologist Henry Fairfield Osborn said: “…we have to be reminded over and over again that Nature is full of paradoxes and this is an astonishing finding about early man…”  while he was visiting the British Museum in 1935 CE.

In 1949 CE, Kenneth Oakley from the ’s paleontology department attempted to try the method of “fluorine testing,” a new test used for determining the date of some old fossils. A trial was made on the fossil of the Piltdown Man. The result was astounding. During the test, it was realised that the jawbone of the Piltdown Man did not contain any fluorine. This indicated that it had remained buried no more than a few years. The skull, which contained only a small amount of fluorine, showed that it was only a few thousand years old.

The latest chronological studies made with the fluorine method have revealed that the skull is only a few thousand years old. It was determined that the teeth in the jawbone belonging to an orang-utan had been worn down artificially and that the “primitive” tools discovered with the fossils were simple imitations that had been sharpened with steel implements. In the detailed analysis completed by Weiner, this forgery was revealed to the public in 1953 CE. The skull belonged to a 500-year-old man and the mandibular bone belonged to a recently dead ape!

The teeth were thereafter specially arranged in an array and added to the jaw and the joints were filed in order to resemble that of a man. Then all these pieces were stained with potassium dichromate to give them a dated appearance. These stains began to disappear when dipped in acid. Le Gros Clark, who was in the team that disclosed the forgery could not hide his astonishment at this situation and said that “the evidences of artificial abrasion immediately sprang to the eye. Indeed so obvious did they seem it may well be asked – how was it that they had escaped notice before?” In the wake of all this, “Piltdown Man” was hurriedly removed from the where it had been displayed for more than 40 years.

Man: The phantom who was born from a pig’s tooth!

In 1922 CE, Henry Fairfield Osborn, manager of the of Natural History, declared that he had found a fossil molar tooth in near Snake Brook belonging to the Pliocene period. This tooth allegedly bore the common characteristics of both man and ape. Deep scientific arguments began, in which some interpreted this tooth to be of Pithecanthropus erectus while others claimed it was closer to human beings. This fossil which aroused extensive debate was called the “Nebraska Man.” It was also immediately given a “scientific name”: Hesperopithecus haroldcooki.

Many authorities gave Osborn their support. Based on this single tooth, reconstructions of the Nebraska Man’s head and body were drawn. Moreover, the Nebraska Man was even pictured along with his wife and children, as a whole family in a natural setting.

All of these scenarios were developed from just one tooth. Evolutionist circles accredited this “ghost man” to such an extent that when a researcher named William Bryan opposed these biased decisions relying on a single tooth, he was harshly criticized.

In 1927 CE, other parts of the skeleton were also found. According to these newly-discovered pieces, the tooth belonged neither to a man nor to an ape. It was realized that it belonged to an extinct species of wild American pig called Prosthennops. William Gregory entitled his article published in Science magazine where he announced this fault as: “Hesperopithecus: Apparently not an ape nor a man.” Then all the drawings of Hesperopithecus haroldcooki and “his family” were hurriedly removed from evolutionary literature.

Ota Benga: The African in the cage

After advanced the claim with his book The Descent of Man that man evolved from ape-like living beings, he started to seek fossils to support this contention. However, some evolutionists believed that “half-man half-ape” creatures were to be found not only in the fossil record, but also alive in various parts of the world. In the early 20th century CE, these pursuits for “living transitional links” led to unfortunate incidents, one of the cruelest of which is the story of a Pygmy by the name of Ota Benga.

Ota Benga was captured in 1904 CE by an evolutionist researcher in the . In his own tongue, his name meant “friend”. He had a wife and two children. Chained and caged like an animal, he was taken to the USA where evolutionist scientists displayed him to the public in the St Louis World Fair along with other ape species and introduced him as “the closest transitional link to man.” Two years later, they took him to the Bronx Zoo in and there they exhibited him under the denomination of “ancient ancestors of man” along with a few chimpanzees, a gorilla named Dinah and an orang-utan called Dohung. Dr. William T. Hornaday, the zoo’s evolutionist director gave long speeches on how proud he was to have this exceptional “transitional form” in his zoo and treated caged Ota Benga as if he were an ordinary animal. Unable to bear the treatment he was subjected to, Ota Benga eventually committed suicide.

The ‘Piltdown Man’, the ‘ Man’, Ota Benga…. These scandals demonstrate that evolutionist scientists do no hesitate to employ any kind of unscientific method to prove their theory. Bearing this point in mind, when we look at the other so-called evidence of the “human evolution” myth, we confront a similar situation. Here, there is a fictional story and an army of volunteers ready to try everything to verify this story.