The desperate efforts of neo-Darwinism 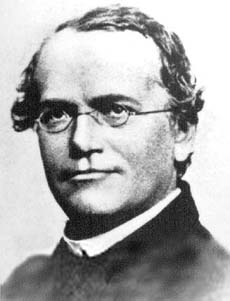 The crisis surrounding Darwin’s theory deepened because of the laws of genetics discovered in the first quarter of the 20th century CE. An Austrian monk, Gregor Mendel, published his work in the proceedings of the local society of naturalists in Brünn, Austria (now Brno, Czech Republic), in 1866 CE, but none of his contemporaries appreciated its significance. It was not until 1900 CE, 16 years after Mendel's death, that his work was rediscovered independently by Hugo de Vries in Holland, Carl Erich Correns in Germany, and Erich Tschermak von Seysenegg in Austria.
Like several investigators before him, Mendel experimented on hybrids of different varieties of a plant. Mendel investigated the common pea plant (Pisum sativum). His methods differed in two essential respects from those of his predecessors. First, instead of trying to describe the appearance of whole plants with all their characteristics, Mendel followed the inheritance of single, easily visible and distinguishable traits, such as round versus wrinkled seed, yellow versus green seed, purple versus white flowers, etc. Second, he made exact counts of the numbers of plants bearing this or that trait; it was from such quantitative data that he deduced the rules governing inheritance.
Nevertheless, a group of scientists who were determined to remain loyal to Darwin endeavoured to come up with solutions. They came together at a meeting organized by the Geological Society of America in 1941 CE. Geneticists such as G. Ledyard Stebbins and Theodosius Dobzhansky, zoologists such as Ernst Mayr and Julian Huxley, paleontologists such as George Gaylord Simpson and Glenn L. Jepsen and mathematical geneticists such as Ronald Fisher and Sewall Right, after long discussions finally agreed on ways to “patch up” Darwinism.
This cadre focused on the question of the origin of the advantageous variations that supposedly caused living organisms to evolve – an issue that Darwin himself was unable to explain but simply tried to side-step -- by depending on Lamarck. The idea they now focused on, was “random mutations”. They named this new theory “The Modern Synthetic Evolution Theory”, which was formulated by adding the concept of mutation to Darwin’s natural selection thesis. In a short time, this theory came to be known as “neo-Darwinism” and those who put forward the theory were called “neo-Darwinists”.
The following decades were to become an era of desperate attempts to prove neo-Darwinism. It was already known that mutations – or “accidents” – that took place in the genes of living organisms were always harmful. Neo-Darwinists tried to establish a case for “advantageous mutation” by carrying out thousands of mutation experiments. All their attempts ended in complete failure.
They also tried to prove that the first living organisms could have originated by chance under primitive terrestrial conditions that the theory posited but the same failure attended these experiments too. Every experiment that sought to prove that life could be generated by chance failed. Probability calculations prove that not even a single protein, the building-blocks of life, could have originated by chance. And the cell -- which supposedly emerged by chance under primitive and uncontrolled terrestrial conditions according to evolutionists – could not be synthesized by even the most sophisticated laboratories of the 20th century CE.
Neo-Darwinist theory is also defeated by fossil records. No “transitional forms”, which were supposed to show the gradual evolution of living organisms from primitive to advanced species as the neo-Darwinist theory claimed, have ever been found anywhere in the world. At the same time, comparative anatomy revealed that species that were supposed to have evolved from one another had in fact very different anatomical features and that they could never have been ancestors or descendants of each other.
Neo-Darwinism was never a scientific theory anyway, but was an ideological dogma that was elevated to the status of a pseudo “religion” by evolution scientists. This is why the champions of the theory of evolution still go on defending it in spite of all the evidence to the contrary. However,  they cannot agree on one point to prove the "truth" behind Darwinism and have proposed many different models to facilitate the realization of evolution as the “right” one. One of the most important of these models is the fantastic scenario known as “punctuated equilibrium”.
Even a layman taking an objective look at the neo-Darwinist theories that are being propagated with such fierce fanaticism, realizes how implausible they appear. When so-called 'rational' scientists adhere to them ignoring common-sense and scientific proof alike, one is forced to wonder whether there is something other than Science at stake.