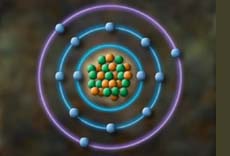 Just as it is impossible to imagine pieces of stone coming together to form living organisms, it is impossible to imagine inanimate atoms coming together by themselves to form living organisms. Think about a lump of rock and a butterfly -- one is inanimate, the other is animate. Yet, when we delve into their essence, we see that both are made up of the same sub-atomic particles.

The following example may elucidate the impossibility of inanimate matter transforming by itself into animate matter in a better way: Can aluminum fly? No. If we mix aluminum with plastic and gasoline, can it fly? Of course it still cannot. Only if we bring these materials together in a way so as to form an airplane, can they fly. So, what makes an airplane fly? Is it the wings, the engine or the pilot? None of these can fly by themselves. In fact, an airplane is manufactured by the assemblage in a special design consisting of different pieces each of which has no ability to fly. The ability to fly is neither derived from aluminum, nor plastic, nor gasoline. The specifications of these substances are important, but the ability to fly can only be gained by bringing these substances together in a very special design.

Living systems are no different. A living cell is formed by the arrangement of inanimate atoms in a very special design. Faculties of living cells such as growth, reproduction and others are results of perfect design rather than the properties of molecules. The design we find at this point is only Allah's creating the living from the dead. Allah Says (what means): "Indeed, Allah is the cleaver of grain and the date seed. He brings the living out of the dead and brings the dead out of the living. That is Allah; so how are you deluded?" [Quran 6:95]

When the Theory of Evolution was advanced in the middle of the 19th century CE, scientific research conducted with primitive microscopes had created the impression that the cell was just a simple lump of matter. However, in the 20th century CE, observation and research made using advanced instruments, and electron microscopes revealed that the cell has an extremely complex structure that could only have been formed as a result of perfect design. Most importantly, research showed that it is absolutely impossible for life to arise spontaneously out of inanimate matter. The source of life is life alone -- a fact which has been proved experimentally too. This is a problem evolutionists can never resolve.

It is for this reason that renowned evolutionary scientists find themselves in a great impasse, and instead of presenting solid scientific evidence, they resort to telling hypothetical 'tales' which amount to nothing but window-dressing. They put forward completely illogical and unscientific claims, that matter has a consciousness, an ability and a will of its own. However, they themselves do not believe these absurd tales and are eventually forced to confess that the main questions that need to be answered cannot be answered scientifically: "The outstanding evolutionary mystery now is: how matter has originated and evolved; why it has taken its present form in the Universe and on the earth, and why it is capable of forming itself into complex living sets of molecules." [C. D. Darlington, Evolution for Naturalists, (NY, John Wiley, 1980) p. 15]

As the evolutionary scientist quoted above confesses, the basic purpose of the Theory of Evolution is to deny that Allah (God) created living beings. This is the scenario claimed by evolutionists, describing the transformation of inanimate and unconscious atoms into animate organisms, and most significantly, into people with high levels of consciousness and intelligence: "After the Big Bang, atoms, containing precisely balanced forces, somehow brought themselves into being...These atoms first transformed themselves into cells with highly complex structures and then produced copies of the cells they formed by splitting into two, after which they started speaking and hearing. Subsequently, these atoms transformed into university professors viewing themselves under the electron microscope and claiming that they came into being coincidentally…"

It is possible to prolong this story but let us stop here and see whether unconscious atoms can spontaneously form the DNA molecule, the cornerstone of life and proteins.

DNA (Deoxyribonucleic Acid), which is located in the nucleus of a cell contains the codes carrying the information that controls the formation of all organs and characteristics of the body. This code is so complex that scientists were only able to translate it (to a very limited extent) as late as the 1940s. Proteins are the building blocks of living beings and play a key role in many vital functions of the organism.

DNA is a series of nucleotides arranged in a special sequence. A protein is a series of amino acids arranged again in a special sequence. First of all, it is mathematically impossible for either DNA molecules or protein molecules that come in thousands of different types to sort out the appropriate sequences necessary for life by chance. Probabilistic calculations reveal that the probability of even the simplest protein molecules achieving the right sequence by chance is zero. In addition to this mathematical impossibility, there is also an important chemical obstacle to the coincidental formation of these molecules. If the relationship between DNA and protein were a result of time, chance and natural processes, then there would be some sort of chemical affinity of DNA and protein to react, as acids and bases have a great tendency to react. In that case, if chance had really played a role, a whole host of other natural chemical reactions would occur among any random fragments of DNA and protein and the living beings we see today would not have formed.

Just as the entire Universe was created from nothing, so were living beings created from nothing. Just as only nothing can come into existence out of nothing by chance, inanimate matter cannot combine by chance to form living beings. Only Allah, Possessor of Infinite Power, Infinite Wisdom and Infinite Knowledge, has the power to do all these. Allah Says (what means): "Indeed your Lord is Allah, who created the Heavens and Earth in six days and then established Himself above the Throne. He covers the night with the day (another night) chasing it rapidly; and (He created) the sun, the moon, and the stars, subjected by His command. Unquestionably, His is the creation and the command; blessed is Allah, Lord of the worlds." [Quran 7:54]