Islam is your birthright - I 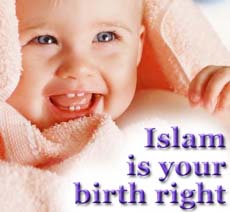 The Creation of man and the entire Universe is not a mere accident or the product of chance. The entire Universe manifests and points to the realization of an All-Powerful Creator. Therefore, it is man's duty to know his Creator, Allah.

Indeed, Allah (The Only True God) has told us about Himself through the Divine guidance He sent to human beings. Humanity received this Divine guidance through the Messengers, may Allah exalt their mention, who were chosen by Allah to convey His message and to be living examples for their people. These Messengers, may Allah exalt their mention, told man who his Creator is, the purpose of existence, and what will happen to him after death. They all brought the same message of Monotheism: the worship of Allah alone. However, they differed only in the canonical teachings that were presented to their peoples.

Over a period, the earlier messages were distorted or lost by later generations. As a result, the pure message was polluted with myths, superstitions, idolatry and philosophical ideologies. However, Allah, the Compassionate, did not leave man straying. He sent Prophets, may Allah exalt their mention, to re-instate the original message and to remind man of the right path. The last of those Prophets was Prophet Muhammad,

(may Allah exalt his mention), who presented Allah's guidance in its final form: Islam, for all times and for all people.

The Five Pillars of Islam

Worship in Islam is an all-inclusive term for all that Allah loves -- private and public words and actions performed  in accordance with His teachings. Islam considers every virtuous action which is performed to carry out the commandments of Allah and in order to seek His pleasure, an act of worship. The Five Pillars of Islam, stand as the framework of the spiritual life of Islam. They include the following:

1. The Declaration of Monotheism

Monotheism is the cornerstone of Islam. A man joins the fold of Islam by believing and declaring his submission to Monotheism: "There is none worthy of worship but Allah and Muhammad is His Messenger". It is the acceptance or denial of this belief that differentiates a Muslim from a non-Muslim.

Every Muslim whose net annual savings are above a certain specified minimum must pay an annual amount of 2.5 percent of his wealth to the poor and needy. Zakah purifies a Muslim’s accrued wealth, fosters the quality of sacrifice and rids him of selfishness and greed. Zakah also helps reduce to resentment and envy between poor and rich members of the society.

4. Fasting during the month of Ramadan

Muslims observe fasting once every year during the month of Ramadan. They abstain from food, drink and sexual contact from dawn to sunset. Fasting teaches sincerity and implants devotion. It develops a sound social consciousness, patience, self-restraint, will-power and an awareness of how the needy members of the society lead their lives. It has been medically proved that fasting also helps to maintain good health.

Hajj is an act of worship, which is to be performed at least once in a lifetime, if one can afford it both financially and physically. During this time, Muslims meet from all corners of the world in a congregation responding to the call of Allah. It demonstrates and refreshes the belief that all Muslims are equal, irrespective of their geographical, cultural or racial origins.


The Six Articles of Faith in Islam

The Muslim believes in the following articles of faith:

1. He believes in the Oneness of God, Allah, Supreme and
Eternal, Merciful and Compassionate, Creator and Provider of everything.

2. He believes in all Messengers of Allah, may Allah exalt their mention, with no discrimination between them. Every nation had a messenger (or more) sent by Allah to convey His message, and to exemplify it for his people or nation. The Quran mentions the names of only twenty five of them and indicates that there have been many others. Those twenty-five include Nooh (Noah), Ibraaheem (Abraham), Ismaa’eel (Ishmael), Ishaaq (Issac), Yaaqoob (Jacob), Moosaa (Moses), Daawood (David), Sulaymaan (Solomon), Yahya (John), ‘Eesaa (Jesus) and finally, Muhammad,

, may Allah exalt their mention. Every Messenger was sent to a specific nation, but Prophet Muhammad,

(may Allah exalt his mention), was sent for mankind. This special status of Prophet Muhammad,

as the seal and last of all the Messengers puts the Muslim in the position, whereby honoring Prophet Muhammad,

, implies honoring all those Messengers who came before him. There are numerous evidences or proofs that Prophet Muhammad,

, is an apostle of Allah, mentioned in his biography. The greatest is the Quran (the Word of Allah), which could only have been conveyed by a Messenger. The Biblical versions, even in their present forms, clearly mention the advent of Prophet Muhammad,

3. A Muslim believes in all the scriptures of Allah, in their original form. These scriptures contain the Divine message which the Messengers, may Allah exalt their mention, received to show their respective peoples the right path of Allah. In the Quran, a special reference is made to the books of Abraham (Suhuf), to the Torah (Law) of Moses, the Zaboor (Psalms) of David and the Injeel (Gospel) of Jesus. However, long before the birth of Prophet Muhammad,

, those revealed books were corrupted or lost. Allah revealed the Quran to Prophet Muhammad,

, as the final revelation and guidance for all humankind for all times.

4. Muslims believe in the existence of angels as part of the unseen world. Angels are purely spiritual beings whose nature requires no food, drink or sleep; they perform specific duties assigned to them by Allah.

5. A Muslim believes in the Day of Judgment. The Quran teaches that life is a test for man, to see whether he will follow the commands of Allah. Accordingly, one should prepare himself with good deeds for the eternal life after death. People will be resurrected on the Day of Judgment to stand before Allah for a just reckoning of their worldly deeds and actions. People with good records will be generously rewarded and warmly welcomed to the Paradise of Allah, while those with bad records will be punished and cast into hell.

6. A Muslim believes that whatever happens in this world is ordered and predestined by Allah. Allah is the Most Wise, so whatever He does has a meaningful purpose, although at times we may fail to understand it fully.

Islam is your birthright -II