The consistency between modern science and Quran -I 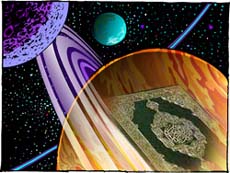 The Quran is the last revelation and a proof, not only to the pagan Arabs 1400 years ago, but also to the scientists of today. Perhaps one of the most remarkable qualities of the Quran is the complete consistency between most of the discoveries of modern Science and the Quran.

One of the first Western scientists to make a serious study of this subject was Maurice Bucaille, who wrote a book called The Bible, The Quran and Science. In this book, he compared the statements concerning natural and scientific data in the Bible and the Quran. He concluded: "The Quran follows on from the two Revelations that preceded it and is not only free from contradictions in its narrations and the sign of the various human manipulations to be found in the Gospels; but provides a quality all of its own for those who examine it objectively and in the light of Science, i.e. its complete agreement with modern scientific data.

Furthermore, statements are found in the Quran (as has been shown) that are connected with Science, and yet it is unthinkable that a man in Muhammad’s time, could have been the author of them. Therefore, modern scientific knowledge allows us to understand certain verses of the Quran, which, until now, it has been impossible to interpret.

The comparison of several Biblical and Quranic narrations on the same subject shows the fundamental differences between the statements in the Bible, which are scientifically unacceptable, and declarations in the Quran which are in perfect agreement with modern data, for example, in the description of Creation and the Flood.

An extremely important complement to the Bible was found in the text of the Quran on the history of the Exodus, where the two texts were very much in agreement with archaeological findings, dating from the time of Moses.

There are major differences between the Quran and the Bible on other subjects, which serve to disprove all the unfounded allegations that Muhammad, is supposed to have copied the Bible to produce the text of the Quran.”

In view of the level of knowledge in Muhammad’s days, it is inconceivable that many of the statements in the Quran which are connected with Science could have been the work of a man. It is, moreover, perfectly legitimate, not only to regard the Quran as the expression of a Revelation, but also to award it a very special place, on the account of the guarantee of authenticity it provides. The presence of scientific statements in the Quran which, when studied today, appear as a challenge to explanation in human terms.”

Some statements involving data confirmed by modern Science are:

1. The Accurate Description of Embryonic and Fetal Development:

At the time of Prophet Muhammad

(may Allah exalt his mention), prevalent theories included those of Aristotle, who thought that a child was formed by the congealing of menstrual blood, catalyzed by the male blood, as rennet does to cheese. In the 18th century CE, Hartsoeker claimed to have seen within the sperm a pre-formed human being through the primitive microscopes.

The Quran reflected none of these theories, describing the embryonic human development with detailed accuracy (which means): "We created man from a quintessence of clay, We then placed him as a drop (Nutfah) in a place of rest firmly fixed, then we made the drop into an ‘Alaqah (leech-like structure) and then we changed the leech-like structure into a Mudghah, (chewed-like substance) and then We made out of that chewed-like substance bones; then We clothed the bones with flesh; then We caused him to grow and come into being and attain the definitive form. Blessed be Allah, The Perfect Creator. After that, at length you will die. Again, on the Day of Judgment, you will be raised up." [Quran 23:12-16]

further explained the meaning of ‘Nutfah’ as meaning both the male sperm and female ovum. The word ‘Alaqah has three meanings in Arabic:
1) A thing that clings
2) A blood clot
3) A leech-like thing.
All three accurately describe the first stage of the developing embryo. After the fertilization of the egg, a blastocyst develops, which has on its exterior villocites, which literally "cling" to the wall of the uterus. It then goes on to resemble a leech in both appearance and behavior and goes on to resemble a blood clot.

The next stage, when it becomes "chewed-like" substance, is also accurate. It is also true that the bones precede the development of muscle and flesh. The Prophetic traditions state: "When forty-two nights have passed over the conceptus, Allah sends an Angel to it, who shapes it, makes its ears, eyes, skin, flesh and bones. Then he says: 'O Lord! Is it male or female?' And your Lord decides what He wishes and then the angel records it." [Al-Bukhari]

This accurate information gives the correct time for the recognizable growth of the features described, and the sex of the fetus cannot be definitely determined until just after forty-two days.

This was not known until the invention of powerful microscopes only decades ago. Professor and Chairman of the Department of Anatomy at the University of Toronto, Canada, and author of The Developing Human, Keith Moore, who is considered one of the world’s leading embryologists, said concerning these statements in the Quran and authenticated hadeeth: "Until the 19th  century CE, nothing was known about classifying the stages of human development. A system of staging human embryos was developed around the end of the 19th century CE based on alphabetical symbols.

During the 20th century CE, numerals were used to describe 23 stages of embryonic development. This system of numbering the stages is not easy to follow and a better system would be based on the morphological changes. In recent years, the study of the Quran has revealed another basis for the classification of the stages of the developing embryo, which is based on easily understood actions and changes in shape. It utilizes terms which were sent from God to Muhammad by the Angel Gabriel and recorded on the Quran… It is clear to me that these statements must have come to Muhammad from God because almost none of this knowledge was discovered until many centuries later. This proves to me that Muhammad must have been a Messenger of God.”

The Consistency between Modern Science and Quran -II