The entire world is asking: what is Islam? 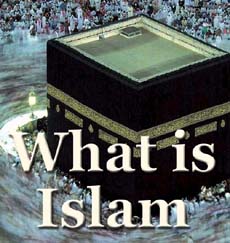 According to various reports in the Arab press, a wave of Americans has converted to Islam since September 11.

'Alaa Bayumi, director of Arab Affairs at the Council for American-Islamic Relations (CAIR), wrote in the daily Al-Hayat : "Non-Muslim Americans are now interested in getting to know Islam. There are a number of signs... Libraries have run out of books on Islam and the ... English translations of the Quran head the American best-seller list.

The Americans are showing increasing willingness to convert to Islam since September 11. Thousands of non-Muslim Americans have responded to invitations to visit mosques, resembling the waves of the sea (crashing on the shore) one after another. All this is happening in a political atmosphere that, at least verbally, encourages non-Muslim Americans' openness towards Muslims in and in the Islamic world, as the American president has said many times in his speeches. ..."

CAIR Chairman Nihad Awad told the Saudi paper 'Ukaz: "34,000 Americans have converted to Islam following the events of September 11, and this is the highest rate reached in the US since Islam arrived there."

According to Dr. Walid Al-Fatihi, instructor of medicine at has recently become a center of Islamic proselytizing aimed at Christians. On September 22, 2001, Al-Fatihi sent a letter to the Egyptian weekly Al-Ahram Al-Arabi, in which he described the unfolding of events since September 11.

"On Saturday, September 15, I went with my wife and children to the biggest church in ( Church) in by official invitation of the Islamic Society of Boston, to represent Islam by special invitation of the senators of " wrote Fatihi. "Present were the mayor of his wife and the heads of the universities. There were more than 1,000 people there, with media coverage by one of 's main television stations. We were received like ambassadors. I sat with my wife and children in the front row, next to the mayor's wife. In his sermon, the priest defended Islam as a monotheistic religion, telling the audience that I represented the Islamic Society of Boston.

After the sermon was over, he stood at my side as I read an official statement issued by the leading Muslim clerics condemning the incident (i.e., the attacks). The statement explained Islam's stance and principles, and its sublime precepts. Afterwards, I read verses of the Quran translated into English... These were moments that I will never forget, because the entire church burst into tears upon hearing the passages of the words of Allah!

"Emotion swept over us," Al-Fatihi continued. "One said to me: 'I do not understand the Arabic language, but there is no doubt that the things you said are the words of Allah.' As she left the church weeping, a woman put a piece of paper in my hand; on the paper was written: 'Forgive us for our past and for our present. Keep proselytizing to us.' Another man stood at the entrance of the church, his eyes teary, and said: 'You are just like us; no, you are better than us.'"

Al-Fatihi recounts the next day the Islamic Society of Boston issued an open invitation to the Islamic Center in .
"We did not expect more than 100 people, but to our surprise more than 1,000 people came -- among them the neighbors, the university lecturers, members of the clergy, and even the leaders of the priests from the nearby churches, who invited us to speak on Islam," Fatihi wrote. "All expressed solidarity with Muslims. Many questions flowed to us. Everyone wanted to know about Islam and to understand its precepts.

Of all the questions, not a single one attacked me; on the contrary, we saw (the people's) eyes filling with tears when they heard about Islam and its sublime principles. Many of them had never heard about Islam before. Well, they had heard about Islam only through the biased media. That same day, I was invited again to participate in a meeting in the church, and again I saw the same things.

On Thursday, a delegation of 300 students and lecturers from Harvard visited the center of the Islamic Society of Boston, accompanied by the American Ambassador to . They sat on the floor of the mosque, which was filled to capacity. We explained to them the precepts of Islam, and defended it from any suspicions (promulgated in the media). I again read to them from the verses of Allah, and (their) eyes filled with tears. The audience was moved, and many asked to participate in the weekly lessons for non-Muslims held by the Islamic Center..."

Al-Fatihi says on September 21, the Muslims participated in a closed meeting with the Governor of Massachusetts. They discussed introducing Islam into the school curriculum. He claims Gov. Jane Swift agreed to implement their plans.

"These are only some of the examples of what happened and is happening in the city of and in many other American cities, during these days," Al-Fatihi continued. "Proselytizing in the name of Allah has not been undermined, and has not been set back 50 years, as we thought in the first days after September 11. On the contrary, the 11 days that have passed are like 11 years in the history of proselytizing in the name of Allah.

I write to you today with the absolute confidence that over the next few years, Islam will spread in America and in the entire world, Allah willing, much more quickly than it has spread in the past, because the entire world is asking: 'What is Islam?!'"