The call to Islam 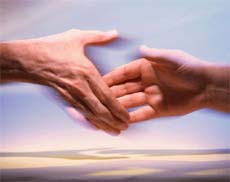 Furthermore, Islam is the only religion accepted by Allah. The Holy Quran says (what means): "And whoever chooses a way of life other than Islam, this will not be accepted from him. And in the Hereafter he will be among the losers." [Quran 3:85]

Thus Islam, stands as the only hope for the salvation of all nations -- nations that are in conflict with themselves and with each other; people who have lost faith and confidence in themselves and in others; States which are building their welfare at the expense of others’ lives; communities that have reached the immeasurable depth of moral degradation.

Humanity stands today on the brink of destruction. And it is our moral duty to extend to them Islam's brotherly love and compassion, so that they experience the community of faith and righteousness brought up by the best of educators, Muhammad

(may Allah exalt his mention) who said: "I have been sent to perfect the beauties of moral conduct."

"O Prophet, Truly We have sent you as a witness, a bearer of glad tidings, and a warner. And as one who invites to Allah by His leave and as a lamp spreading light. Then give the glad tidings to the believers, that they shall have from Allah a very great bounty." [Quran 33: 45-47]

The challenge is clear. It is now our turn to take up the responsibility of spreading Allah's Message after the Prophet

The Noblest Example Provided by the Messenger of Allah:

received the Divine Message willingly and took upon himself the greatest responsibilities ever conceivable. Undoubtedly, the prophethood posed the heaviest and most troublesome burden on the shoulders of Prophet Muhammad

faced hardships, persecution, torture; put up with stubborn ignorance, relentless enmities, treacherous tribes and endured insolence, ill-treatment and oppression. Yet, in spite of all this, the Messenger of Allah

was commanded by his Lord to call people to piety, modesty and submission to the Sustainer of the universe; to warn those who rejected the message and give glad tidings to those who believed; and to fight those who obstructed the path to the truth of Allah's guidance.

The Prophet of Allah

was solemnly reminded on a number of occasions through the Quran to preach and spread Allah's Message. Allah, Most High Says (what means): "O Messenger! Verily We have sent you as a witness, one giving glad tidings and a warner and as one who invites (people) to Allah by His permission, and an illuminating light." [Quran 33: 45-46]

The very word Messenger implies that the person to whom this name is attributed carries a message, which invariably concerns everybody according to his frame of mind, inquisitiveness and thirst for truth.

Allah's address to His Messenger

recurs time and again to remind him that it is his duty to invite people to Allah, to be steadfast in conveying Allah's message to mankind and not to lose sight of this sublime goal, even for a moment. Allah, the Most Glorious and the Most High, addresses His Messenger Muhammad

Here are some more injunctions to the same effect (what mean): "And let nothing keep you back from the signs of Allah after they have been revealed to you. And invite (men) to your Lord, and be not of the company of polytheists." [Quran 23: 87]

It is a fact that Allah, out of His Mercy sent many Prophets, may Allah exalt their mention, at different times and places. Their mission was the same – all of them, without exception, invited people to believe in Allah and worship Him alone.

Allah, the Most Exalted, Says (what means): "And verily We have sent to every nation a Prophet so that they worship Allah and shun the idols." [Quran 16: 36]