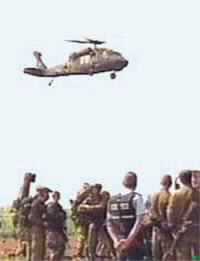 Vice President Dick Cheney said on Sunday it was unlikely that he would meet with Palestinian leader Yasser Arafat before this week's Arab League summit in Beirut.

Cheney, who refused to see Arafat during a 10-day trip to the region that ended last Wednesday, did not rule out a meeting in the future, but said Arafat had not yet done enough to halt attacks on Israel.

"I will not hold the meeting unless we see those circumstances that we specified," Cheney said on NBC's "Meet the Press" program. "To date we haven't seen them. But if we do then I'm prepared to go forward with the meeting."

After a long chase on the southern slopes of the Golan Heights, Israeli troops killed four men Sunday afternoon near Tel Katzir, who had infiltrated across the Jordanian border into Israel.

Around 2 P.M., soldiers from the elite Egoz unit spotted the four close to the border with Jordan and opened fire. Three were killed instantly, while one managed to escape. Troops tracked down the fourth man a short while later and shot him dead, Israeli press said. It is not known if they were civilians or armed militants.

The search for the infiltrators was launched after soldiers discovered tracks near the Israeli-Jordanian-Syrian border Sunday morning, shortly after a signal was recorded, denoting that something had touched the electronic border fence. IDF and police forces combed the area from first light for signs of a possible infiltration.

Ariel Sharon has expressed the wish to attend the Arab League Summit in the Lebanese capital of Beirut later this week, and has asked the United States to intervene in his favor.

"I suggested I'll go to Beirut to talk to the Arabs directly about what might be achieved," the prime minister said in his interview with the Washing Post published on Saturday.

"I would welcome an American initiative to advance such a move," he declared.

Sharon told the paper that he intends to present the Arab leaders with his own peace plan, which "comprised of three stages":

The first stage would be a ceasefire as defined by the Tenet plan and the implementation of the Mitchell recommendations.

The second would consist of a "long-term interim agreement granting the Palestinians territorial contiguity without naming final borders."

The third stage would be the establishment of final borders to be "determined by the future relations between Israel and the Palestinians and in the spirit of UN resolutions... 242 and 338."

A senior political source said Saturday that Sharon made the suggestion during talks with visiting U.S. Vice President Richard Cheney early this week.

"Sharon said that he was ready to go to the Arab summit in Beirut to present Israel's views on the Saudi proposals. It is important the Arab states hear Israel's views," the source was quoted by reports here as saying.

"Cheney took note of it... but there has been no answer from the Americans,?±the source added.

Asked if Israel would give permission for Palestinian National Authority Chairman Yasser Arafat to attend the summit, Sharon said that Israel has "not yet decided whether to let him go."

Palestinian officials said Saturday, however, that Arafat does plan to attend the summit, where the Saudis are expected to present their peace initiative calling for full Israeli withdrawal to the pre-1967 War lines in exchange for normalization of ties with the Arab world.

In a joint press conference with Cheney, Sharon said that Arafat would be allowed to leave the Palestinian territories only if Israel and the Palestinians reached a ceasefire and started to implement the Tenet plan.

There had been high expectations about the possibility of Arafat's travel to Beirut after Cheney promised he would meet Arafat somewhere in the Middle East after the Israelis and Palestinians implement the Tenet plan.