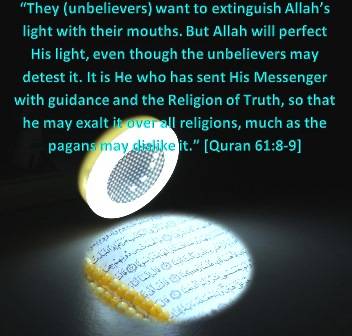 The Messenger of Allah, Muhammad

said: "The best amongst you are those who learn the Quran and teach it.” [Al-Bukhari]

What is the Quran?

The Quran is the Book of Allah, which He chose to be the Final of the Heavenly Books. He, the Merciful and Most High, revealed it to Prophet Muhammad

as the source for the Last Religion and a guidance for mankind. Its revelation was a turning point for humanity; it was the power that changed the world, shifted the flow of history, saved and reformed humanity, so much so that the entire existence appeared as if it had been recreated anew.

The Quran is the strongest evidence in support of Prophet Muhammad

and his greatest sign. It is the proof of his prophethood and trustworthiness. Allah, the Most Exalted, Says in the Quran (what means): “They (unbelievers) want to extinguish Allah’s light with their mouths. But Allah will perfect His light, even though the unbelievers may detest it. It is He who has sent His Messenger with guidance and the Religion of Truth, so that he may exalt it over all religions, much as the pagans may dislike it.” [Quran 61:8-9]

The Quran is the guidance that mankind needs to achieve freedom, happiness and success, in this life and the next.

The Quran is a complete and comprehensive Book.  It deals with the issues man needs, not only for salvation in the Hereafter, but also to achieve peace, justice and prosperity in this world.  These issues are discussed in the Quran in three main categories: Theology, Fables and Wisdom, Islamic Law (or Sharee’ah).  Thus, it provides the basic principles, vision and knowledge necessary for planning and leading a good life. All this is packaged in a very comprehensive approach to living that combines the pursuit of worldly affairs as well as those of the Hereafter. Allah Almighty Says in the Quran (what means): “And seek by the wealth provided for you by Allah the eternal abode (the Hereafter) but do not forget and (and forsake) your share of this world.  Be kind and good (to others) just as Allah was kind and good to you. And desire not corruption in the land. Indeed, Allah does not like corrupters.” [Quran 28:77]

The Quran has an inimitable style and format that has never been seen or experienced in any other book or methodology. The richness of its text and the discourse it offers are unprecedented and unmatched in their eloquence, proficiency, fluency, conformance and harmony. Not only is the Quran a linguistic masterpiece and magnum opus par excellence, it is indeed a miracle in the fullest sense of the word. Those reciting it never become weary of it and those who ponder upon its meanings do not doubt it; rather, they always discover fresh insights and knowledge. It guides those seeking guidance and increases those who believe in it in faith. Its first parts resemble its latter parts and it can only be likened to itself in its unparalleled beauty.

The Quran is free from contradictions and those who understand the Arabic language and contemplate upon its chapters and verses will find harmony between its various parts.  Allah, the Most High, Says (what means): “Why do not they contemplate the Quran?  And if it were from other than Allah, they would have found in it numerous discrepancies.” [Quran 4:82] Indeed, every time the disbelievers tried to raise issues of contradictions in the Quran, Muslim scholars proved beyond doubt that no part of the Quran belies or contradicts another. The reason is that what may appear as a 'contradiction' in the Quran is actually what the Quran calls Muhkam (clear) and Mutashabih (unclear) verse. This is actually a part of the Quran’s textual strength and miraculous composition.

The Islamic Medical Sciences Organization declared the striking results of a study conducted by Dr. Ahmad Al-Qadhi over a group of volunteers from who were subject to a recitation of the Holy Quran. A trace of a tranquilizing effect was recorded at a whole rate of 97%. Although many of these volunteers do not know Arabic, yet involuntary physiological changes that led notably to alleviate the acuity of tension they had before were observed in their nervous systems.

Furthermore, an experiment of EEG during Quran rehearsal revealed that while listening to Quran, the encephalic waves moved from the fast pattern of vigilance (12-13) wave/ second to the slow pattern (8-18) wave/ second; indicating the state of deep calmness. Non-Arabic speaking persons felt reassured, quiet, and complacent during the process of listening to Quranic verses, in spite of their inability to understand the meanings. This is one of the miracles of the Holy Quran.

revealed that miracle when saying;

“No people assembled in one of the houses of Allah (mosques), and recite and study the Book of Allah (among themselves), except that tranquility would prevail over them, mercy would encompass them, the angels would surround them, and Allah would make a mention of them in the presence of those near Him (angels).” [Muslim]