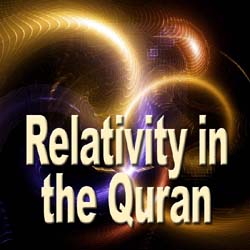 The conclusion to which we are led by the findings of modern Science is that time is not an absolute fact, as supposed by materialists, but only a relative perception. What is more interesting is that this fact, undiscovered by Science until the 20th century CE, was imparted to mankind in the Quran fourteen centuries ago. There are various references in the Quran to the relativity of time.

Allah also Says (what means): “And on the Day when He shall gather them together, (it will seem to them) as if they had not tarried (on earth) longer than an hour of a day: they will recognize each other”. [Quran 10:45].

In some verses, it is indicated that people perceive time differently and that sometimes people can perceive a very short period of time as a very lengthy one. The following conversation of people held during their judgment in the Hereafter, is a good example of the saying of Allah (which means): “He will say: ‘What number of years did ye stay on earth?’ They will say: ‘We stayed a day or part of a day: but ask those who keep account.’ He will say: ‘Ye stayed not but a little, - if ye had only known!’” [Quran 23:112-114].

In some other verses it is stated that time may flow at different paces in different settings, as in the saying of Allah (which means): “And they ask you to hasten on the torment! And Allah fails not His promise. And verily, a day with your Lord is like a thousand years of what you reckon.” [Quran 22:47]

And also in the saying of Allah (which means):  “The angels and the Spirit ascend unto him in a day the measure whereof is (as) fifty thousand years.” [Quran 70:47].

These verses are all manifest expression of the relativity of time. The fact that this result only recently understood by Science in the 20th century CE was communicated to man 1,400 years ago by the Quran is an indication of the revelation of the Quran by Allah, Who encompasses the whole time and space.

The narration in many other verses of the Quran reveals that time is a perception. This is particularly evident in the stories. For instance, Allah has kept the Companions of the Cave, a believing group mentioned in the Quran, in a deep sleep for more than three centuries. When they were awoken, these people thought that they had stayed in that state but a little while, and could not figure out how long they slept; Allah Says (what means): “Then We drew (a veil) over their ears, for a number of years, in the Cave, (so that they heard not). Then We raised them up that We might know which of the two parties would best calculate the time that they had tarried”. [Quran 18:11-12].

In a later verse of this very chapter Allah Says (what means): “Such (being their state), we raised them up (from sleep), that they might question each other. Said one of them: “How long have you stayed (here)?” They said: “We have stayed (perhaps) a day, or part of a day.” (At length) they (all) said: “Allah (alone) knows best how long you have stayed here….” [Quran 18:19].

The situation told in the below verse is also evidence that time is in truth a psychological perception. Allah Says (what means): “Or (take) the similitude of one who passed by a hamlet, all in ruins to its roofs. He said: “Oh! How shall Allah bring it (ever) to life after (this) its death?” but Allah caused him to die for a hundred years, then raised him up (again). He said: “How long did you tarry (thus)?” He said: (Perhaps) a day or part of a day.” He said: “Nay, you have tarried thus a hundred years; but look at your food and your drink; they show no signs of age; and look at your donkey: And that We may make of you a sign unto the people, Look further at the bones, how We bring them together and clothe them with flesh.” When this was shown clearly to him, he said: “I know that Allah has power over all things.”  [Quran 2:259].

The above verse clearly emphasises that Allah Who created time is unbound by it. Man, on the other hand, is bound by time that is ordained by Allah. As in the verse, man is even incapable of knowing how long he stayed in his sleep. In such a state, to assert that time is absolute (just like the materialists do in their distorted mentality), would be very unreasonable.