Remedies for the heart are within the Quran 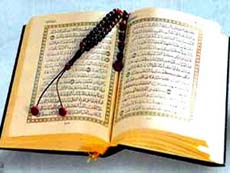 It is narrated on the authority of An-Nu'maan Ibn Basheer

who said : "I heard the Messenger of Allah

say : "That which is lawful is plain and that which is unlawful is plain and between the two of them are doubtful matters about which not many people know. Thus, he who avoids doubtful matters clears himself in regard to his religion and his honor, but he who falls into doubtful matters falls into that which is unlawful, like the shepherd who pastures around a sanctuary, all but grazing therein. Truly, every king has a sanctuary, and truly Allah's sanctuary is His prohibitions. Truly in the body there is a morsel of flesh which, if it be whole,all the body is whole  and which, if it be diseased, all of it is diseased. Truly it is the heart." [Al-Bukhari and Muslim]

Diseases of the heart are a mixture of suspicions and lusts which can lead our souls into turmoil and despair. However, Allah Almighty has provided us with a special prescription that will cleanse and heal our diseased hearts: The Quran.

The Quran provides the healing for many types of ailments:

1.     It contains proofs and clear evidences which separate right from wrong.

2.     It adequately and clearly negates our doubts.

No book on this earth other than the Quran provides such comprehensive proofs and testimonies in relation to exalted matters of monotheism, confirmation of Allah’s attributes, the Day of Judgment, Prophethood and refutation of incongruous doctrines and degenerate opinions.

Although the Quran offers a genuine cure for the evils of suspicions and doubts, its benefit depends to a large extent on comprehending its essence and purpose. Those who are blessed with such faculties would have the ability to distinguish between right and wrong, as clearly and easily as they can distinguish between day and night.

They would know for certain that all other knowledge and concepts prevailing among people are either traditions or false presumptions; however fanciful and appealing they may appear, these would be unable to offer a substitute for the Truth or genuine matters as encapsulated in the Quran and would provide no benefit.

The Hadeeth (narration) of Prophet Muhammad

compares the futility of such efforts to: “Inferior camel’s meat on top of a rough mountain, neither the hill is easy to climb nor the camel is healthy enough to get down the hill.” [Al-Bukhari]

In fact, the knowledge obtained by theologians could be found in the Quran with a much better elaboration and explanation, for the theologians are inclined to affectation, wordiness and perpetuating perplexity. They assume that their attitudes help in refuting suspicions and doubts, but contrary to their presumption, these suspicions and doubts are better served by their efforts. If healing and guidance, knowledge and certainty could not be obtained from the Quran and the teachings of Prophet Muhammad

it would be impossible to obtain them from the utterances of those perplexed skeptics.

The Quran draws its ability of healing the diseases of lusts by its wisdom and fair exhortation, through the renouncement of earthly pursuits and the pursuance of the Hereafter. It draws upon parables and narrations containing lessons to be pondered. If the heart assimilated these qualities, it would certainly be inclined towards good deeds and renounce the evil ones.

The Quran also eliminates spiritual diseases which corrupt our intentions and prompt us towards ill deeds; hence the heart heals and returns to its normal nature, where its facultative and self-acquired deeds excel. The body also returns to its normal functioning by rejecting whatever contradicts the right guidance, just like an infant who accepts nothing but milk. In this course of affairs, the heart feeds on faith and the Quran which provides it with reprimands, consolidation, support, gladness, joy and invigoration to establish its authority, as a body is nourished by what develops and strengthens it.

The heart and the body would not flourish without adhering to the Quran. Even if they attained some of the desired results from another source, the attainment would be very minor and would not serve the purpose and desired end result.