Contribution of Islam to the world's civilization 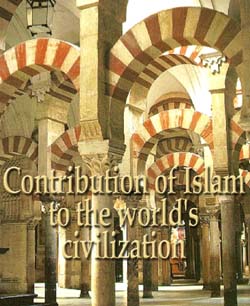 Let us remember our great and glorious heritage by briefly surveying what Islam has already contributed to the world's civilization, education, culture and to scientific development.

Unlike Christianity where Religion and Science are two separate elements, the study of Science has always been compatible with Islam.

Many young Muslims are discouraged when they see the poor standard of living of Muslims throughout the world and their limited opportunities. They also know the undeveloped status of technology within the Muslim countries in comparison with the West. From these observations, they immediately leap to the conclusion that the Muslim countries are ‘backward’, because Islam cannot adapt itself to the changing conditions; cannot assimilate new knowledge. Some even go so far as to say that Islam is actually against progress and against scientific advancement. However, those Muslims who have studied the later part of Islamic history will know that this is a complete fallacy and misconception.

Let us do a brief review of the contribution of Islam to civilization as we know it.

The Arabs developed these functions in trigonometry and Ibn Moosaa's work Hisaab-Al Jab-Wal Muqaabala (The Calculation of Integration and Equation) presented 800 examples in the 8th century CE. His work was translated from Arabic into Latin and until the 16th century CE, it was 's main textbook on the subject.

Muhammad bin Moosaa Al-Khawaarizmi is considered to be one of the founders of Algebra. The word ‘Algorithm’ or 'Algorizm' is a corruption of his name or the name of the town Khwaarizm (Kheva), in what is now Uzbekistan, where he was born. He adopted the use of ‘cipher’ (zero), that was devised in India some centuries earlier, a numeral of fundamental importance, leading up to the so-called arithmetic of positions and the decimal system. The very word ‘zero’ is a derivative of the Arabic ‘sifr’ or ‘cipher’. His pioneering work on the system of numerals is well known as "Algorithm," or "Algorizm." In addition to introducing the Arabic numerals, he developed several arithmetical procedures, including operations on fractions.

Another great mathematician was Omar Khayyaam, who offered to the world geometric and algebraic solutions of the second degree. Naseeruddeen wrote the treatise on quadrilateral trigonometry, as well as plain and spherical geometry.

Kamaaluddeen examined the refraction of sunlight in raindrops and offered an explanation of the genesis of primary and secondary rainbows. The story of the invention of the pendulum and the presentation of a water clock to Emperor Charlemagne by Haaroon Ar-Rasheed is well known.

The great historian Gibbons wrote in his Decline and Fall of the Roman Empire (Volume 5) that the science of chemistry owes its origin and improvements to the Muslims.

The development of the science of mechanics in Islam is an act of genius. Moosaa bin Shaakir described one hundred pieces of mechanical equipment in his book of artifices. Other outstanding Muslim treatises included Al Kitaab Fi Ma`rifat Al-Hiya Al-Handasiyyah (The Book of the Knowledge of Ingenious Geometrical Contrivances) by Abul Fiaz bin Al Raz and Al Kitaab Meezanal-Hikmah (The Book of Balance and Wisdom) by Al-Khazini. He also did work on accurate weighing, and determination of the specific gravity of substances.

In the field of optics, Camera Obscura was invented by Ibn Haytham in 1038 CE.

As far as geography was concerned, Muslim scientists established that the world was round in the 9th century CE, and the first map of the globe was made during the Caliphate of Ma’moon.

This was one of the earliest skills attained by the Muslims. As early as the 8th century CE, high quality paper was being manufactured in Samarqand. was known to have its first paper mill in the year 900 CE. The earliest Arabic manuscript written on paper that has been discovered is the Ghareeb Al Hadeeth by Abu ‘Ubayed, dated 837 CE. It can be seen in preserved in the library at the .

Under Islamic rule, was an industrial center. It was one of the wealthiest and most thickly populated of the European countries. Muslims were leading in weaving wool, producing silk, pottery, jewelry, leather and perfume industry. In the Middle Ages, world trade was commanded by Muslims and Bukhaara and Samarqand remained centers for world fairs until the 16th century CE. The Bayt Al-Hikmah at contained two million books, the library at contained some three million, but this library was burned down by the Christians during the first Crusade.

Miracles of the Quran

Let us consider the hundreds of scientific facts mentioned in the Holy Quran. For example, the fact that the earth was previously a part of the sun and after its separation, it became a habitable place for humankind, as mentioned in chapter 21, verse 30. That matter is made up of sub-atomic particles (chapter 10, verse 61). That the embryo in the mother's womb in enclosed by three epithelial coverings (chapter 39, verse 6). That each human being has a unique fingerprint (chapter 75, verse 4) etc. There are thousands of other scientific facts in the Holy Quran.

Regrettably, today the West is at its peak and we have lagged behind so far. However, our downfall is not due to Islam, as the West would like us to believe, but due to our sheer neglect of Islamic principles. We must realize that Islam is undeniably the most progressive religion, which is in fact a way of life with a very wide scope.

Of course, life is a very hard struggle. However, struggle is an inbuilt instinct of human nature. Struggle is a way but not an accomplishment or attainment in itself. We should make an effort and struggle but at the same time make Du'aa. This is where Tawakkul, i.e. trust in Allah comes because destiny supersedes thought. We must trust in Allah for our betterment, because if success depended merely upon one’s personal struggle, then nobody in the world would be unsuccessful. Furthermore, struggle is itself predestined by Allah. Man should do his best, then leave the rest to Allah, Most High.