Every nation was sent a messenger 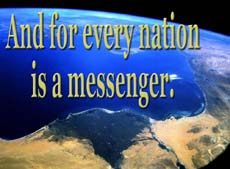 It is an Islamic belief that every nation was sent a Messenger for their guidance. The important matter was the concept of Tawheed, or belief in the Oneness of Allah). The secondary matter was Sharee'ah, or religious Law, which kept changing from tribe to tribe and nation to another. Allah the Most High alone knows what is good for His creation.

As it is mentioned in the Quran, what means: "And for every nation is a messenger. So when their Messenger comes, it will be judged between them in justice, and they will not be wronged." [Quran 10:47] And: "And We certainly sent into every nation a messenger, [saying]: 'Worship Allah and avoid Taaghoot [i.e., false deities]'. And among them were those upon whom error was [deservedly] decreed. So proceed [i.e., travel] through the earth and observe how was the end of the deniers." [Quran 16:36]

Some of these Messengers are mentioned in the Quran by Allah and some of them are not, as the Quran says, what means: "And We have certainly sent messengers before you [O Muhammad

So, we decided to have a look at the issue of Messengers sent to various tribes and nations and take the advice mentioned in the Quran, which means: "… So proceed [i.e., travel] throughout the earth and observe how was the end of those who denied." [Quran 3:137]

The content in this post is a discovery by serendipity. The information sometimes came from lazy browsing through the books on social anthropology and sometimes from serious research.

The material below is an attempt to show how different tribes in different parts of the world had Monotheism, or worship of the One True God. But along with the True God some subservient gods were also worshipped in some cases. It is taken from a book called "The Kapauku Papuans of " by Leopold Pospisil. It is a case study of a Stone Age Kapauku tribe that led their aboriginal lives undisturbed by the spreading western civilisation until 1938.

The Kapauku Papuans are mountain people who belong to one of the several tribes whose members inhabit the central highlands of western . Their country, most of which lies 1500m above sea level, is composed of rugged mountain chains and deep valleys.

The Kapauku have an interesting worldview. Regarding the Creator of the universe, the Kapauku believe that the universe itself and all existence was Ebijata, 'designed by Ugatame', the creator. Ugatame has a dual nature and is manifested to the people by the duality of the sun and the moon. To them, the sun and moon are definitely not creators themselves - they are only manifestations of Ugatame to make his presence known to the people.

Ugatame is omniscient, omnipotent and omnipresent, credited with the creation of all things and with having determined all events. Obviously, Ugatame is beyond existence because to the Kapauku, all that exists must be of phenomenal nature; one must be able to see, hear, smell, taste or feel it. But the creator is beyond this phenomenal dimension, because of the simple reason that he created it.

Here is an interesting argument between a Kapauku and a Christian Missionary: "In the year 1955 a very old man from the Mapia region, supported by his two sons, managed to meet a Christian missionary. His main purpose was a problem he wanted to have clarified before he died. He could not understand how it is possible that the white man could be so clever and ingenious in designing such amazing contrivances as aeroplanes (which the old man could see flying over his valley), guns, medicines, clothes, and steel tools, and at the same time be so primitive and illogical in his religion.

"How can you think," he argued, "that a man can sin and can have a free will, and at the same time believe that your God is omnipotent, that He created the world and determined all the happenings? If He determined all that happens, and (therefore) also the bad deeds, how can a man be held responsible? Why, if he is omnipotent, did the Creator have to change himself into a man to allow himself to be killed (crucified) when it would have been enough for him just to order men to behave?" The notion that anything can be absolutely bad or good was quite incomprehensible to him. Furthermore, the Christian notion of man resembling God in appearance appeared to him as utterly primitive (or "tabe-tabe", meaning stupid)!"

It is quite surprising that a tribe thought to be from the Stone Age could argue so rationally and logically with a Christian missionary on the aspect of God. We Muslims also use the same arguments when it comes to the concept of God. It comes as no surprise to us that when the Kapauku heard that God became man they called the concept "primitive" and "tabe-tabe" (stupid). Well, 'polemics' against Christianity started in the Stone Age itself and Muslims are not to be blamed for that!

Lastly, where is this Ugatame, their supreme god, residing? In the view of Kamu Kapauku, the world is a flat block of stone and soil that is surrounded with water and extends indefinitely into the depths thus providing no room for an underworld. Above the earth is a solid bowl of blue sky that limits the known world at the horizon. Beyond the solid bowl of sky exists another world that may be similar to ours, the abode of Ugatame, the Creator.

It is quite surprising that the Kapauku knew where their God is. The Pharaoh knew where the God of Moosaa (Moses), may Allah exalt his mention, is, as the following verse mentions, which means: "And Fir'awn (Pharaoh) said: 'O eminent ones! I have not known you to have a god other than me. Then ignite for me, O Haamaan, [a fire] upon the clay, and make for me a tower that I may look at the God of Moosaa. And indeed, I do think he is among the liars." [Quran: 28:38]

Most people today are not aware where God is. They say that God is everywhere, in us and in them. For Muslims it is an important point of creed and must be known. Know you Lord before everything else!

To conclude, the Islamic belief is that every nation on the earth was sent a Prophet for their guidance. As time passed by, corruption was introduced in the religion and instead of worshipping One true God, false deities were worshipped along with Him. The best example would be of before the advent of Prophet Muhammad

(may Allah exalt his mention). They worshipped idols like Al-'Uzzaa along with Allah, the One and only true God.