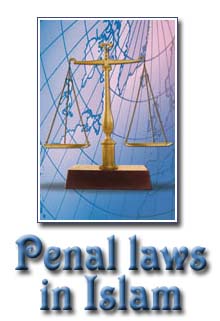 In Islam, there are specific penal laws for major crimes. The underlying principles here are the following. Firstly, no matter how ideal a religion is, there will be some forms of transgression by some persons. Secondly, there are major crimes that need major punishments.

The major transgressions, according to Islam, are murder, highway robbery, theft, adultery, and false accusation of adultery. These transgressions affect the individual and the society and create a state of confusion and insecurity.

The principles that govern penal laws in Islam are:

The Penalty for Murder:

As for murder, the Islamic punishment for intentional murder is the execution of the murderer. Pardoning is possible if the closest relative of the murdered person accepts blood-money. However, if murder is unintentional, blood-money takes the place of the death sentence.

In countries that have abolished capital punishment, we notice that such a cancellation has ended up with more murders and more murderers. Any toleration of murders will encourage more murders and the result is the loss of security.

In countries that apply the death sentence for murder, one notices that such a sentence minimises the cases of murder. When a person knows that he will be killed if he kills, he will think at least a thousand times before he considers committing a murder.

Islam legislated killing as a punishment for murder fourteen centuries ago. Allah is the Most Merciful: man need not wait centuries until sociologists finish their research on the subject or until parliaments vote for a solution!

Allah, through the Holy Quran, shows us the right way that provides society with security: intentional murder is punished by killing the murderer. Although killing is a severe punishment, it is fair because murder itself is an even more severe action and such a punishment is necessary because without it more murders are encouraged.

The Penalty for Highway Robbery:

Another crime that is specified in the Quran is highway robbery. The punishment of a highway robber may take one of these forms depending on the seriousness of the case. The robber may be put to death, or crucified, or have his hand and leg cut off on opposite sides, or imprisoned.

Of course, highway robbers threaten the security of the society, endanger the lives of individuals, and rob persons of their money. If such persons are punished softly, the result is more and more robbers as is the case of countries that deal with such criminals leniently.

On the contrary, in a country like Saudi Arabia, which applies Islamic penal laws, we find that the cases of murder and robbery are the fewest in the whole world. We must remember that the function of the punishment is double: the criminal himself is punished for what he has committed and other persons in the same community are warned not to commit similar crimes.

The Penalty for Theft:

The other crime that is specified in the Quran is theft. As we know, Islam emphasises the individual's safety with regard to his life, property, and honour. Any threat to these three entities is severely punished by Islam. A person who kills another or robs him is severely punished because this is the only way to guarantee security for every individual.

Concerning theft, Islam legislates cutting the thief's hand off as a maximum punishment and under certain conditions. In countries that apply this punishment, like Saudi Arabia, we notice that theft is a very rare occurrence. The judge decides the seriousness of the case and decides if the thief should get the maximum penalty or not, according to certain conditions and restrictions.

When a person knows that he will lose his hand if he uses it in stealing, this makes stealing a rare possibility. The implication of such a punishment is this: each organ in the body must be used cleanly, honourably, and legally. The function of the hand is not stealing. If the hand is used to threaten other people, it is a dangerous hand and the judge is entitled to reconsider its existence.

The other implication of cutting the hand off is to give the thief and other people a permanent example and a continuous reminder of the fate of thieves. In countries that merely imprison the thief, the thief himself may steal again after being released from prison.

The Penalty for Adultery:

Another major crime in Islamic law is adultery. The Holy Quran tells us that the adulterer or the adulteress is to be flogged one hundred stripes while being witnessed by some people. The idea of letting some people witness the carrying out of the punishment is to add to the psychological effect of flogging on the culprit. If the adulterer or adulteress is married, the penalty is stoning to death, according to certain strict conditions.

The position of Islam with regard to adultery is clear. If adultery is punished softly or not punished at all, the result will be destructive to the family structure. The family, according to Islam, is the best structure that secures happiness, security, loyalty, and belongingness to the husband, the wife, and children. Therefore, this family must be protected from all dangers and threats. One threat to the family surely comes from adultery. That is why Islam punishes adultery severely in order to penalise offenders and to deter others.

In countries that are lenient with adultery, before and after marriage, the result is obvious for all of us. Those countries have frequent divorces, frequent cases of rape, countless cases of nervous breakdown caused by divorce, murders accompanying rape, and a series of psychological and mental complications.

According to Islam, all physical needs must be organised and all psychological needs must be guaranteed. Eating is a need, but it must be regulated; otherwise, a person may starve or explode out of overeating. The same applies to the sexual need; this need must be satisfied and organised at the same time. The only safe solution is the Islamic one: sexual satisfaction through marriage only. This solution has no single bad side effect. On the contrary, free sex satisfies the sexual need, but it has a countless number of ill-effects that harm the family, adults, and children.

The Penalty for False Accusation of Adultery:

The other major crime is the false accusation of a woman of adultery. The punishment of a false accuser is flogging him eighty stripes and not admitting evidence from him throughout his life.

This severe punishment for a false accusation of adultery is justifiable on the basis that this accusation has a destructive influence on the woman involved. If she is married, she may be divorced in addition to the disgrace that will follow her and her family. If she is not married, this accusation may block the way of marriage in front of her.

Of course, offences are more than five. Those five mentioned here are the major ones. Because murder, robbery, theft, adultery, and false accusation of adultery are the major crimes, the Quran mentions them and specifies the punishment for each. Other crimes and offences are punished according to what the judge sees in the light of the spirit and text of penal laws.

As we can see, Islam is not a system of prayers and fasting only. It is a system that regulates worship, penal laws, marriage and divorce, inheritance, taxes, eating, clothing, and social relations. In brief, Islam is a comprehensive system that regulates all the aspects of human life, guides man to the best solutions to his major problems, and helps man to avoid problems in the first place.

[From: Towards Understanding Islam, By Sayyid Abul A'la Maududi]