The Islamic concept of history 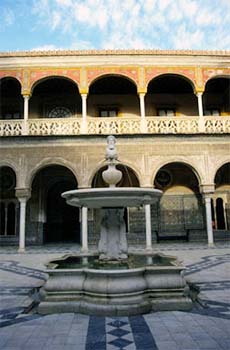 According to the Quran, Allah (God) has created the universe with a certain purpose, and all its parts are strictly under His control, carrying out His divine scheme without the slightest deviation.

Similarly, man too has been created with a certain purpose. Yet man, is completely free to do what he wants, and act upon his own decisions. However, in spite of this freedom, he is watched constantly by Allah, for He does not allow any such deviation over a long period that would nullify the plan of His creation.

The universe made by Allah is so vast that, despite the enormous progress made by human beings in their attempts to fathom the universe, many of its secrets still remain unknown. The planet Earth, made by Allah as part of the cosmos is unique in the entire universe, in that it has been endowed with an atmosphere and all the other factors, which are essential to make it habitable for man.

Aadam was the first man as well as the first Prophet. The way of Allah is to select a man as His Messenger from amongst human beings themselves, in order to send His revelations to humankind. Therefore, Allah revealed to Aadam, may Allah exalt his mention, through an angel the purpose of man's inhabiting the earth. According to this plan, Allah created a creature in the form of man, upon whom He bestowed freedom. Where the rest of the universe had no choice but to submit to the will of Allah, it is desirable for man to opt for this divine plan of his own free will.

This plan of divine will is based on two basic principles:  Monotheism and Justice. Monotheism holds man to worshipping one God alone, and not associating anyone or anything in this worship. Justice holds man to adhering completely to ethical principles in dealing with other human beings, and refraining from all kinds of injustice and oppression.

Along with this, Allah Almighty informed man that, although he appeared to be free, he was fully accountable to Him. Allah has a complete record of man's actions. In the eternal life after death Allah would judge everyone according to this record. The one who exercised his freedom wrongly would be thrown into eternal hellfire.

Aadam, may Allah exalt his mention, died at a ripe old age. For a long period his people continued to adhere faithfully to the divine guidance. However, later, idolatry replaced Monotheism and people began to adopt the ways of injustice and oppression instead of justice and rectitude. After about 1000 years, the perversion became so all pervading that they were completely distanced from the path of the Sharee'ah (Divine Law) as shown by Aadam, may Allah exalt his mention.

The age of perversion

Allah subsequently sent Nooh (Noah), may Allah exalt his mention, as His Messenger. He was granted an exceptionally long life of 950 years, during which he continued to show people the right path, generation after generation. However, only a few people heeded his words. The rest persisted in their sinful ways. Then, in accordance with the ways of Allah, a huge flood engulfed them by way of punishment. Nooh (Noah), may Allah exalt his mention, and his small band of followers were saved in a boat, while all the rest drowned.

At that time, human population was probably concentrated only in the region of Asia known as . The men and women saved in the wake of this flood settled afterwards in other parts of the world. Their race multiplied until it spread over the three continents of Asia, Africa and .

After the death of Nooh (Noah), may Allah exalt his mention, his people continued to adhere to the divine path shown by him, for a considerable period of time. However, again rot set in the later generations and they deviated from the path of Monotheism and justice. Allah's Messengers, may Allah exalt their mention,  -- the Quran has mentioned twenty five by name -- continued to come for several thousand years.

A Hadeeth (saying of Prophet Muhammad,

The reasons for perversion

What were the reasons for this continued transgression? There were two main reasons: political absolutism and ignorance about the world of nature.

In ancient times the system of monarchy prevailed everywhere. The kings of those days had adopted an easy strategy for the consolidation of their empire, and that was to apply a complete curb on intellectual freedom. As a result, Science could not make any progress in the days of old.

The same was the case with religion. The policy adopted by these kings was not to allow their subjects to follow any religion other than that approved of by the king. Superstitious religion served their purpose only too well. Therefore, not only did they themselves embrace superstitious religion, they also compelled their subjects to adhere to it. People were denied the right to think freely and opt for any religion other than the official one.

The other factor was ignorance. In ancient times, man knew too little about the world and its phenomena. Political absolutism had placed an almost total ban on scientific research. Therefore, all kinds of superstitions prevailed regarding natural phenomena. It was generally held that the Sun, Moon and the stars possessed supernatural powers.

Similarly, it was believed that the sea, mountains and other such natural features were endowed with some extraordinary, mysterious power that exercised decisive control over human destiny.

The problem of evil

Those who want to interpret human history in the light of predetermined law, as is done in the physical world, are doomed to failure. While the physical world may be explainable within the framework of pre-determinism, the events of the human world are simply not amenable to interpretation in terms of any such law.

Others want to interpret the events of the human world in the context of freedom, but they are not satisfied either with their interpretation. This is because in spite of human freedom, the suffering experienced in this world has no valid understandable explanation. The failure of both these interpretations is due to the fact that they attempt to explain the whole in the light of a part -- which is simply not possible.

The truth is that the right principle by which to interpret human history is neither that of pre-determinism nor of freedom. According to Islam, there is only one correct principle to interpret human history and that is the principle of test. Man has been placed in the present world for the purpose of being tested. The eternal future of humankind will depend on the outcome of this test.

If everything had been completely predetermined in the world, the element of trial would have been absent. Granting freedom to people did involve the risk of some people misusing their freedom, which gave rise to the problem of human suffering. Suffering results from evil, yet this suffering or evil, is a very small price to pay for a very precious thing. Although, man has a will, the will of Almighty Allah encompasses all wills, so nothing happens in the universe unless Allah ordained for it to happen.

According to Islam that person is most precious who leads his life in this world in such a manner that, despite facing all sorts of temptations, he succeeds in overcoming them. Despite having the power to misuse his freedom, he refrains from doing so. Despite the possibility of leading an unprincipled life, he chooses his own free will to be a man of principle. To identify such individuals, it is essential that an atmosphere of freedom prevail in the world. This is not possible under any other system.