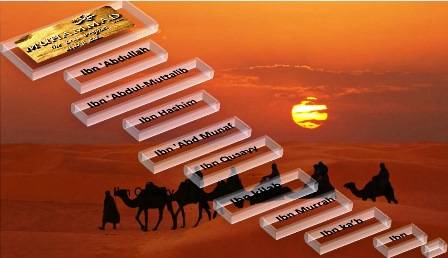 The lineage of Prophet Muhammad

has three versions: The first was authenticated by biographers and genealogists and states that Prophet Muhammad's

genealogy has been traced to Adnan. The second is subject to controversies and doubt. It traces his lineage beyond Adnan back to prophet Ibraheem (Abraham)

. The third version, which definitely has some inaccuracies, traces his lineage beyond Ibraheem back to Adam (Adam)

.
The prophetic family:
The family of Prophet Muhammad

is called the Hashimite family after his grandfather Hashim Ibn 'Abd Munaf. Let us now speak a little about Hashim and his descendants:
1-    Hashim: He was the one responsible for giving food and water to the pilgrims. This had been his charge when the sons of 'Abd Munaf and those of 'Abd Ad-Dar compromised on dividing the charges between them. Hashim was wealthy and honest. He was the first to offer the pilgrims sopped bread in broth. His first name was 'Amr but he was called Hashim because he had been in the practice of crumbling bread (for the pilgrims).
He was also the first man who started Quraysh's two journeys of summer and winter. It was reported that he went to Syria as a merchant. In Al-Madeenah, he married Salmah, the daughter of 'Amr from Bani 'Adi Ibn An-Najjar. He spent some time with her in Al-Madeenah then he left for Syria again while she was pregnant. He died in Ghazza in Palestine in 497 CE. Later, his wife gave birth to 'Abdul-Muttalib and named him Shaybah because of the white hair on his head, and brought him up in her father's house in Al-Madeenah. None of his family in Makkah learned of his birth. Hashim had four sons: Asad, Abu Saifi, Nadla and 'Abdul-Muttalib, and five daughters Ash-Shifa, Khalida, Da'ifa, Ruqyah and Jannah.
2-    'Abdul-Muttalib: After the death of Hashim, the charge of the pilgrims' food and water went to his brother, Al-Muttalib Ibn 'Abd Munaf (who was honest, generous and trustworthy). When 'Abdul-Muttalib reached the age of boyhood, his uncle Al-Muttalib heard of him and went to Al-Madeenah to fetch him. When he saw him, tears filled his eyes and rolled down his cheeks, he embraced him and took him on his camel. The boy, however, abstained from going with him to Makkah until he took his mother's consent. Al-Muttalib asked her to send the boy with him to Makkah, but she refused. He managed to convince her saying: "Your son is going to Makkah to restore his father's authority, and to live in the vicinity of the Sacred House."
There in Makkah, people wondered at seeing ‘Abdul-Muttalib, and they considered him the slave of Al-Muttalib. Al-Muttalib said: "He is my nephew, the son of my brother Hashim." The boy was brought up in Al-Muttalib's house, but later on Al-Muttalib died in Bardman in Yemen, so 'Abdul-Muttalib took over and managed to maintain his people's prestige and exceeded his grandfather in his honorable behavior, which earned him deep love and high esteem from the people of Makkah.
3-    When Al-Muttalib died, Nawfal usurped 'Abdul-Muttalib’s charges, so the latter asked for help from the Quraysh, but they abstained from extending any sort of support to either of them. Consequently, he wrote to his uncles of Bani An-Najjar (his mother's brothers) to come to his aid. His uncle, Abu Sa’d Ibn 'Adyy (his mother's brother) marched to Makkah at the head of eighty horsemen and camped in Abtah in Makkah. 'Abdul-Muttalib received the men and invited them to go to his house but Abu Sa’d said: "Not before I meet Nawfal." He found Nawfal sitting with some old men of Quraysh in the shade of Al-Ka'bah. Abu Sa’d drew his sword and said: "I swear by Allah that if you don't restore to my nephew what you have taken, I will kill you with this sword." Nawfal was thus forced to give up what he had usurped, and the notables of Quraysh were made to witness to his words.
Abu Sa’d then went to 'Abdul-Muttalib's house where he stayed for three nights, made 'Umrah (minor pilgrimage) and left back for Al-Madeenah. Later on, Nawfal entered into alliance with Bani 'Abd Shams Ibn 'Abd Munaf against Bani Hashim. When Khuza'a, a tribe, saw Bani An-Najjar's support to 'Abdul-Muttalib they said: "He is our son as he is yours. We have more reasons to support him than you." 'Abd Munaf's mother was one of them. They went into An-Nadwa House (a place they used to gather in to discuss serious matters) and entered into alliance with Bani Hashim against Bani 'Abd Shams and Nawfal. It was an alliance that was later to constitute the main reason for the conquest of Makkah. 'Abdul-Muttalib witnessed two important events in his lifetime, namely digging the Zamzam well and the Elephant raid.
Digging the Well of Zamzam
The well of Zamzam originated for the sake of Isma’eel

when he and his mother Hajar (Hagar) were overtaken by thirst, Allah the Almighty caused a stream of water to flow in the empty desert. Hajar contained the flowing water by building a mound around it and it turned into a well. At the time of leaving Makkah, the Jurhum tribe covered it with dust and so, for a long time it could not be traced. When the task of giving water to the pilgrims was entrusted to ‘Abdul-Muttalib, he started searching for it along with his elder son Harith, but their efforts proved fruitless.
One day, ‘Abdul-Muttalib saw the location of the well of Zamzam in his dream and started digging for it. There were two idols, ‘Isaf and Na’ilah kept at that spot. The Quraysh resented this disturbance and became hostile and ready to fight. Although they were only two, father and son, they prevailed over them and continued digging the well. Realizing his isolation, ‘Abdul-Muttalib invoked Allah the Almighty that in case He gave him ten sons, he would sacrifice one of his sons in the name of God. After a short period, the well appeared and he was also blessed with ten sons.