The moral system in Islam 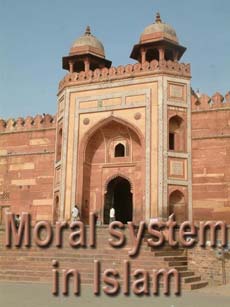 Islam has laid down universal fundamental rights for humanity that are to be observed and respected under all circumstances. In order to realise these rights in one's everyday social life, Islam provides both legal safeguards and a very effective moral system. In brief, whatever improves the well-being of an individual or a society is morally good, and whatever harms this well-being is morally bad.

Islam attaches great importance to the love of God and fellow human beings, and discourages excessive formalism. We read in the Quran (what means): “It is not righteousness that you turn your faces towards East or West, but [true] righteousness is [in] one who believes in Allah, the Last Day, the Angels, the Book, and the prophets and gives wealth, in spite of love for it, to relatives, orphans, the needy, the traveller, those who ask [for help], and for freeing slaves; [and who] establishes prayer and gives Zakah; [those who] fulfil their promise when they promise; and [those who] are patient in poverty and hardship and during battle. Those are the ones who have been true, and it is those who are the righteous.” [Quran: 2:177]

These verses give a beautiful description of the righteous and religiously committed individual. He should obey salutary regulations but fix his gaze on the love of God and the love of humanity. An individual's faith should be true and sincere and he must be prepared to show it in deeds of charity to other people and by living as a good citizen and supporter of social organisations. Finally, individual faith must remain firm and unshaken in all circumstances.

This is the standard by which a particular mode of conduct can be classified as either good or bad. It also provides the nucleus around which an individual's and society’s moral code should revolve. Before laying down any moral injunctions, Islam seeks to implant firmly in man's heart the conviction that his dealings are with God, Who sees him at all times and in all places. While he may hide himself from others or deceive them, he cannot do so with God.

Islam teaches that the objective of one's life is to live a life that is pleasing to God. To make such a goal possible, Islam has provided humankind with the highest possible standard of morality. This moral code, which is both straightforward and practical, provides the individual with innumerable ways to embark upon and then continue the path of moral evolution. By making Divine Revelation the primary source of knowledge, moral standards are made permanent and stable. However, this does not make them inflexible, for there is room for reasonable adjustment and adaptation when needed. The danger of moral relativism, now so widespread in many societies, is thereby avoided.

Another benefit is the gradual internalisation of these moral standards, for one seeks to obey them voluntarily to please God, not because some government or people tell him to do so. An individual's belief in God, when added to his belief in the Day of Judgement, is a powerful motivating factor to live a highly moral life.

Islam does not seek to minimise the importance of traditional and

commonly accepted moral norms or give exaggerated importance to some and neglect others.

The Islamic moral code incorporates all the commonly accepted moral virtues and then endows them with a sense of balance and proportion, by assigning each one a suitable place and function in the scheme of life. It widens the scope of man's individual and collective life by dealing with his domestic associations, civic conduct, and his activities in the political, economic, legal, educational and social realms. It covers his life from the home to the society, from the dining table to the battlefield and peace conferences. In short, from the cradle to the grave - for no sphere of life is exempt from the universal and comprehensive application of the moral principles of Islam. It makes morality reign supreme and ensures that the affairs of life are regulated by moral norms, and not dominated by selfish desires and petty interests.

A major goal of Islam is to provide humankind with a practical and realistic system of life by which he can conduct his life. It calls upon humankind not only to practice virtue, but also to establish it and to eradicate all that is harmful. It seeks the supremacy of the conscience in all matters so that what is harmful cannot gain the upper hand either in an individual's life or in society. Those who respond to this call are known as Muslims, which literally means those who have submitted to God. The sole object of the resulting community of Muslims or Ummah is undertaking an organised effort to establish what is good and to fight and eradicate what is evil and harmful.

Some of Islam's basic moral teachings are given below. They cover the broad spectrum of a Muslim's personal moral conduct as well as his social responsibilities.

The Quran mentions God-consciousness as the highest quality of a Muslim, saying (what means): “…The most noble of you in the sight of Allah is the most righteous of you…” [Quran: 49:13]

Humility, modesty, control of passions and desires, truthfulness, integrity, patience, steadfastness and fulfilling one's promises - all these moral values are mentioned many times in the Quran, such as (what means): “And God loves those who are firm and steadfast.” [Quran: 3:146]

The Quran also tells Muslims (what means): “And hasten to forgiveness from your Lord and a garden [i.e., ] as wide as the heavens and the earth, prepared for the righteous. Who spend [in the cause of Allah] during ease and hardship and who restrain anger and who pardon the people – and Allah loves the doers of good.” [Quran: 3:133-134] And:  “…Establish prayer, enjoin what is right, forbid what is wrong, and be patient over what befalls you. Indeed, [all] that is of the matters [requiring] determination. And do not turn your cheek [in contempt] toward people [Rather, respect them by directing your face and attention to them.] And do not walk through the earth exultantly. Indeed, Allah does not like everyone self-deluded and boastful. And be moderate in your pace and lower your voice; indeed, the most disagreeable of sounds is the voice of donkeys.”  [Quran: 31:17-19]

The following statement of the Prophet

summarises the moral behaviour of a committed Muslim: “My Sustainer has given me nine commands: to remain conscious of God in private and in public; to speak justly whether angry or pleased; to show moderation when poor or rich; to rekindle friendship with those who have broken it off with me; to give to him who refuses me; that my silence should be occupied with thought; that my looking should be an admonition; and that I should command what is right.”

The teachings of Islam regarding social responsibilities are based on kindness and consideration for others. Islam stresses specific acts of kindness and defines the responsibilities and rights that belong to various relationships. Our first obligation is to our immediate family - parents, spouse and children, then to other relatives, neighbours, friends and acquaintances, orphans and widows, the needy of the community, our fellow Muslims, our fellow human beings and animals.

Respect and care for parents is a very important part of a Muslim's expression of faith. The Quran says (what means): “And your Lord has decreed that you not worship except Him, and to parents, good treatment. Whether one or both of them reach old age [while] with you, say not to them [so much as], 'uff' and do not repel them but speak to them a noble word. And lower to them the wing of humility out of mercy and say: 'My Lord! Have mercy upon them as they brought me up [when I was] small.'” [Quran: 17:23-24]

The Quran says (what means): “And give the relative his right, and [also] the poor and the traveller, and do not spend wastefully.” [Quran: 17:26]

said: "He is not a believer who eats his fill while his neighbour is hungry" and: "He does not believe whose neighbours are not safe from his injurious conduct."

), a Muslim has to discharge his moral responsibility not only to his parents, relatives, and neighbours but also to all humankind, animals, and useful trees and plants. For example, hunting birds and animals for sport is not permitted. Similarly, cutting down trees and plants that yield fruit is forbidden unless there is a very pressing need for one to do so.

Thus, on the basic moral plane, Islam provides humankind with a higher system of morality that can be used by an individual to realise his greatest potential. Islam purifies the soul of self-seeking egotism, tyranny, wantonness, and lack of discipline. It creates God-fearing men who are devoted to their ideals, motivated by piety, abstinence and discipline, who do not make any compromise with falsehood. It creates moral responsibility and fosters the capacity for self-control. Islam generates kindness, generosity, mercy, sympathy, peace, selfless goodwill, scrupulous fairness, and truthfulness towards all creatures in all situations. It nourishes noble qualities from which only good may be expected.