The 'sword' of Islam 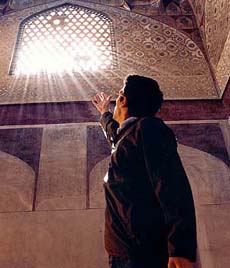 Among the ones who later joined this faith in Makkah were the honest merchant, Abu Bakr; the iron man of ’Umar; the shy businessman, ‘Uthmaan; the Prophet's brave uncle Hamzah; and the slave of a pagan family, Bilaal, may Allah be pleased with them. They simply could not resist the alleged ‘magic sword’ of a humble and lonely prophet! The negligible minority of the believers in the new faith were soon driven away from Makkah.

In the city of their migration, Al-Madeenah, people not only welcomed the Muslims, but the ‘sword’ with which it is alleged that people converted to Islam, as well. It did not cease to work even there and its magnetic force continued to "pull" people towards it until the whole of joined the faith. Compared to the population of the rest of the world, at that time, the Arabs constituted a tiny minority. A fraction of this minority decided to take the sword beyond the boundaries of the Arabian desert to the mighty empires of Rome and Persia, the shores of the Mediterranean, the coast of Malabar and the far away East Indies Islands. All these people ostensibly went on surrendering to this ‘sword’ and joining the faith.

So sharp was the edge of the ‘sword’! It simply conquered the hearts, the bodies yielded automatically.

What is this ‘sword’ by which Islam spread?

It is the sword of truth, whose shine eliminates falsehood just like light wipes away darkness.

Has the sword gone blunt?

It continues to pierce the heart of countless men and women even today -- in spite of the relentless efforts by people with vested interests, who would like darkness to prevail, instead of the light of Islam.

Given below are the impressions of some people who were recently conquered by the same sword. They are from different countries, speak different languages and have different backgrounds. Their present addresses are also given. Perhaps you may like to ask them how it feels to be struck by the sword of truth.

Austrian statesman, journalist and author; former foreign correspondent for the Frankfurter Zeitung; author of Islam at Cross Roads and Road to Makkah and translator of the Quran. (Embraced Islam in 1926).

"Islam appears to me like a perfect work of architecture. All its parts are harmoniously conceived to complement and support each other. Nothing is superfluous and nothing lacking, with the result of an absolute balance and solid composure."

Traveled extensively in search of the Divine truth. Spent much time in search and comparative study of Judaism, Christianity and Islam.

Originally Polish, now American. Ph.D. in History and Politics. Had a very interesting journey to Islam and faced severe hardship; was imprisoned twice by the Polish Communist regime (1968, 1981-82).

"When I was 12 years old I rejected the illogical and contradictory faith of the Church. Two years later in 1962, I was fascinated by the victorious struggle of the Algerian Muslim Mujaahideen against French colonialism. It was the first ' arrow' of Islam... in high school and the earliest days of my education in the university, I was a typical example of the 'rebel generation' of reds...My way to the truth of al-Quran was slow and unpaved...in 1974 I visited Turkey, I wrote my M.A. dissertation about Sultan and Caliph Suleiman Kanuni’s policy towards Polish Kingdom. There, I was hit by the most beautiful voice of mankind: Athaan, the call to prayer. My hair stood up. An unknown powerful force led me to an old masjid in . There, old smiling Turkish, bearded men taught me wudhoo, (ablution), I confessed to tears the shahaadah (testimonies of faith) and I prayed my first salah (prayer) at Maghrib...I swept out the rubbish ideologies ...for the first time in my life, my mind was relaxed and I felt the pleasure of Allah's love in my heart, I was a Muslim...”.

"In Islam I found suitable replies to nagging queries arising in my mind with regard to the theory of creation, status of women, creation of the universe etc. The life history of the Holy Prophet

attracted me very much and made easy for me to compare with other world leaders and their philosophies."

German diplomat, missionary and social worker. An intellectual, who has been serving the German Diplomatic Mission in various parts of the world. Presently working as Cultural attache in German Embassy in .

"I have lived under different systems of life and have had the opportunity of studying various ideologies, but have come to the conclusion that none is as perfect as Islam. None of the systems has got a complete code of a noble life. Only Islam has it; and that is why good men embrace it. Islam is not theoretical; it is practical. It means complete submission to the will of God.'

"It will be wrong to judge Islam in the light of the behavior of some bad Muslims who are always shown on the media. It is like judging a car as a bad one if the driver of the car is drunk.”
Present address: Chairman, Muslim Aid, N7.

American, formerly Jewish. Essayist and journalist. Author of many books.

"The authority of Islamic morals and laws proceeds from Almighty God. Pleasure and happiness in Islam are but the natural by products of emotional satisfaction in one's duties conscientiously performed for the pleasure of God to achieve salvation. In Islam duties are always stressed above rights. Only in Islam was my quest for absolute values satisfied. Only in Islam did I at last find all that was true, good, beautiful and which gives meaning and directions to human life and death."

"For some time now, striving for more and more precision and brevity, I have tried to put on paper, in a systemic way, all philosophical truths, which, in my view, can be ascertained beyond reasonable doubt. In the course of  this effort it dawned on me that the typical attitude of an agnostic is not an intelligent one; that man simply cannot escape a decision to believe; that the createdness of what exists around us is obvious; that Islam undoubtedly finds itself in the greatest harmony with overall reality. Thus I realize, not without shock, that step by step, in spite of myself and almost unconsciously, in feelings and thinking I have grown into a Muslim. Only one last step remained to be taken; to formalize my conversation. As of today I am a Muslim. I have arrived."

Present address: Embassy of the Federal Republic of Germany, BP 664, .

"I have had nice moments in my life. But the feeling I had while standing on Mount ‘Arafaat on the day of 'Hajj' (pilgrimage), was the most unique. I felt exalted by the indescribable spiritual atmosphere there, as over a million and a half pilgrims invoked God to forgive them of their sins and bestow on them His choicest blessings. It was an exhilarating experience to see people belonging to different colors, races and nationalities, kings, heads of states and ordinary men from very poor countries all clad in two simple white sheets praying to God without any sense of either pride or inferiority. It was a practical manifestation of the concept of equality in Islam."

These were the impressions of a few persons who had been struck by the sword of truth themselves.

As for the propaganda that it was the sword of steel (i.e. the force ) which was instrumental in the universal expansion of Islam, we give below remarks of some prominent non-Muslims refuting this baseless claim:

".......I become more than ever convinced that it was not the sword that won a place for Islam in those days in the scheme of life. It was the rigid simplicity, the utter self-effacement of the Prophet, the scrupulous regard for his pledges, his intrepidity, his fearlessness, his absolute trust in God and his own mission. These, and not the sword carried everything before them and surmounted every trouble."

"The greatest success of Mohammed's life was effected by sheer moral force without the stroke of a sword."

"The picture of the Muslim soldier advancing with a sword in one hand and the Quran in the other quite false."

" History makes it clear however, that the legend of fanatical Muslims, sweeping through the world and forcing Islam at the point of sword upon conquered races is one of the most fantastically absurd myths that historians have ever repeated."

"My problem to write this monograph is easier because we are not generally fed now on that (distorted) kind of history and much time need not to be spent on pointing out our misrepresentations of Islam. The theory of Islam and sword, for instance, is not heard now in any quarter worth its name. The principle of Islam that: ' there is no compulsion in religion' is well known".

"No other religion in history spread so rapidly as Islam...The West has widely believed that this surge of religion was made possible by the sword. But no modern scholar accepts that idea, and the Quran is explicit in support of the freedom of conscience".

"Incidentally these well-established facts dispose off the ideas so widely fostered in Christian writings that wherever the Muslims went, they forced people to accept Islam at the point of the sword."