The water cycle and the seas in the Quran 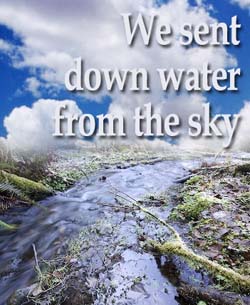 When the verses of the Quran concerning the role of water in man’s existence are read in succession today, they appear to express ideas that are obvious. The reason for this is simple: in our day and age, we all know about the water cycle in nature to a greater or lesser extent.

However, if we consider the various ancient concepts on this subject, it becomes clear that the data in the Quran does not embody the mythical concepts prevalent at the time of Revelation, that had developed more according to philosophical speculation than observed phenomena. Although it was empirically possible to acquire the useful practical knowledge necessary to improve irrigation, the concepts held on the water cycle in general would hardly be acceptable today.

Thus, it would have been easy to imagine that underground water could have come from the infiltration of precipitation in the soil. In ancient times however, this idea, held by Virtuvius Polio Marcus in 1st century CE, was cited as an exception. Thereafter, for many centuries (and the Quranic Revelation occurred during this period) man held completely inaccurate views on the water cycle.

Two specialists on this subject, G. Gastany and B. Blavoux, in their entry in the Encyclopedia Universalis under the heading ‘Hydrogeology’, give an edifying history of this problem.

“In the 7th century CE, Thales of Miletus held the theory whereby the waters of the oceans, under the effect of winds, were thrust towards the interior of the continents; so the water fell upon the earth and penetrated into the soil. Plato shared these views and thought that the return of the waters to the oceans was via a great abyss, the ‘Tartarus’. Until the 18th century CE, this theory had many supporters, one of whom was Descartes. Aristotle imagined that the water vapour from the soil condensed in cool mountain caverns and formed underground lakes that fed springs. He was followed by Seneca (1st century CE) and many others, until 1877 CE, among them O. Volger …”

The first clear formulation of the water cycle must be attributed to Bernard Palissy in 1580 CE. He claimed that underground water came from rainwater infiltrating into the soil. This theory was confirmed by E. Mariotte and P. Perrault in the 17th century CE.

In the following passages from the Quran, there is no trace of the mistaken ideas that were current at the time of Prophet Muhammad

(may Allah exalt his mention).

The Quran says (what means): “We sent down water from the sky, blessed water whereby We caused to grow gardens, grains for harvest, tall palm-trees with their spathes, piled one above the other – sustenance for (Our) servants. Therewith We gave (new) life to a dead land. So will be the emergence (from the tombs).” [Quran 50:9-11]

And (what means): “We sent down water from the sky in measure and lodged it  in the ground. And We certainly are able to withdraw it. Therewith for you We gave rise to gardens of palm-trees and vineyards where for you are abundant fruits and of them you eat.” [Quran 23: 18-19]

And (what means): “We sent forth the winds that fecundate. We cause the water to descend from the sky. We provide you with the water – you (could) not be the guardians of its reserves.” [Quran 15:22]

There are two possible interpretations of this last verse. The fecundating winds may be taken to be the fertilizers of plants because they carry pollen. However, this may be a figurative expression referring by analogy to the role the wind plays in the process, whereby a non-raincarrying cloud is turned into one that produces a shower of rain.

The Quran says (what means): “Allah is the One Who sends forth the winds which raised up the clouds. He spreads them in the sky as He wills and breaks them into fragments. Then thou seest raindrops issuing from within them. He makes them reach such of His servants as He wills. And they are rejoicing.” [Quran 30:48]

And  (what means): “(Allah) is the One Who sends forth the winds like heralds of His Mercy. When they have carried the heavy-laden clouds, We drive them to a dead land. Then We cause water to descend and thereby bring forth fruits of every kind. Thus We will bring forth the dead. Maybe you will remember.” [Quran 7:57]

And (what means): “Hast thou not seen that Allah sent water down from the sky and led it through sources into the ground? Then He caused sown fields of different colors to grow.”  [Quran 39:21]

And (what means): “Therein We placed gardens of palm-trees and vineyards and We caused water springs to gush forth.” [Quran 36:34]

The importance of springs and the way they are fed by rainwater conducted into them is stressed in the last three verses. It is worth pausing to examine this fact and call to mind the predominance in the Middle Ages of views such as those held by Aristotle, according to whom springs were fed by underground lakes. In his entry on Hydrology in the Encyclopedia Universalis, M.R. Remenieras, a teacher at the French National School of Agronomy (Ecole nationale du Genie rural, des Eaux et Forets), describes the main stages of hydrology and refers to the magnificent irrigation works of the ancients, particularly in the Middle East. However, he notes that an empirical outlook ruled over everything, since the ideas of the time proceeded from mistaken concepts. He continues as follows:

“It was not until the Renaissance (between circa 1400 and 1600 CE) that purely philosophical concepts gave way to research based on the objective observation of hydrologic phenomena. Leonardo da Vinci (1452-1519 CE) rebelled against Aristotle’s statements. Bernard Palissy, in his Wonderful Discourse on the Nature of Waters and Fountains both Natural and Artificial (Discours admirable de la nature des eaux et fontaines tant naturelles qu’artificielles; Paris, 1570) gives a correct interpretation of the water cycle and especially of the way springs are fed by rainwater.”

This last statement is surely exactly what is mentioned in the Quran (chapter 39, verse 21) describing the way rainwater is conducted into sources in the ground.

“Hast thou not seen that God makes the clouds move gently, then joins them together, then makes them a heap. And thou seest raindrops issuing from within it. He sends down from the sky mountains of hail, He strikes therewith whom He wills and He turns it away from whom He wills. The flashing of its lightning almost snatches away the sight.”

“Have you observed the water you drink? Do you bring it down from the rainclouds? Or do We? If it were Our will, We could make it salty. Then why are you not thankful?” [Quran 56: 68-70]

This reference to the fact that God could have made fresh water salty is a way of expressing Divine Omnipotence. Another means of reminding us of the same Omnipotence is the challenge to man to make rainfall from the clouds. In modern times however, technology has surely made it possible to create rain artificially. Can one therefore oppose the statement in the Quran to man’s ability to produce precipitations?

The answer is no, because it seems clear that one must take account of man’s limitations in this field. M.A. Facy, an expert at the French Meteorological Office, wrote the following in the Encyclopedia Universalis under the heading Precipitations: “It will never be possible to make rain fall from a cloud that does not have the suitable characteristics of a raincloud or one that has not yet reached the appropriate stage of evolution (maturity).” Therefore, man can never hasten the precipitation process by technical means, when the natural conditions for it are not present. If this were not the case, droughts would never occur in practice – which they obviously do. Thus, to have control over rain and fine weather still remains a dream.

Man cannot willfully break the established cycle that maintains the circulation of water in nature. This cycle may be outlined as follows, according to modern ideas on hydrology:

The heat from the sun’s rays causes the water from the sea and other water surfaces on Earth to evaporate. The water vapour that is given off rises into the atmosphere and, by condensation, forms clouds. The winds then intervene and move the clouds thus formed over varying distances. The clouds can then either disperse without producing rain, or combine their mass with others to create even greater condensation, or they can fragment and produce rain at some stages in their evolution. When rain reaches the sea (70 percent  of the Earth’s surface is covered by water), the cycle is soon repeated. When rain falls on the land, it may be absorbed by vegetation aid its growth; the vegetation in its turn gives off water and thus returns some water to the atmosphere. The rest, to a lesser or greater extent, infiltrates into the soil, from where it is either conducted through channels into the sea, or comes back to the Earth’s surface network through springs or resurgences.

When one compares the modern data of hydrology to what is contained in the numerous verses of the Quran quoted in this paragraph, one has to admit that there is a remarkable degree of agreement between them.

Summarized from: The Bible, the Quran and Science 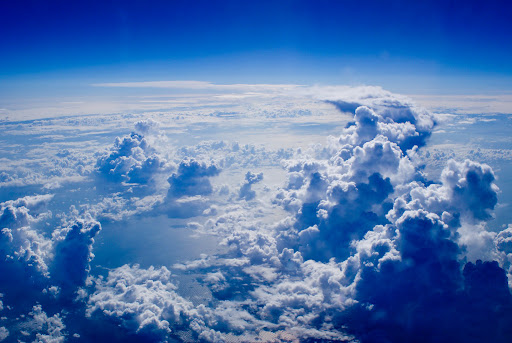 In the Qur'an, Allah Almighty calls our attention to a very important attribute of the sky: "We made the sky a preserved and protected roof, yet still they turn away from Our signs."...More