The caliphate of 'Uthmaan -I 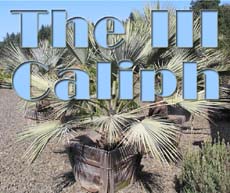 was somewhere outside Al-Madeenah. 'Umar

said addressing those five persons: "Keep waiting for Talhah for three days: If he returns within this period, he is included in the panel otherwise you should choose your Caliph from among yourselves."

After the demise of 'Umar

as acting Caliph and Imam for three days as per the will left by 'Umar. Afterwards, they contacted 'Ali, 'Uthmaan, Az-Zubayr, Sa’ad, ’Abdur-Rahman bin 'Awf and 'Abdullah bin 'Umar, and assembled them in the house of Miswar bin Makhramah, or according to other accounts, in the house of 'Aa’ishah

was still out of Al-Madeenah. When all the members arrived, ’Abdur-Rahman bin 'Awf

got up and said: "Who among those nominated for the Caliphate withdraws his name so that he may be given power to appoint the most excellent and suitable among you as Caliph?" All the persons present kept silent. After a while he announced: "I give up my candidacy and I am ready to perform the duty of appointing a Caliph." All of them agreed to it and empowered him to appoint the Caliph. However, 'Ali

kept silent. When ’Abdur-Rahman asked him about his silence, he said: "I agree with the opinion of other members, but, you must first promise to make your decision without any favor and personal involvement and do it with an eye on the truth and for the welfare of the whole Ummah."

said: "I give my word that I will do it without showing any favor to anyone and without any personal involvement just for the sake of truth and for the welfare of the Ummah. But all of you should also promise to agree to the one I choose for the post, and you will rise against the one who disagrees with me." Having heard this, 'Ali

and all those present said with one voice: "We will all lend support to your choice and help you in its enforcement."

With this promise on both sides, the session was over and the members went home and waited for three days for the final verdict. During this period, ’Abdur-Rahman bin 'Awf

kept meeting men of sound judgment and discussing the issue with them. He says that when he said to 'Uthman

when he was alone, and he took the name of 'Uthman. ’Abdur-Rahman then asked Az-Zubayr

to give his decision, he said: "Pledge your allegiance to either 'Uthman or 'Ali." He then referred the issue to Sa’ad

in private, he took the name of 'Uthman. When he took the advice of other men of sound judgment, the majority appeared to be in favor of 'Uthman

On the night before the day of announcing the decision, the members of the panel again assembled in the same house. ’Abdur-Rahmaan bin 'Awf called Az-Zubayr and Sa’ad

separately and said: "Most of the people appear to be in favor of 'Uthman and 'Ali." They too favored them. ’Abdur-Rahman then talked to 'Uthman and 'Ali separately. The night ended and after the Fajr prayer the mosque was crowded with people, all of them were eagerly awaiting the announcement of ’Abdur-Rahman bin 'Awf.

got up and said addressing the audience: "I did all within my power to know the opinion of all the groups and classes of people and nobody is now to go against my decision. All the members of the consultative body and nominated panel have already conceded to my decision and I have spent all my power to arrive at this decision." Saying this he called 'Uthman and asked him to declare his resolve to follow the path shown by Allah and His Messenger,

, and the Righteous Caliphs that passed away before him. 'Uthman

, and follow the examples of Abu Bakr As-Siddeeq and 'Umar

. Following this, ’Abdur-Rahman bin 'Awf himself first pledged his allegiance to 'Uthman and others followed suit.

At the end of the Bay'ah (pledge of allegiance) session, 'Uthman bin 'Affan

came to the pulpit and addressing the congregation asked them to follow the good deeds. He also asked them to fear the evil effects of abundant wealth and stressed keeping the Pleasure of Allah in view. After his preliminary address, he issued an order in the name of the governors and officers mentioning the demise of 'Umar

and his own election as the Caliph of Islam. All of them were enjoined to work with honesty and in good faith.

Other than the conquest of (Iskandariyah), during the first year of the Caliphate of 'Uthman bin 'Affan

there was no other major event. Heraclius had taken refuge in Constantinople () after his flight from Asia Minor and following the fall of Bayt-ul-Maqdis (). Now he was worried about the safety of the rest of his territory, after losing all hope of restoring the lost lands. In the wake of the invasion of Egypt by 'Amr bin Al-'Aas, Muqawqis, the king of Egypt had yielded Egypt and Alexandria to him after earning peace by paying the Jizyah (Head-tax imposed by Islam on the people of the Book). Heraclius considered his own province and Muqawqis his subordinate. Shock and terror engulfed him on all sides and he died surrounded by defeat and dejection during the Caliphate of 'Umar

. His son Qustuntin (Constantine) succeeded him and lost no time in mobilizing a huge army to restore . However, Muqawqis prevented the Romans from entering and thus kept his promise.

When the Muslims came to know of the Roman invasion, they came quickly from Fustat (). The Romans then turned their attack to the Islamic cantonments giving up their campaign for . Both the armies came upon each other and a severe battle broke out. The commander of the Roman army was killed and a large number of Roman soldiers met the same fate. The rest barely reached by boat. 'Amr bin Al-'Aas

lost no time in demolishing the ramparts around and then came back to his cantonment in Fustat. This was done to prevent the possibility of any Roman attack in future trying to turn into a fortress. This event took place in 25 AH.

The Roman invasion of was, in fact, the result of the demise of 'Umar and the same event led to the uprising in the Persian territories of and Rey. They declared their freedom from Muslim rule. 'Uthman bin 'Affan dispatched Abu Moosa Al-Ash'ari, Al-Baraa' bin 'Azib and Qarazah bin Ka'b

to tackle the situation and they did their job well.

the governor of had sent Habeeb bin Maslamah

to . He conquered a number of cities and forts and forced the Romans to pay the Jizyah. When this news reached the Caesar of Constantinople, he collected 80,000 troops from Malit, Siwas, and Quniah and invaded Habeeb bin Maslamah. Habeeb sent the account of these events to Mu'awiyah and he gave the news to the Caliph 'Uthman bin 'Affan. The Caliph wrote to Waleed bin 'Uqbah, the governor of Koofah to dispatch 10,000 reinforcements to who immediately carried out the order with a dispatch of 8,000 troops headed by Salman bin Rabee'ah to .

jointly won and reached up to the . When Habeeb bin Maslamah returned to , Mu’awiyah himself invaded the Roman territory. The Roman fighters escaped leaving Antakiyah () and their citadels behind. This event took place in 25 AH.

Events and changes in

and transferred the entire control of and to 'Abdullah bin Sa’ad.

and the resulting uprisings in , he mobilized a huge army towards under the command of a seasoned general. The Greeks in the city joined the Roman army’s camp and fell to the Romans after slight resistance.

was again sent to Egypt as a governor who launched such a fierce attack at the Romans that they had to flee from Alexandria after sustaining heavy losses and a heavy toll on their soldiers.

Nevertheless, when peace and normalcy returned to the region and the administration was running smooth, 'Amr bin Al-'Aas was deposed once again and replaced by 'Abdullah bin Sa’ad. This time the Caliph’s decision made 'Abdullah bin Sa’ad feel uneasy and uncomfortable, because his efforts to uphold the deteriorating situation of the region the last time had met with utter failure. However, he was now anxious to make amends for his past failures.

The caliphate of 'Uthmaan -II

The caliphate of 'Uthmaan -III