The caliphate of 'Uthman -III 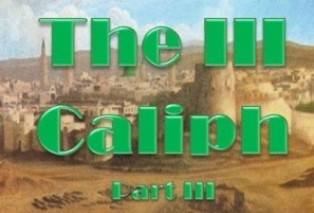 ‘Abdullah bin Saba`, known as Ibn Sauda' was a Jew from San'aa (). He announced his acceptance of Islam during the Caliphate of 'Uthman bin 'Affan

with the intention of taking advantage of the progress and prosperity of the Muslims. He settled in Al-Madeenah to go deep into the internal affairs and weaknesses of the Muslims to take advantage thereof. He set out from Al-Madeenah, reached Basrah and stayed with Hakim bin Jabalah, a man from Basrah who used to commit highway robbery with a band of criminals. There he established close and cordial relations with Hakim bin Jabalah and his friends. Afterwards, he set himself to creating doubts and mischievous thoughts in the minds of the people around him, after cleverly presenting himself as a well-wisher of Muslims and the family of the Prophet,

. After gaining the confidence of many Muslims, he began to carry out his nefarious plan. He first raised the question that if ‘Eesa (Jesus)

could come back to this world, why not Muhammad,

In order to fortify his plea, he began to misinterpret the meaning of the verse (which means): "Verily, He Who imposed upon you the Quran will take you back to a place of return.” [Quran 28:85]

He proposed thereby that the last Prophet,

must come back to this world. Following this, he began to bring the people round to another point that every Prophet had a Caliph (successor) and executor, and that of Muhammad,

. Encouraged by the favorable response from gullible Muslims, he came out to openly propagate his evil intentions of removing the Caliph and replacing him by 'Ali

‘Abdullah bin left Basrah and came to another military base at Koofah after issuing secret instructions to his followers. In Koofah he found a section already working against the office of the Caliphate and its governor. Thus, ‘Abdullaah bin found this land more fertile and the atmosphere more favorable and encouraging for his evil plans.

on the other. He was, therefore, restless to take his revenge on the Caliph. In Koofah, he first established himself as a pious and God-fearing man and was very soon held in high esteem. When ‘Abdullah's mischievous activities came to the notice of the governor, Sa'eed bin Al-'Aas

he called him and took him to task. As a result, ‘Abdullah bin became suspect in everyone’s eyes. Finding the atmosphere unfavorable, he left Koofah and went to .

Like Basrah he left behind a strong lobby in Koofah who were ready to carry on his dirty business. Malik Al-Ashtar and his friends and relatives were the main figures to lend support to his plan. At , in , his nefarious plans could not make any headway and he had to leave the city after being there only a short time. His next target was where he moved very cautiously in the light of his past experiences. He showed love for the Prophet's family and support of 'Ali

the main plank of his propaganda. In order to expedite his plan in an organized way he set up a secret society. He easily gained ground in because the Egyptians and the Arabs living there already had complaints against ‘Abdullah bin Sa’d, the governor of . ‘Abdullah bin Sa’d was too preoccupied with the problems created by the African Berbers and the Caesar of Constantinople to pay attention to these internal affairs.

‘Abdullah bin communicated with his friends in Basrah and Koofah by letters, his group instituted a letter writing campaign with the result that letters containing complaints were constantly being sent against the governors to the people of Al-Madeenah from , Koofah and Basrah with charges of atrocities and malpractice brought against them. Similar letters were dispatched from Basrah and Koofah to and from , and to Koofah. Since no one was made the subject of atrocities, in each city they thought that this news was referring to other provinces, which might be having victims of these malpractices. All these accusing letters were directed against 'Uthman bin 'Affan

the Caliph who was charged with favoring repressive governors and refusing their dismissal. In view of the letters of complaint coming in torrents, 'Uthman bin 'Affan

to Egypt and Koofah respectively, to make inquiries into the affairs and inform the office of the Caliphate with the facts.

reached Egypt, both the sections growing angry with the governor and the followers of ‘Abdullah bin Saba brought 'Ammar to their own way of thinking. They held him back from returning to Al-Madeenah, ostensibly to avoid supporting “the atrocious ways” of 'Uthman bin 'Affan

. Muhammad bin Maslamah wrote to the Caliph from Koofah that both the common people and the noblemen were openly speaking against the Caliphate and showing signs of discontent. About the same time Al-Ash'ath bin Qays, Sa'eed bin Qays, Saa'ib bin Al-Aqra', Malik bin Habeeb, Hakim bin Salamah, Jareer bin ‘Abdullah, and Salman bin Rabee'ah who were wealthy, influential and courageous supporters of the Islamic Caliphate left Koofah for other places. In view of the public protest and uproar  prevailing over a vast area, Sa'eed bin Al-'Aas appointed Al-Qa'qaa' bin ‘Amr,

his deputy and left for Al-Madeenah, to personally meet the Caliph and give an account of the new developments in Koofah. With his departure, the people of Koofah wrote to Malik Al-Ashtar, who was then staying in Hims, that there was a complete vacuum in Koofah and they should come back without delay. In the absence of a strict governor, the antagonistic elements came out in open criticism and challenged the authority of the Caliph. Gradually they mustered enough courage to send a party of the disgruntled elements under the leadership of Yazeed bin Qays to reach Al-Madeenah to dislodge 'Uthman bin 'Affan

from power by force.  However, Al-Qa'qaa' bin `Amr

stood in the way and arrested Yazeed.

Yazeed implored Al-Qa'qaa' to forgive him because he had nothing more than some complaints against Sa'eed bin Al-'Aas, and his mission was simply to seek the deposition of the governor. Al-Qa'qaa' set Yazeed free. However, shortly after that Malik Al-Ashtar reached Koofah with his party from Hims. His arrival generated a new zeal into the subversive people and he declared his support to Yazeed bin Qays and his decision to join the forces of Yazeed. Al-Qa’qaa’ could not stop the joint forces of Yazeed and Malik. They marched out of Koofah and arrived at Jara'ah near Qadisiyah.

'Uthman bin 'Affan, the Caliph of Islam issued orders to all the governors to meet him in Al-Madeenah after Hajj for important consultations. In addition to these governors, the Caliph invited some men of sound judgement from Al-Madeenah. The Caliph put before them the issue of the prevailing anger and dissatisfaction against him and sought their advice. ‘Abdullah bin ‘Amr put forward his suggestion that the unruly elements should be engaged in Jihaad to fill their idle hours and charged them with disruptive activities and uprisings. Sa'eed bin Al-'Aas submitted the suggestion that the leaders of the troublemakers be dealt with a heavy hand, so that their punishments would scare away their followers. Even though the Caliph showed his agreement with this suggestion, he thought that this was a difficult task. Mu'awiyah came with the suggestion that governors of each province should uphold their responsibilities and clear the province off the existence of those troublemakers. ‘Abdullah bin Sa’d suggested the point that they were all greedy and could, therefore, be subdued by the power of the purse.

When the real causes leading to the riots and disruptions were inquired into, it came to light that they were all far-fetched and unfounded. Some of them raised the point that each one of the mischief-mongers and rioters should be put to death without showing any restraint. 'Uthman bin 'Affan

disagreed and said that he could only punish people according to the limits set by the Quran. Thus, the session came to an end without anything concrete being decided.

set about complaining against the governors and officers appointed by the Caliph. They began to write letters to the influential people of Al-Madeenah to create suspicion in their minds about 'Uthman bin 'Affan

. In response to the complaints, the people of Al-Madeenah became angry with the governors and officials and pressed the Caliph for their dismissal. However, when they would come out faultless after inquiries, the Caliph refrained from taking any action against them. They grew suspicious of the fair dealings of the Caliph. Men like Abu 'Usayd Sa'eedi, Ka'b bin Malik and Hassaan bin Thabit

rose to stop the disgruntled section from speaking against the Caliph, but to no avail.

When letters of complaint came pouring into Al-Madeenah from almost every province and city under the Muslim rule, some distinguished persons of Al-Madeenah called on the Caliph and drew his attention to the prevailing anger and dissatisfaction against the governors appointed by him. 'Uthman bin 'Affan

then selected some reliable persons and sent them to each province to look into the situation and come back with a complete report. Thus, Muhammad bin Maslamah was sent to Koofah and Usamah bin Zayd and ‘Abdullah bin 'Umar

were sent to Basrah and respectively. In this way, each large or small province and territory was given one official to report the state of affairs to the Caliph.

All the investigators returned with reports that none of the governors were found guilty of any evil act or excesses, and all of them were carrying out their duties within the bounds of Sharee’ah. Besides, no man of understanding and wisdom was found against any governor or the Caliph. The people of Al-Madeenah received the reports with satisfaction. However, very soon the situation took a disturbing turn. The Hajj season was at hand and taking advantage of the opportunity, the Caliph proclaimed among the citizens of every city and town: "Reports are pouring into Al-Madeenah highlighting the excesses of the governors of various provinces. So, I have sent orders to all the governors to be present at Hajj. Anybody bearing complaints against anyone's governance should come and lodge it in my presence and get his rights either from me or from the governor after the verification of the facts."

The caliphate of 'Uthman -I

The caliphate of 'Uthman -II