Love Your Brother for the Sake of Allah 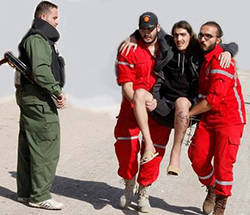 In our contemporary society, friends are made at school, at work, in neighborhoods and even over the Internet. Friends are made and kept for a variety of reasons. People make friends with others who share common interests, hobbies, and even vices. The final goal of a friendship is often simply company, a desire to spend time with someone, or doing something that they both enjoy. A Muslim ought to choose friends more carefully and critically.

Certainly, Muslims, like everyone else, want friends who share interests and who are fun to be with. We all enjoy having a picnic with a friend or going out to dinner with friends. Who wouldn't like to go to a gathering with some of their best friends? But that is not only what a true Islamic friendship is all about. In fact, an Islamic friendship is not that simple at all. In Islam, true friendships are bound by brotherhood and sisterhood, bonds that are stronger than typical friendship. They are bonds that exist for a much higher reason and with a greater goal.
Muslims make friends knowing that the relationship they will ensue is an important bond between two people who share mutual goals. Their friendship is one that exists primarily for the sake of Allah, the Almighty. The love and camaraderie that are born from such a friendship is a secondary benefit, for sure.

True Love for The Sake of Allah

Love for others comes in different forms. Love between a husband and wife is one type of these forms, all friendship is another form. However, all forms of fondness that any one person can have for any other person, for the purpose of this article, will be referred to as love.
Realistically, pure love of another person only for the sake of Allah is difficult. Few people can attain such a friendship, which is why Allah rewards such an act of faith generously. The Prophet

explained, “Allah said: those who love one another for My glory will be upon daises of light [high positions], and the Prophets and martyrs will wish that they had the same.” [At-Tirmithi]
Nevertheless, many of us, in an attempt to reach this high level of faith, must try to make and build strong friendship that benefit us and our Ummah (Nation). In Islam true friendship is brotherhood or sisterhood- a bond that is strong and enduring. In this bond, men and women can find the sweetness of faith as the Prophet

said: “There are three things that whoever attains them will find the sweetness of faith: if Allah and His Messenger

are dearer to him than anyone or anything else; if he loves a person solely for the sake of Allah; and if he hates to return to disbelief after Allah has rescued him from it, as much as he would hate to be thrown into the Fire.” [Al-Bukhari and Muslim]
The rewards of loving another for Allah's sake are consistent with its importance. Its impact is not singular- it affects the entire society. For the entire society to exist in harmony and peace, its constituents must be at peace. If we could each want for our friends what we want for ourselves, the world would be a better place. This is what Islam ensures. If there is brotherhood and unity among the people, the society at large will be united.

instilled a deep-rooted love in the hearts of the companions, may Allah be pleased with them, to create a model Islamic society that all Muslims thereafter can emulate. Prophet Muhammad

tried to eliminate hatred, jealousy and rivalry by inducing brotherhood, sincere love and friendship. The Islamic society is ideally built upon the foundation of brotherhood, as the Prophet

advised: “Believers are like a structure, parts of which support one another. The believers, in their mutual friendship, mercy and affection, are like one body; if any part of it complains, the rest of the body will also stay awake in fever.” [Al-Bukhari and Muslim]

How to Love Someone

recommended a very simple but significant way to help Muslims gain brotherhood saying: “I swear by the One in Whose hands my soul is, you will not enter Paradise until you believe, and you will not believe until you love one another. Shall I not tell you of something that if you do it, you will love one another? Spread salaam [greeting one another saying: As-Salaam Alaykum] amongst yourselves.” [Muslim]

Greeting each other frequently and lovingly is the first step to achieving the ideal brotherhood.

It would seem that greeting another with “As-Salaam Alaykum” is an easy action. However, given the nature of men and women and our vulnerability to changing emotions, sometimes these simple words are hard to utter. In other words, there are times when even this simple greeting is hard to say to someone with whom we might have argued. The beauty of Islam is that it is realistic. So, it is allowed for us to take time to "cool off," but we are not allowed to cut off friendships based on rash and unreasonable emotions. The Prophet

words and actions live in our hearts and minds.