The concept of worship - I 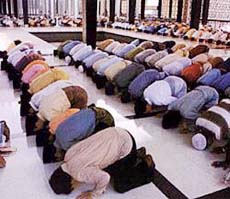 A Muslim should go on in life remembering the purpose of his creation and the objective for which he exists in this life. Allah clarifies to us this objective saying (what means): “And I created not the jinn and humans except that they should worship Me (alone).” [Quran 51:56].

This verse plainly explains the purpose of our creation; that our lives should not be spent except in worshipping Allah. Prayer, fasting, alms giving, Hajj, truthfulness, trustworthiness, being dutiful to parents, supplication, reading the Quran, hoping for Allah’s mercy and being afraid of His punishment are all acts of worship.

The best deed to perform: The greatest type of worship is to perform that which Allah makes obligatory on His servants and to refrain from all that He forbids. Abu Hurayrah narrated that Prophet

(may Allah exalt his mention) said: “Allah says: ‘The most beloved deeds with which my slave comes nearer to me are what I have enjoined on him.’” (Al-Bukhari).

said: “Since the Salaf lived their whole life in worship, it is then necessary for us to know with which type of worship they started, and which one have they given priority.” He then answered: "The best acts of worship are the most pleasing to Allah in that particular time. The best act of worship during the presence of a guest is to take care of him and not to be distracted from that by other recommended acts of worship. This is also in performing one’s duties towards one’s wife and family. The best act of worship in the night is to be occupied with prayer, reciting the Quran, supplication and Thikr. The best thing during the time of the Athaan (i.e. the call for prayer) is to leave whatever worship one is doing and answer the Mu`aththin (i.e. the one calling the Athaan) by repeating what he says. The best thing during the time of the five obligatory prayers is to exert one's efforts in their prompt performance. The best thing when the poor is in dire need of assistance is to assist him and give that preference over supererogatory Thikr. The best thing to do when your brother is sick or dead is to visit him, attend his funeral, and give that priority over your supererogatory Thikr. And the best thing to do when you are afflicted and suffer people’s harm is to be patient and not to run away from them." [End of quote]

The conditions of accepting an act of worship: Indeed what has afflicted Muslims in the course of their long history and what is afflicting them today is a consequence of their deviation from the real concept of worship and application of the two conditions for acts of worship to be accepted, which are: sincerity and following the path of the messenger of Allah

. While abandoning sincerity leads to directing acts of worship that are solely Allah’s to others besides Him; lack of following the path of the Prophet

However, some people restrict the concept of worship to rituals only. Whenever this set of people works, they abstain completely from worship and whenever they worship, they keep away completely from work. This is unfortunately the most common belief. It is the people who hold this concept who say, “What does religion have to do with a woman’s dressing and her work?" "What does religion have to do with our personal behaviour?" Their purpose is to remove religion from one’s life and confine it only to the mosque. That is why you see someone who prays, fasts, and reads Quran, yet he cheats, bribes, takes bribes and wrongs others. You also see a woman who prays yet she disobeys laws of Allah by dressing immodestly and mingling with men.

Deeds which one performs habitually become acts of worship through good intentions. The farmer in his farm, the labourer, the trader, or the practitioner of any other profession is capable of turning his occupation into an act of worship, provided that he does not tarnish it with cheating, lying, tricking etc. This is the concept of worship in its wider sense. To have a full imagination of acts of obedience makes a Muslim full of good, mercy, and benefits for his fellow human beings, thereby encouraging him to do more acts of worship and assist his nation.

It is possible for you to add a viable brick into the structure of this nation and add to your scale of good deeds weighty works, which may appear insignificant to you. Listen to what the Prophet

said: “Do you want me to tell you of what is better than the rank of fasting, prayer and charity?” The Companions, may Allah be pleased with them, said: “Yes, O Messenger of Allah.” He

said: “Conciliating between people among whom there is discord.” (Abu Daawood) He

also said: “Whoever visits a sick person or a brother of his for Allah’s sake, a caller will call him thus, ‘You are good and your passage is good. May you take Paradise for an abode.’ ” (At-Tirmithi).

Abu Hurayrah, may Allah be pleased with him, reported that the Messenger of Allah

said: “While a man was walking along the road, he saw a branch of a tree with thorns lying on the road and he removed it, so Allah appreciated his deed (and thus rewarded him) for that and forgave his sins.” (Muslim). It is also reported that the Messenger of Allah

said: “Deeds of my nation – both the good and evil – were shown to me and I found that among their good deeds is the removal of harmful things from the pathway.” (Muslim).

Restricting righteous deeds to special acts of worship makes seekers of piety spend all their time in repetition of limited deeds as if they do not see that other ways lead to the pleasure of Allah.