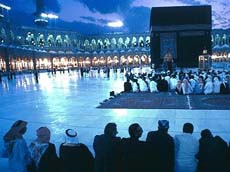 In the second part of this topic the word Muhsin (a doer of good) was mentioned in one of the quoted verses of the Quran which is derived from Al-Ihsaan which is the performance of good; but what then is Al-Ihsaan (good deed) that attracts such a high position before Allah and makes the slave deserving of such a great description?

The answer was provided by the Messenger of Allah

(may Allah exalt his mention) when he said, “Al-Ihsaan is to worship Allah as if you see Him. And even though you do not see Him, He sees you!” (Muslim). This narration means that man should worship Allah, mindful of his closeness to Him and his standing before Him just as if he is seeing Him plainly. This state brings about Allah-consciousness and love of Allah and purifies ones acts of worship. Anas bin Maalik, may Allah be pleased with him, narrated that a man said: “O Messenger of Allah! Tell me a short word that could benefit me.” The Prophet,

said: “Pray as if you are in your farewell prayer, for if you do not see Allah, He sees you.” And the meaning of the phrase “if you do not see Him, He sees you” is that if one cannot worship Allah as if one sees Him, he should then worship Him with the conviction that Allah does see him and that none of his affairs is concealed from Allah. Haarithah, may Allah be pleased with him, related: “The Prophet

told me: “O Haarithah! How do you find yourself this morning?” I replied: “A true believer.” then the Prophet

then said: “You have indeed seen (what you claimed to have seen). Therefore continue on your state of worship, O slave whom Allah has illuminated his heart with faith!”

Al-Ihsaan is to observe prayer in the best form, moving closer to Allah and beseeching Him secretly during the night when people are asleep, and it is also being benevolent to people. Allah Says (what means): “Verily, they were before this Muhsins - plural of Muhsin (i.e.  doers of good). They used to sleep but little by night (invoking their Lord and praying with fear and hope). And in the hours before dawn they were (found) asking (Allah) for forgiveness. And in their properties there was the right of the beggar (who asked) and the poor (who do not ask others).” [Quran 51:17-19].

Al-Ihsaan also means striving against one’s soul, struggle against Satan, hypocrites and unbelievers. Allah Says (what means): “And many a Prophet fought (in Allah’s cause) and along with him (fought) large bands of religious learned men. But they never lost heart for that which did befall them in Allah’s way, nor did they weaken nor degrade themselves. And Allah loves the patient ones. And they said nothing but, ‘Our Lord! Forgive us our sins and our transgressions (in keeping our duties to you). Establish our feet firmly and give us victory over the disbelieving folk! So Allah gave them the reward of this world, and the excellent reward of the hereafter. And Allah loves the Muhsins (doers of good).” [Quran 3: 146-148].

It is also an aspect of Al-Ihsaan to spend in the way of Allah whether one is rich or poor and to suppress ones anger and forgive the ignorant ones when they misbehave. Allah Says (what means): “Those who spend (in Allah’s cause) in prosperity and in adversity, who repress anger and who pardon men; verily, Allah loves the Muhsins (doers of good).” [Quran 3: 134].

It is a part of Al-Ihsaan to surrender to the truth, to love it and to listen to the revealed Book of Allah with sound and healthy minds and attentive ears. Allah Says (what means): “And when they listen to what has been sent down to the Messenger, you see their eyes overflowing with tears because of the truth they have recognised. They say, “Our Lord! We believe; so write us among the witnesses. And why should we not believe in Allah and in that which has come to us of the truth (Islamic monotheism)? And we wish that our Lord will admit us (in on the Day of Resurrection) along with the righteous people (Prophet Muhammad

and his companions). So because of what they said, Allah rewarded them with gardens under which rivers flow (in ), they will abide therein forever. Such is the reward of the Muhsins (doers of good).” [Quran 5: 83-85].

Allah has promised a great reward for the Muhsins in this world and the next. He promises them protection and good things of this life when He Says (what means):  “Truly Allah is with those who fear Him (keep their duty unto Him), and those who are Muhsins (doers of good).” [Quran 16: 128].

Among the reward of good deeds is that it makes Muhsins win Allah’s love. Allah Says (what means):  “Verily, Allah loves the Muhsins (doers of good).” [Quran 3: 134].

Among the rewards of good deeds is that Allah will impart knowledge into the heart of the Muhsins, which will enable him to differentiate between lawful and unlawful things, and between truth and falsehood. Allah Says about Yoosuf (what means): “And when he (Yoosuf) attained his full manhood, We gave him wisdom and knowledge. Thus We reward those who are Muhsins (doers of good).” [Quran 12: 22].

Allah also rewards Muhsins by praising them and making His slaves praise them as well. The Almighty Says about prophet Nouh (Noah) (what means): “Salaam (peace) be upon Nouh (from Us) among the Alamin (mankind, jinn and all that exists).” [Quran 37: 79].

About the reward of the Muhsins in the hereafter, Allah Says (what means): “For those who have done Al-Ihsaan is the best (reward i.e. ) and even more (i.e. having the honour of glancing upon the countenance of Allah). Neither darkness nor dust nor any humiliating disgrace shall cover their faces. They are the dwellers of , they will abide therein forever.” [Quran 10: 26]

The word “more” means having the prestige of seeing the Countenance of Allah as it has been successively related in many narrations that the believers will see their Lord on the day of Judgement. As a matter of fact, having the privilege of seeing the Gracious Countenance of Allah on the Last Day is a suitable reward for Al-Ihsaan, since Al-Ihsaan means to worship Allah in this world as if one sees Him. Glancing at His Gracious Countenance plainly on the Day of Judgement then becomes the greatest reward for Muhsins. As regards the unbelievers, their eyes will be screened from seeing Allah on that day, as their hearts were veiled from knowing Allah and fearing Him in this world.

The concept of worship -I