Etiquettes of differing in Islam 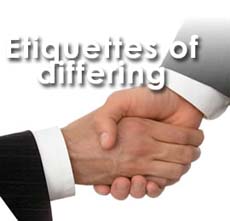 Islam has imposed high standards for how the Muslim who follows the methodology of the Prophetic Sunnah (tradition) should deal with his fellow Muslim brother who has differed with him on an issue of 'Ijtihad' (exercise of independent judgment in matters that have no specific mention in the Quran or Sunnah).

How outstanding is the statement of the Messenger of Allah

: "Indeed I have been sent to perfect noble manners." [Al-Bukhari]

Among these manners are:

1 – Having an open heart by accepting when your Muslim brother points out some mistakes that you have made, and knowing that this is sincere advice which he is giving you as a gift for Allah’s sake. This is what is referred to as humbleness. Refusing to accept the truth and becoming angry as a result is actually from pride.
Indeed, the most truthful person - Muhammad

said: "Pride is to reject the truth and to scorn others." [Al-Bukhari]

There are many examples of modesty that our pious predecessors have demonstrated to us; from them is what Al-Hafith Ibn 'Abdul-Barr, a famous Muslim scholar, once related: “A number of people informed me that Abu Muhammad Qasim ibn Asbagh said: 'When I travelled to the east, I stopped at Al-Qayrawan (in Tunisia) and listened to a Hadeeth that was memorized by Musaddad from Bakr ibn Hammad. I then proceeded to Baghdad and stayed there for some time.

: "A people from Mudhar (a famous Arab tribe) came in striped woollen shirts" (Mujtabi An-Nimar). He said to me: 'It is Mujtabi Ath-Thimar.' So I said: ‘'Mujtabi An-Nimar' is how I read it out to all those I read it to in Andalus (Andalusia) and Iraq.'

“So, he (Bakr) said to me: ‘By entering Iraq, you have contradicted us and become arrogant with us.’ Then he said: ‘Let us go to that Shaykh (scholar) - a Shaykh who is in the mosque - for he has the like of this knowledge.’ So I went with him and we asked him about this issue, so he replied: ‘It is Mujtabi An-Nimar, just as you said. They used to wear 'Nimar' (striped clothing), with pockets at their fronts, and Nimar is the plural of Namirah.’ Bakr ibn Hammad then said, whilst holding his nose: ‘My nose lowers itself to the truth, my nose humbles itself to the truth’, and then departed."

Do you not see this amazing sense of justice? How dire is our need for it today! However, this is not possible except for those who purify their intentions for Allah’s sake. Imam Malik, the founder of one of the four schools of Islamic Jurisprudence

said: "There is nothing more scarce in our time than justice."

So, what is the case in our present time, a time in which false desires are plentiful? We seek refuge in Allah from misguiding trials.

2 –Using the finest and most appropriate words when discussing and debating with one's brother, for Allah, the Exalted, Says (what means): "…And speak to people good [words]…" [Quran 2:83]

said: "There is nothing that will be heavier in the believer's scales on the Day of Judgement than good character. Indeed Allah hates the wicked and the ill-mouthed person." [Abu Dawood]

3 –Discussing with one's brother and rebutting with that which is better, for that is even more appropriate. Your guiding principle in this should be the truth and clarifying the truth; it should not be to seek victory for yourself.

A person should be sincere when he speaks. If one feels that he will argue with his brother, then give him the greeting of peace (Salam) and remind him of the saying of the Messenger

: "I guarantee a house on the outskirts of Paradise for the one who abandons arguing, even if he is upon the truth." [Abu Dawood]

said: "Argumentation corrupts friendship and unties the strongest of bonds. The least harm it contains is conflict, and conflict leads to severing relations."

said: "I heard Mis`ar saying, whilst addressing his son Qidam: ‘I present to you my advice, O Qidam; so, listen to a father who is compassionate to you. As for joking and argumentation, leave them; they are traits I do not approve of for a friend. Having tried them, I did not find them praiseworthy, neither for a close neighbor, nor for a close friend.

have left us splendid examples of the etiquettes of differing; amongst them is what Imam Al-Bukhari and Muslim

who said: "I was with Sa`eed ibn Jubayr when he asked: 'Who amongst you saw the shooting stars last night.' I replied: 'I did.' Then I said: 'Not because I was praying at that time, but because I had been stung by a scorpion.' He asked: 'So, what did you do?' I replied: 'I used Ruqyah (healing oneself or others by reciting verses of the Quran or prophetic supplications).' He asked: 'Why did you do that?' I said: 'Because of a Hadeeth related to me by Ash-Sha`bi.' He asked: 'What did he relate to you?' I replied: 'He related from Buraydah ibn Al-Husayn who said: "There is no Ruqyah except for the evil eye or a sting."' Sa'eed said: 'He has done well in halting at what he has heard [of knowledge]. However, Ibn 'Abbas

. He was not harsh; rather, he was kind to the other person due to him acting upon evidence. Then he explained to him what was better, with a gentle rectification supported by proof.