In the Name of Allah, the Most Gracious, the Most Merciful:

said that it means morning, and this view seems reasonable. Allah directs believers to seek refuge in the Lord of the Falaq.

2. "From the evil of that which He created."

Meaning, to seek refuge from the evil that He (i.e., Allah Almighty) created. His creation includes Hell, Iblees (Satan) and his offspring, and other evil things.

3. "And from the evil of Ghaasiq (darkness) when it settles."

One should seek refuge from the evil of nightfall. According to Ibn Zayd, the Arabs termed the setting of the Pleiades star as 'Ghaasiq' and believed that after its setting and at its rising, disease increases and spreads. Some commentators say that the word Ghaasiq means moon. They base their argument on a Hadeeth (narration) where the Prophet

once held the hand of 'Aa'ishah, may Allah be pleased with her, and pointed to the moon, saying: "Seek refuge from the evil of this Ghaasiq." [Ahmad] However, the rising of the moon and the appearance of the stars are things that happen at night.

4. "And from the evil of the blowers in knots."

5. "And from the evil of an envier when he envies."

"…The blowers in knots…" refers to sorcerers. Mujaahid

said: "(It is) when they make their incantations and blow on the knots." Ibn Jareer

quoted Ibn Taawwoos as saying, on the authority of his father: "There is nothing closer to Shirk (polytheism) than those incantations used as a protection from snakes and insanity, etc." Such incantations are made to blow on a snake bite or magic-stricken man. A Hadeeth says that Jibreel once came to the Prophet

and asked: "O Muhammad! Are you sick?" When the Prophet

replied in the affirmative, he said: "Invoke the Name of Allah against every disease that pains you, against the evil of every envier and against any evil eye. May Allah heal you." The disease referred to in this Hadeeth was probably a magic spell. Allah then healed His Messenger

and repelled that magic.

reported that a Jew bewitched the Prophet

who remained under its spell for several days. Then Jibreel, peace be upon him, came to him and informed him that such and such a Jew had bewitched him and had hidden a knotted rope down such and such a well and asked him

to send somebody to get it. When the Prophet

received it, he untied the knots, and the spell was broken. He never mentioned it to that Jew nor showed him any anger.

'Aa'ishah, may Allah be pleased with her, narrated: "Once when the Prophet

was under a magic spell, he thought that he had come to his wives while he had not done so. Once, he said to me: "I asked my Lord and He showed me. Two persons came and one sat near my head and the other near my legs. The man sitting near my head asked the other: 'What has happened to this man.' He replied: 'He is under a spell.' (The first) asked: 'Who bewitched him?' (The second) answered: 'Labeed Ibn Al-A'sam from the Banu Zurayq tribe. They are allies of the Jews.' The (first) man asked: 'What was the item used for charming?' The other answered: 'The comb and the hair.' (The first) asked: 'Where are those things?' The other answered: 'In the well of Dharwan, under a rock."' The Prophet

sent 'Ali, may Allah be pleased with him, to the well and had the things dug out. I ('Aa'ishah) suggested that the magician should be punished. The Prophet

replied: "All praise is due to Allah who healed me; I do not like to incite people for myself." [Al- Bukhari] 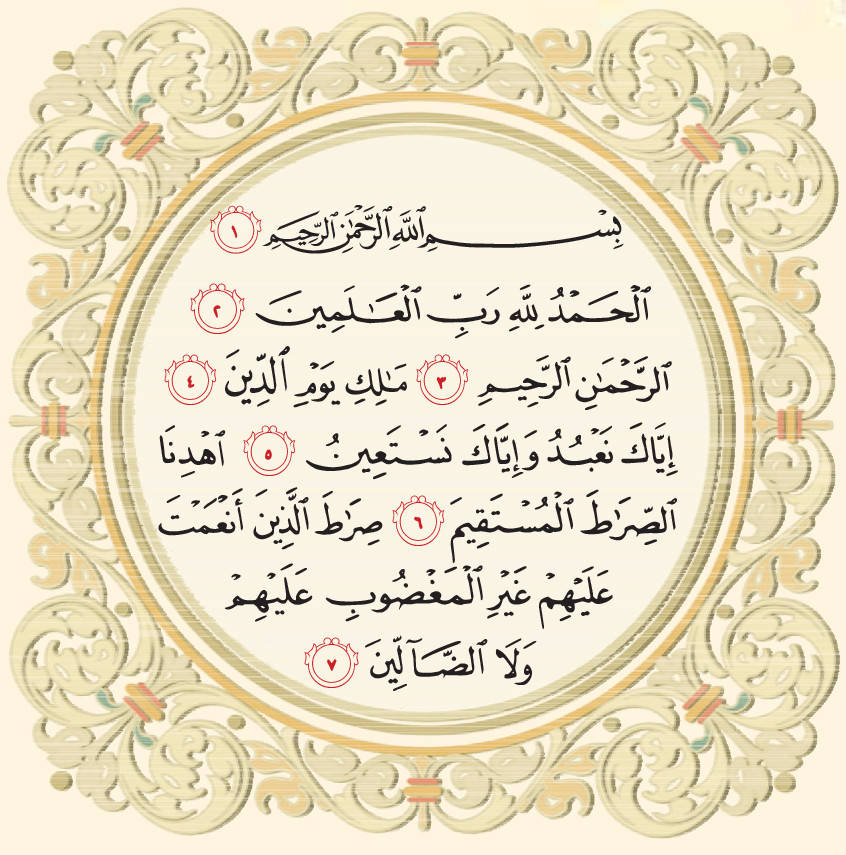 The Soorah (chapter) of Al-Faatihah is accorded a special status in the Quran, being its opening chapter. It is given other names, such as: Umm Al-Quraan (Mother of the Quran), Umm Al-Kitaab (Mother...More