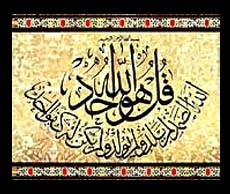 Soorah Al-Ikhlas literally means: The Chapter of Purity, Sincerity, and Unity of Allah. It is equal to one third of the Quran. In this chapter, Almighty Allah Says (what means):

He neither begets nor is born.

1. Whatever the Messenger of Allah

brought with him, that alone is real. It is obligatory to obey it and forbidden to deviate from it as it is the Straight Path which has no curves.

2. The Straight Path is only one and whoever deviates from it strays onto the wrong path, innovation and injustice. Almighty Allah commands in the Quran (what means): {And [moreover] this is My path, which is straight, so follow it; and do not follow [other] ways, for you will be separated from His way…} [Quran 6:153]

3. The Straight Path is that of the Ummah (Muslim Nation) which lies in between two extremes. Hence, we supplicate in every Rak'ah (unit of prayer) with what means: {Guide us to the Straight Path} [Quran 1:6] that Allah may guide, support and help us to obey Him and keep us steadfast on His Path. This is the Path of those who were favoured by Allah: the Prophets, the truthful, the martyrs and the righteous, and these are the finest possible company.

4. The Concept of Tawheed (The Oneness of Allah the Almighty) has been explained in Soorah Al-Ikhlas by separating and purging it from Shirk (Associate anything with Allah).

saying: “O Muhammad! Tell us about the genealogy of your Lord” whereupon Allah revealed this chapter.

6. From authentic Prophetic sayings, it is proven that this chapter is equal to one third of the Quran. The substance of the statement of Ibn 'Abbas, may Allah be pleased with him is that the Quran consists of three fundamental objectives:

a) Commands and prohibitions which contain laws and practical ways. These form the subject matter of the science of Fiqh (jurisprudence) and Ethics.

b) Tales and narratives which include the stories of the Prophets and Messengers of Allah, may Allah exalt their mention, and their communities, the punishments and disasters which befell those who resisted and denied the Messengers of Allah, and also the promises, rewards, warnings and types of doom that come from Allah.

c) Knowledge of Tawheed and the description of those matters which relate to the Names of Almighty Allah and His Attributes, which to have faith in is obligatory upon the servant of Allah (i.e. each Muslim). This has precedence over the first two.

Soorah Al-Ikhlas contains the third objective and a general description of it. Thus, it is correct to say that it is equal to one third of the Quran.

7. This chapter contains, comprehensively, the knowledge of Tawheed and its principles, which form the essence of the belief in Almighty Allah. Allah's command (what means): {Say: 'He is Allah, [who is] One} [Quran 112:1] negates partnership with Him in every sense, whether it concerns His Self, His Attributes or His Actions. It also demonstrates the distinctiveness of Allah in His Perfection, Magnificence and Majesty. The word Al-Ahad (the One) is not used in affirmation for anyone besides Allah, since Ahad is more emphatic than Waahid.

9. Affirmation in His Oneness negates all forms of polytheism and similitude. Affirmation of all the meanings of As-Samad (the Eternal Refuge) includes all the noble Names and the most exalted Attributes. This is the Tawheed of Affirmation.

10. The Tawheed of Purity is in the verse (what means): {He neither begets nor is born, Nor is there to Him any equivalent.} [Quran: 112:3-4] This statement can also be understood from the general statement: {Say: 'He is Allah, [who is] One.} [Quran 112:1] Nothing came out of Him nor did He come out of anything. He has no equal, no likeness and no similarity.

11. The concept of Tawheed dominates this chapter. The affirmation of Oneness for the Lord is in total and absolute contradiction to all forms of polytheism. His character of being: {Allah, the Eternal Refuge} [Quran 112:2] proves all His Attributes: that He cannot suffer from any defect, that He has no father or son, which is an implication of Him being in no need, and that all is in need of Him, as well as negation of any equal, which includes negation of similarity, resemblance and likeness. This chapter includes all of these matters and is, therefore, rightly deserving of being called equal to a third of the Quran. 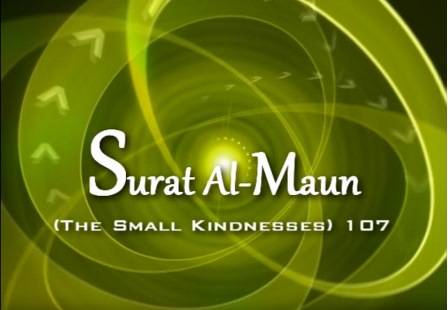