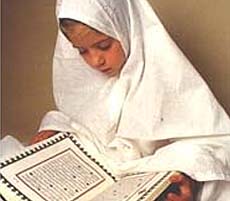 The Noble Quran is the literal words of Allah that He revealed as an infallible source of legislation for mankind to live an organised life by. It contains regulations and recommendations about all aspects of life and references to the Hereafter. Being so important, the Quran must be read, written, and recited correctly and clearly, so as not to create any sort of ambiguity or misunderstanding whatsoever. Allah Almighty addressed His Messenger Muhammad

(may Allah exalt his mention) in the Quran, Saying (what means): "…And recite the Quran with measured recitation." [Quran 73:4]

Listening to the Quran being recited correctly is enough to soften even the hardest of hearts. Muslims and non-Muslims alike find it a deeply moving experience, even if they do not understand what is being said. Every Muslim has to recite Quran in prayers, but many of us do not realise that reciting the Quran correctly while observing the rules of recitation is not an advanced science for expert reciters alone, rather it is an obligation upon each and every one of us whenever we recite the Quran.

The Quran was revealed with Tajweed rules applied to it. In other words, when the angel Jibreel (Gabriel), may Allah exalt his mention, recited the words of Allah to the Prophet Muhammad

the ways in which it was permissible to recite the Quran. So it is obligatory upon us to observe those rules so that we recite it in the way it was revealed.

there was no need for people to study Tajweed because they talked with what is now known as Tajweed, so it was natural for them. When the Arabs started mixing with the non-Arabs and as Islam spread, mistakes in the Quranic recitation began to appear, so the scholars had to record the rules. Now, because the everyday Arabic that Arabs speak has changed so much from the Classical Arabic with which the Quran was revealed, even the Arabs have to study Tajweed.

The Purpose of Tajweed

The Quran is the word of Allah, and its every syllable is from Allah. Its recitation must be taken very seriously. The purpose of the Science of Tajweed, in essence, is to make the reciter proficient in reciting the Quran, observing the correct pronunciation of every letter with the rulings and characteristics which apply to it, without any exaggeration or deficiency. Through this, the reciter can recite the Quran according to the way of the Prophet

Each Arabic letter has a Makhraj (an exit or articulation point from which it originates) and Sifaat (attributes or characteristics). Knowing the Makhraj and Sifaat of each letter is an important part of Tajweed. Sometimes two letters have very similar exits, which makes mixing them up easy. So, if a person does not know the attributes of each letter, he may change the meaning of the words in Quran recitation. Observing the rules of Tajweed in reciting prevents the reciter from making mistakes in reciting the Quran.

The Ruling of Reading with Tajweed

who was a great Quran and Hadeeth scholar of the 9th Hijri century, stated in his famous poem that details the rules of Tajweed:
"And applying Tajweed is an issue of absolute necessity, Whoever doesn't apply Tajweed to the Quran, then a sinner is he."

Hence, applying the rules of Tajweed is an obligation to keep away from the major mistakes in reciting the Quran.

The scholars have divided the types of mistakes one might fall into when reciting the Quran into two:

2. Hidden mistakes: for which one may need to study Tajweed rules.

The majority of scholars agree that applying the Tajweed rules of the Quran such that the clear mistakes are avoided is an individual obligation (Fardh 'Ayn) upon every Muslim who has memorised part or all of the Quran, while applying the rules of Tajweed to avoid the hidden mistakes is a collective obligation (Fardh Kifaayah) upon Muslims. That is, there must be some students of knowledge who have knowledge of that. This is because the Quran was revealed with the Tajweed rules applied to it, and the Prophet

read it in that way, so it is an established Sunnah (Prophetic tradition or practice).

The list below shows the type of mistakes under each category:

Mistakes related to correct pronunciation of letters so that letters are not mixed up in a way that changes their meaning. Scholars and ordinary Muslims alike should avoid these.

• Changing one letter into another or a short vowel (Harakah) into another (e.g. changing Fat-hah into Dhammah or the letter Qaaf into Kaaf, etc)

• Not observing the elongations (Madd) at all. Reciting them quickly as if there is no Madd so that they turn into the length of a vowel.

• Making a Madd letter which out of a normal Harakah.

• Stopping or starting at an incorrect place so that the meaning is spoilt, like stopping at 'Laa ilaaha' (i.e., there is nothing worthy of worship), without completing 'illallaah' (except Allah).


There are various Prophetic narrations also showing us the importance of Tajweed. Umm Salamah, may Allah be pleased with her, was asked about the recitation of the Prophet

and she described it as a recitation: "Clearly-distinguished, letter by letter".