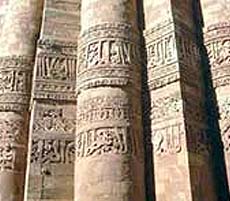 The preservation of the Quran: The Quran is the Book of Allah and the last revelation which abrogated the previous divine books. There is no doubt that this book is preserved from any alteration and falsification. It was transmitted to the Muslims, generation by generation, by absolute evidences. Since its revelation it was kept intact in its written form and memorized [by millions of Muslims], young and old people, males and females, Arabs and non-Arabs. No one could add a letter to it or remove a letter from it. The differences that might happen in the interpretation of the Quran does not mean that it was falsified, as interpreting the meaning of the Quran is not considered as adding to it or taking out anything from it. The difference in the interpretation of the verses is of two kinds:

and the like.
The verses of the Quran are interpreted by other verses or by a saying of the Prophet

. If there is no other verse to interpret the first verse and no Prophetic narration, then one has to resort to the sayings of the companions, may Allah be pleased with them, as they witnessed the revelation. If there is nothing of the above at all, then one interprets the verse according to the meaning of the words in the Arabic language as the Quran was revealed in Arabic. Therefore, there are some requirements when interpreting the Quran and there is even a science called the Usool Al-Tafseer (Principles of interpretation). As regards people who use verses from the Quran, if they can find any [that could apply to them], to justify their conduct, then we cannot rule by this conduct that the deficiency is in the Quran. Rather it is by the Quran that we judge whether the conduct of people is proper or not.
The Quran remained preserved in its original form through the centuries despite the weakness that the Muslim nation underwent, the vanishing of the Muslim caliphate, and the dispute and difference amongst the Muslims. Despite all this, the Quran remained preserved and protected by Allah, which is one of its miracles.
The Bible: Many people refer to the Injeel (the book that was revealed to prophet 'Eesaa, may Allah exalt his mention) by the term "The Bible". But one can surely say, and without any doubt, that the Injeel has been altered and changed by human beings throughout history and the original copy no longer exists.
On the other hand, some people use the term "The Bible" to refer the book used by the Christians, and to those people we say the following:
In the Quran Allah informs us that He revealed a number of books, including the pages of Prophet Abraham (Ibraheem

), the Psalms of Prophet David (Dawood

), the Torah of Prophet Moses (Moosa

), and finally, the Quran of Prophet Muhammad, sallalaahu 'alayhi wa sallam. Of these revealed texts only the Quran remains intact in its original form. All of the others (as complete books) have been lost, their remains have survived only as fragments or tampered with in some way so as to make their authenticity doubtful.
Nowhere in the Quran is the Bible even mentioned, to say nothing of its being among the revealed texts of Allah, or as Christian claim "The Word of God."  Further, we know from respected scholars that although some fragments of the Psalms, the Torah, and the Injeel (the teachings of Prophet 'Eesa

) may be found in the Bible, comprised of the Old and New Testaments, the Bible cannot rightfully be called "The Word of God."  Why is this so?
As one publisher (Tyndale House Publishers, Inc., Wheaton, Illinois) stated: 'The Bible may look like one book, but it is actually sixty-six books in one. Thirty-nine books make up what we call the Old Testament, and twenty-seven make up the New Testament. It is possible that more than forty writers were used by God to write all sixty-six books.' (Quoted from the "Holy Bible" – New Living Translation, Gift and Award Edition, l997, p. vii)
So if the Bible is neither narrated by God nor written by Him, and, as such, is not ‘the word of God,' then what is it?  By any objective criteria, the Bible is a book containing a compilation of stories, legends, folk tales, folk lore, myths, sagas, narratives, poetry, fragments of scriptures (fragments from the Psalms, the Torah, and the Injeel as already mentioned), letters (esp. in New Testament), visions, dreams, accounts of events from doubtful sources (not eye witnesses), editors’ or scribes’ notes, as well as human errors.
For those who believe in it, it is a book that has historical, cultural, moral and ethical values, and a source of spiritual teaching and guidance. It is a book held in high esteem, primarily by Christians who see it as a divine book and the source of their religious beliefs.  But, in the final analysis it is only a book with many limitations and imperfections which disqualify it from being called "The Word of God."  Whoever makes such a claim then the burden of proof rests with him. On the contrary, the Glorious Quran is the Speech of Allah and, through the Angel Gabriel, was revealed to Prophet Muhammad

; later compiled into a book more than 14 centuries ago it remains in its original form until today.
Common misunderstandings about the Bible: Some common misunderstandings about the Bible include the following:
* The Bible is one book, the Old Testament. The Bible contains sixty-six books (or more depending upon the denomination one belongs to).
* The Old Testament (OT) is the Torah followed by the Jews. The OT contains some fragments of the Torah which was lost and the Psalms, but the Talmud is the book followed by the Jews and is totally unrelated to the Bible.
* The New Testament (NT) is the Gospel of Prophet Jesus, or the Injeel. It is neither. It is made up of twenty-seven books, none of which was narrated or written by Prophet 'Eesaa although the NT may contain fragments of the Injeel (sayings and teachings of Prophet 'Eesaa). The Injeel as revealed through Prophet Jesus has been lost. The fragments which may be cited in the NT may not be authentic or in their proper context. So it is erroneous to equate the NT with the Injeel mentioned in the Quran.
* The Bible is a holy book, narrated, dictated by God and is infallible. While this is a claim, this misconception has already been addressed. Since the Bible is 'only' a book, there is no need to call it a forgery, a corrupted text, etc. The Quran is the only authentic "Word of God," His Speech, and Allah has promised to protect it from distortion of any kind until the Day of Judgment and He has kept His promise. Not one letter or syllable has been changed over the past l4 centuries.
The known existing Books of Allah -I