Beneficial means to reflect upon the Quran 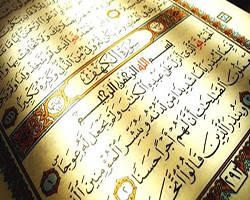 Quran is the light, healing, guidance and extra. But moreover, it is a great blessing and precious wealth of knowledge and wisdom for the intellectuals. Allah Says (what means): {[This is] a blessed Book which We have revealed to you, [O Muhammad

], that they might reflect upon its verses and that those of understanding would be reminded.} [Quran: 38: 29]

Reflecting upon the Quran is one of the reasons behind its revelation; it is the way to comprehend its rulings and find out its objectives and meanings. The Quran will not be properly understood, nor will its objectives be truly realized except by pausing at each verse and giving it its due right of pondering to discover the meanings and wisdom within it.

All perfect praise is due to Allah, that we still see many Muslims reciting the Quran day and night, which is good, yet many of them recite it without the due reflection or understanding. Thus people miss the main reason for which the Quran was revealed, to apply its rules, adher to its commands and refrain from its prohibitions.

In an attempt to practically apply the Words of Allah (which mean): {And remind, for indeed, the reminder benefits the believers.} [Quran: 51: 55] we designate this article to address some important ways by which a person may ponder the Nobel Quran and thus properly understand it.

One such way is to be acquainted with the Arabic language and its methods of expression. The Quran was revealed in Arabic, and can only be understood according to the rules of this language, and all scholars attach great importance to learning the Arabic language and encourage their students to learn it. The one who does not know the rules of the language could easily misunderstand the following Saying of Allah (which means): {And ask the city in which we were and the caravan in which we came} [Quran: 12: 82] and he will not be able to distinguish between the Sayings of Allah (which mean): {It is You we worship and You we ask for help} [Quran: 1: 5] and the saying: “We worship You,” and so on.

It must be pointed out here is that not every one who recites the Quran is asked to be a grammarian; rather, all he needs to obtain is enough knowledge and command on the language with which he can understand the Book of Allah and reflect upon it.

. We must know that he

was the authentic interpreter of the Quran and that his manners were all derived from the Quran. We must also know that he

was a practical Quran walking on earth, in the sense that he

clarified to verses that were revealed in general terms and verses that may have sounded confusing. Knowing all this makes a Muslim realize that in order to properly be able to reflect upon the Quran, he must return to the biography of the Prophet

and the authentic Sunnah.

Knowing the historical context in which specific verses of the Quran were revealed increases the reader's understanding, because many verses were revealed pertaining to a certain incident.

Without knowing the reason for its revelation and what it came down to address, one could read a verse but not really understand what it intends. For example the following saying of Allah (which means): {So do not weaken and do not grieve, and you will be superior if you are [true] believers. If a wound should touch you- there has already touched the [opposing] people a wound similar to it} [Quran: 3: 139-140]. This saying was addressed to the companions, may Allah pleased with them, during the battle of Uhud in which they suffered causalities fighting the disbelieving enemies. They are being rallied to fight harder by Allah's reminder that they had already inflicted similar suffering upon these enemies during their previous battle of Badr.

One other helpful factor in reflecting on and understanding the Book of Allah, is referring to the trustworthy books of interpretation of the Quran, and reading what the scholars have said. Such books contain many of the interpretations of the Salaf (righteous predecessors) whether the statements of the companions

or those who came after them

. Some of these books of Tafseer (interpretation) are by At-Tabari, Al-Qurtubi, Ibn Katheer and others

. Reading these sources helps the person reading the Quran reflect upon the verses and better understand them.

Reciting the Quran attentively while thinking of what one is reading is a matter that was stressed in the Quran, and it helps one reflect. Allah Says (what means): {Say, `I only advise you of one [thing] - that you stand for Allah, [seeking truth] in pairs and individually, and then give thought`} [Quran: 34: 46]. This better helps the reader understand the Quran.

Another important rule regarding reflecting upon the Quran is applying it to reality. This means (in short) that the Quran was not revealed just for a certain period or a specific place;but is applicable during all times and places. One can best understand The Quran and feel it alive, when it is applied to reality and to the issues of the Muslim nation. For example, every era has its own disbelievers and hypocrites and every era has its own 'Pharaohs' and oppressors.

To conclude, we would like to remind the reader with the following prophetic narration, of Abu Hurayrah

said: “Any group of people that assemble in one of the Houses of Allah to recite and study the Quran, tranquility will descend upon them, mercy will engulf them, angels will surround them and Allah will make mention of them to those (the angels) in His proximity.” [Muslim]. Note how the narration connected reciting and studying, and made this a precondition for the four magnificent virtues to be achieved.

Perhaps the reason for the current situation of Muslims is that we read the Book of Allah but do not reflect upon it, and thus our application coincides with our degree of reflection which led us to our current situation.