Nasrallah Says He Did Not Want War 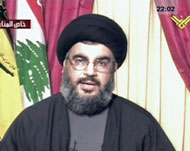 The leader of Hezbollah has said that he would not have ordered the capture of two Israeli soldiers had he known that it would trigger such a war.

"We did not think, even one per cent, that the capture would lead to a war at this time and of this magnitude. You ask me, if I had known on July 11 ... that the operation would lead to such a war, would I do it? I say no, absolutely not," Sayyed Hassan Nasrallah said in an interview with 's New TV station.

Nasrallah also said "contacts" for negotiations on a prisoner swap between and Hezbollah had already begun.

He said that and the United Nations had expressed interest in helping to mediate.

He did not specify in which capacity had expressed interest - on its own or as a mediator for .

Nasrallah said Nabih Berri, the Lebanese parliament speaker, was in charge of the negotiations.

The Israeli newspaper Haaretz has said  was willing to discuss an exchange.

However, an Israeli official said on Sunday: "There are no negotiations over the exchange of prisoners."

Massimo D'Alema, the Italian foreign minister, said on August 24 that he did not know about any "secret" talks to free the captives.

But the head of 's senate defense committee, Sergio De Gregorio, has said , which backs Hezbollah, wants to be involved. He said 's national security chief, Ali Larijani, had told him personally that he would ask Hezbollah to negotiate with .

The senator told Reuters on Sunday that he expected the talks to begin this week. He said the Israeli hostages were "still alive, fortunately", but declined to discuss their condition.

The Hezbollah leader also said that UN troops preparing to deploy in southern would not encounter any problems as long as their mission did not involve disarming his fighters.

"We have no problem with Unifil [UN Interim Force in ] as long as its mission is not aimed at disarming Hezbollah," Nasrallah said in the interview.

His comments came on the eve of a visit to by Kofi Annan, who was to discuss with Lebanese leaders the deployment of around 15,000 UN troops in southern and related security matters.

Nasrallah said he would welcome a meeting with the UN secretary-general and that contacts had been made towards that end, but he said that nothing had been finalized for security reasons.

Nasrallah told New TV that he did not believe the Jewish state was preparing for a second round of conflict.

"If the Israelis intended a second round, then they should reinforce their positions and presence (in south ) ..., not withdraw them," he said.

"Their displaced people are going back and they have started to rebuild the north. Someone who acts like that doesn't seem to be going to war. We are not heading to a second round."

Hassan Nasrallah, the leader of Hezbollah