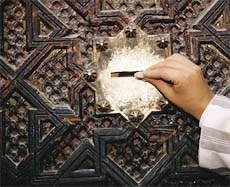 Currencies refer to gold and silver, as well as any type of money that takes their place and similar things such as shares, bonds and checks.

In the past, paper currency was not known, and people used to barter using commodities. This is a completely impractical and ineffective method in large communities. People graduated in their types of transaction until they had settled on using gold and silver. When Allah Almighty sent His Messenger

people were dealing with Deenaar (gold) and Dirham (silver) as their main currencies, and thus, when addressing the issue of Zakat the texts of the Quran and Sunnah referred to these two forms of currencies.

Thee are many verses on the obligation of Zakat on cash moneys. Allah Says (what means): "And those who hoard up gold and silver and spend it not in the Way of Allah, announce unto them a painful torment. On the Day when that will be heated in the Fire of Hell and with it will be branded their foreheads, their flanks and their backs. And it will be said unto them: 'This is the treasure, which you hoarded for yourselves. Now taste of what you used to hoard'." [Quran 9:34-35]

said: "Any owner of gold or silver who does not pay the Zakat due on it will, on the Day of resurrection, have his treasure heated in the Fire of Hell and then made into plates. His flanks, forehead and back will be branded with them. Every time they (the plates) get cold, they will be heated again, on a day that will last fifty thousand years. This will be done to him until Allah pronounces judgment on His slaves. Then one will be shown his path, leading him either to or to Hell." [Al-Bukhari and Muslim]

The Zakah due on cash money is two and one-half precent (2.5 per cent).

'Ali, may Allah be pleased with him, reported that the Prophet

said: "There is nothing (due) upon you in gold until it reaches twenty Deenaars (equal to 85grams). Thus, if you have twenty Deenaars at the end of year, then there is half a Deenaar levied on it [as Zakah]. Any additional amount will be calculated in this manner. There is no Zakah on wealth until it has been owned for one (lunar) year." [Al-Bukhari, Ahmad, Abu Daawood, and Al-Bayhaqi]

Allah permitted trade and earning from it if it is within lawful conditions and deals with lawful commodities. Islam also has prescribed Zakat on the wealth that a merchant uses for trade as gratitude to Allah. It is also a fulfillment of the right of the needy and as a contribution in the welfare of the Muslim community. Muslim jurists paid great attention to this type of wealth and wrote about it under the category of "trade goods." These included everything planned for sale and purchases with the purpose of attaining a profit, for Allah Says (what means) "O you who believe! Spend of the good things which you have (legally) earned, and of that which We have produced from the earth for you... " [Quran, 2:267]

Jurists, in general, say that this verse is discussing Zakah on trade goods. Regarding the interpretation of this verse, Imaam At-Tabari

said: "Allah means that you should pay Zakat on good legal earnings and pay the Zakat from the good gold and silver and not the ill-gotten ones."

In order for trade goods to be subject to Zakah, jurists

have established specific conditions that should be fulfilled. To fulfill these requirements, the owner should be in.

2.      The goods should constitute a Nisaab as determined by gold and silver. Nisaab is the minimum limit of wealth or property on which Zakat becomes obligatory. One does not have to pay Zakat on what he or she needs to make a living, such as tools or machines related to carpentry, farming, tailoring, or working as a doctor. All debts are subtracted from one's wealth. And if the resultant wealth reaches the Nissab, one must pay Zkaat.

3.      A full lunar year of Islamic calendar should have passed on these goods, starting from the day of Nisaab's possession.

Livestock animals are camels, cattle and sheep. Paying Zakat on this is obligatory based on the saying of Allah the Almighty (which means): "O you who believe! Spend from the good thins that you have earned." [Quran 2:267]

said to a man who asked him about migration: "Verily its matter is sever. Do you have any camels that you pay charity (Zakat) for?" The man said, "Yes."

said: "Then do so from behind the seas, for verily Allah will never disregard (decrease) anything of your deeds." [Al-Bukhari]

also said: "By the One Whom there is no (true) god besides Him, there is no man who has camels or cows or sheep, and he does not pay their Zakat, except that they will be brought to him on the Day of Resurrection larger and fatter than they ever were. And they will trample him with their hooves and gore him with their horns. Every time the last of them passes, the first will be returned to him (to start over). This will continue until judgment is passed between all the people." [Al-Bukhari]

Grain on which Zakat is applicable, is everything that is stored to be eaten, such as wheat, barley, beans, chickpeas, chickling vetch, peas lentils, corn rye, rice and the like. Fruit includes dried dates, olives and raisins.

This ruling is based upon the Almighty's statement (which means): "O you who believe! Spend from the good things that you have earned and form what we have brought out for you from he earth." [Quran 2:267]

said: "There is no charity in what is less that five Awsuq." [Al-Bukhari and Muslim] Five Awsuq is equivalent to 618 kilograms.

Zakat on such items is one-fifth. Scholars have ruled that there is no Nisaab for such items. However, some maintain that Zakat must be paid only when these items reach the Nisaab of gold.

said: "'There is no compensation for a wound caused by a domestic animal, a well (falling in it), a mine (working in it), and one-fifth is due on buried treasure." [Al-Bukhari]