The Prophet's guidance on treating wounds and cuts 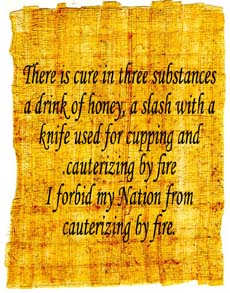 In the books of Imams Al-Bukhari and Muslim

it is narrated that Sahl Ibn Sa'd

was asked about how the Messenger's

injuries in the battle of Uhud were treated. Sahl

face was injured, his tooth was broken and the helmet he was wearing was smashed on his head. Fatimah

the daughter of the Messenger of Allah

was washing the blood off while 'Ali

was pouring water on her hands with his shield. When Fatimah

realized that the bleeding did not stop, she took a burned mat (of palm leaves) and inserted the ash in the wound of Allah's Messenger

and the bleeding stopped."

The ashes of burnt palm leaves are very effective in stopping bleeding, because it is a strong drying agent and because it has the least burning effect (on the exposed skin). Other strong drying remedies have a burning effect on the skin and cause the blood to be irritated and the bleeding to intensify. Further, when the ashes of palm leaves are applied alone or mixed with vinegar in a bleeding nose, it will stop the bleeding.

said: "Al-Bardi (papyrus) is effective in stopping bleeding and coating exposed flesh when it is placed on a wound. In old , paper was made of the Bardi which had a cold, dry condition. Bardi ash is effective in treating oral fungus and infection, hemoptysis (spitting up blood) and also prevents malignant infections from spreading.”

The Prophet’s guidance using honey, cupping and cauterizing as remedies

Abu ‘Abdullah Al-Maziri said plethoric (excessive substances) conditions are either sanguineous (bloody), bilious, phlegmy, or melancholic. Curing sanguineous plethora entails extracting the blood. If plethora was from the other three types, its cure is in softening the stool as warranted for each disease. The Prophet

has indicated that honey is used as a laxative and that cupping is used to extract [septic] blood. Some people said that when the slash by a cupping knife does not work, the last resort is branding by fire (cauterizing). The Prophet

mentioned branding by fire as a last resort when the body has a strong resistance against medicine, rendering it ineffective. The Prophet

then said: "I forbid my nation from branding by fire (cauterizing)," and in another narration: "I do not like to be branded by fire."

Cauterizing by fire should be the last resort and only used when warranted. The fire should not be the first choice because of the intense pain it causes and which will be used to remove a lesser pain!

Some doctors said that diseases related to the temperament are either material or non-material. The material types are either cold, hot, wet or dry or a combination of these conditions. The four conditions, hotness and coldness are effected, while the other two, wetness and dryness, are usually affected. When one of the two effective temperaments is stronger than the other, it is usually accompanied by one of the affected temperaments. Every type of temperament in the body has two parts, effective and affected.

Temperamental ailments are usually caused by whichever effective condition is stronger, hotness or coldness. The Prophet's

statement directs us to the origin of ailments, hotness and coldness. If the ailment was hot, the cure entails extracting the blood by cupping or puncturing the veins, both of which help extract the septic matter, cooling the temperament. If the ailment is cold, we treat it with heat, such as by taking honey. If we also need to extract the cold material that has caused the ailment, honey also helps in this case because it leads the various substances to maturity along with its other qualities of cleansing, softening, soothing and purging the affected organs. In this case, the septic material will be gently extracted while saving the body the annoyance of using strong laxatives.

The narration explains treatments for all types of physical ailments, just as we learned the treatment method for all simple ailments (accompanied by fever) from the narration: "The heat of the fever is a breath of the Hell Fire: cool it with water.”