Institution of marriage and social duties of Muslims 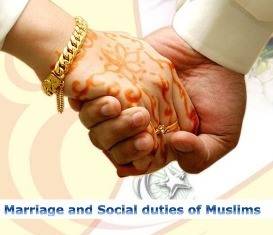 The foremost and fundamental institution of human society is the family unit. A family is established by the coming together of a man and a woman, and their contact brings into existence a new generation. It then produces ties of kinship and community, which gradually develop into a large society. The family is the institution through which a generation prepares the succeeding generation for the service of human civilization and for the discharge of its social obligations with devotion, sincerity and enthusiasm.

This institution does not merely recruit cadets for the maintenance and development of human culture but its guardians. They earnestly desire that those who have to replace them in the future should be better than themselves.  In this respect the family can be truly called the fountain-head of progress, development, prosperity and strength of human civilization on Earth.

Hence, besides the social problems, Islam devotes much attention to those relating to the family and strives to establish this important social unit on the healthiest and strongest foundations. According to Islam, the correct form of relationship between a man and woman is marriage, that is, the one in which full social responsibilities are undertaken by them and which results in the emergence of a family. Irresponsible behaviour are not condoned by Islam as innocent past times or ordinary transgressions. Rather, they are acts that strike at the very roots of human society.

Hence, Islam aims at purifying and purging the society of all activities that encourage such irresponsible action or provide opportunities for them. Regulations of Hijab (an out fit women must adhere to in Islam), ban on free mixing of men and women, restrictions on music and films and discouragement of the spread and propagation of obscenities and aberrations, are all intended to guard against this.

Their sole object is to protect and strengthen the institution of the family. Islam does not merely regard the desirable form of social contact as just permissible but holds and affirms it as a good and virtuous act. Indeed, it is seen as an act of worship. It does not simply look upon celibacy of an adult person with disfavor, but calls upon every young man and woman to take, in his turn, the social responsibilities of married life just as his or her parents did in their time.

Islam also strongly disapproves those rites, ceremonies or restrictions that make marriage a difficult and tedious affair. The intention of Islam is that marriage may become easy and fornication (and adultery) the most difficult thing in society, and not vice versa as it is in most of the societies today.

Hence, besides debarring a few specified relatives from entering into matrimony with one another, it has legalized marital relations with all other near and distant kith and kin. It has removed all distinctions of caste and community and permitted matrimony of any Muslim with any other Muslim, although being equivalent in status is a matter that is recognized when considering marriage. It has enjoined that the amount of Mahr (dower) should be fixed at a low and easy figure, the burden of which can be easily borne by the husband and has dispensed with the necessity of clerics and offices of compulsory registration.

In an Islamic society, marriage is such a plain and simple ceremony as can be performed anywhere before two witnesses, and a Wali (woman’s guardian or one whom he authorizes), though it is essential that the proceedings should know that the couple is now going to live a matrimonial life.

Within the family itself, Islam has assigned to the man a position of authority so that he may maintain order and discipline as the chief of the household.  Islam expects the wife to obey and look after the comforts and well-being of her husband and expects the children to behave accordingly with their parents. Islam doest not favor a loose and disjointed family system, which is devoid of any authority, control and discipline and in which someone is not pointedly responsible for the proper conduct and behaviour of its members.

Discipline can only be maintained through a central authority and in the view of Islam the position of father in the family is such that it makes him the fittest person to take over this responsibility.  But this does not mean that the man has been made a tyrant and an oppressor in the household and the woman has been handed over to him as a helpless chattel. According to Islam, the real spirit of marital life is love, understanding and mutual respect. If the woman has been asked to obey the husband, the latter has been called upon to exercise his privileges towards the welfare of the family and treat his wife with love, affection and sweetness.

Islam makes the marital bond strong but not unbreakable. It aims at keeping the bond intact only so long as it is founded on sweetness of love or for as long as at least the possibility of lasting companionship exists. When this possibility of lasting companionship exists. When this possibility dies out, it gives the man the right of divorce and the woman the right of separation. Under certain conditions, when married life has become a source of misery and nuisance, it also gives the Islamic courts of justice the authority to annul the marriage.