Albania under siege -I 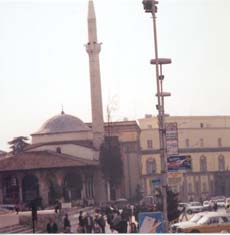 (Albanian Shqipëria, “Country of the Eagle”), is a republic in southeastern Europe, and it is officially known as the .

is a mountainous country in which about 70 percent of the land lies above 300 m (1,000 ft). Its mountains, which form a broad backbone from northwest to southeast, rise abruptly from the coastal lowlands to elevations of more than 2,400 m (8,000 ft). In the north are the most rugged mountains, where a massive limestone extension of the Dinaric Alps reaches inland for 40 km (25 mi) from nearby . In the central uplands lies , the country’s highest peak, at 2,764 m (9,068 ft). Strong erosive forces have created bare rock surfaces, deeply incised valleys, and a scarcity of meadowlands in this region. South of the Alps, the uplands are lower and more rounded, extending southeastward in a series of plateaus and ranges that merge with the Pindus Mountains in northern .

is rich in natural resources. The southwestern part of the country is well endowed with natural gas and petroleum. The northeastern region has large reserves of mineral deposits including chromium, copper, iron, and nickel. Large deposits of lignite (a soft, brown coal) are found near Tirana, and natural asphalt is mined near Selenicë. For centuries the forests have provided fuel in wood and charcoal.

Albanians contributed immensely to Islamic scholarship in literature, the arts, poetry, and thought. has a rich history of learning. Some of the most famous Albanian poets were influenced by Arabic stories and folklore and in many ways intellectually Islamized their Albanian civilization.

Although the Albanians embraced Islam, ethnic hatred and religious wars were a rarity. Rather conflicts were based on economic reasons. Christian and Muslim peasants united to challenge the rich aristocracy. According to Noel Malcom, the concept of ethnic hatred is a modern phenomenon, a result of Serbian nationalism. invaded and occupied in the early 1900's to "save" and "liberate" the Christian Slavic population from the Muslim Albanians.

The colonization was in fact very similar to the way that western European nations colonized Africa or . In 's case the Serbs invaded to liberate Serbs in , claiming that they had been oppressed during the centuries of Ottoman rule. They liberated the Albanian Serbs by giving them preferential treatment and special privileges while denying the same treatment to other Albanians who were mainly Muslims.

Over time, the bond that had existed between native Christians and Muslims eroded away and eventually created a polarized, often hostile environment. In a sense this is when real ethnic hatred started; a harmful by product of discriminatory Serbian policies. As Muslims globally lost power to the European Christians, the latter started to carve up Muslim territories. At the London Conference in 1912 was divided among , , and .

They also created a new state, Kosova, composed primarily of Albanians. This conference had numerous ramifications. First, , already shrunk in size by remapping, was split into two states-Albania and Kosova. Second, Muslims went from living in a primarily homogenous Muslim Albanian state to living as minorities in Christian countries.

This divide-and-rule policy also enabled non-Muslim countries to control and manipulate the smaller and vulnerable Muslim minority. In subsequent years, whenever Albanians have tried to come together they have failed largely because of their inability to unite and get together on issues.