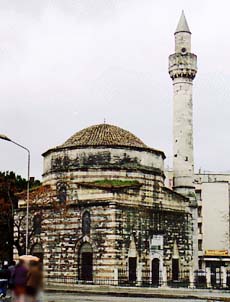 Today is surrounded by , , , and . Almost 4 million Albanians live in the . Another 2 million live in Kosova and an additional 700,000 in . Adding up the number of people scattered in the territories, there are an estimated 6.5 million ethnic Albanians.

One of the most startling issues in the Albanian drama of the present days has been its close association with atheism. Atheism was the official state policy since the Communist party's control in 1946. As such, atheism coupled with 's isolation from fellow Muslim countries has left the masses in an intellectual and religious vacuum; Islamic institutions symbolized by Madrasas (classical religious schools) and mosques have been systematically destroyed; scholars have been harassed, tortured and killed, crippling the educational system and leaving only very basic secular education as an alternative.

Although has a government and culture that has largely abandoned religion, it was not the only reason why people have stayed away from their faith. Muslims who claimed to be religiously educated may have helped in repelling people away from Islam as well. During the early 1990's when the current of democracy swept through Eastern Europe, closed government systems like that of 's slowly began to open up.

Although by no means a hallmark of a pluralistic society, the process enabled some to revive Islam and its activities too.
Many Muslims from other countries also came to propagate and preach Islam, but have not succeed fully in their effort to spread and attract people to Islam. One key reason is that visiting Muslims lacked cultural, social, political, and sociological knowledge of Albanian Muslims and the way they practiced and viewed Islam.

Furthermore, the communist era succeed in creating a community who is unliterate regarding their religion, to the extent that many Albanians perceived as something foreign for them that which the ‘foreign‘ Muslims came to propagate, which formed another obstacle facing the process of such propagation.

The Albanian population as a whole has not tasted the flavor of religion for decades. This is primarily because there are no primary, secondary or higher Islamic educational institutions.

And the classic Islamic literature simply does not exist. Most of this was destroyed or heavily suppressed during the Albanian Communist era. The people who have been educated have been indoctrinated along the secularistic lines.

And since most of these people had a fairly good education, they have been able to rise to the top of the society. Since they rule the masses, Albanians have seen a moral erosion of the social fabric of their society.

Religion thus has seen a trickle down effect; the more educated one becomes, the easier his or her piety gets debunked. Generally speaking, only the less educated have remained religious and have kept an emotional attachment to their historical roots. In other spheres of Albanian-Islamic contacts, used to have observer status in the OIC (Organization of Islamic Conference), which has since abandoned. At one time an Albanian Islamic Bank was even formed in the capital Tirana.

Other projects included building hospitals, schools, and cultural centers. However, the Albanians themselves were rather aloof about the development of relations with Islamic countries, because of some negative experience they had with some of the foreign brethren and because of a steady European influence. And while Islam falters and struggles to find its place in a predominantly Muslim society, Christianity is flourishing in .

Not only are they influential religiously, but they also are dominant in the media, politics, schools and the general state apparatus. The Pope of the Catholic Church visited and founded a large church in the heart of the capital city Tirana. The churches and their organizations are very active and effective in their propagation and presentation of Christianity.

They have established schools, hospitals, kindergardens, churches, welfare centers and seminaries. Many Christians who are native to the Balkans are well-versed in history, culture and psychology of the land. Much of the Christian community's funding come from , and other powerful and wealthy countries. Other churches also are secretly connected to Albanian criminal gangs who have a big hand in disrupting life in .

Most churches are however successful because they are well organized and display professionalism, in contrast to the Muslim counterparts. The influence of Europe in , however, is not evident in the self-righteous churches but in the corruption of the soul and the society, such as prostitution, crimes including theft, kidnapping, murders, rapes and other insidious affects of modernity are more visible today than they were in the history of .

Cultural morality, the highlight of Muslim Albania, is now disintegrating completely. Ultimately, is in the same predicament as the rest of the Muslim world; a state with a glorious past and an uncertain future trying to find its niche in a complex world. What compounds this situation is that while is a Muslim majority state, is not fully accepted by the Europeans.

And while Europe may never accept fully, the Albanian leadership desperately avoids contact with the Islamic world. It is a bewildering paradox. This paradox is reflected in the individual Albanian, who in his attempts of modernization gives up his or her historical heritage. But what is a human being without their heritage? and its sister state Kosova are surrounded by enemies, but if they are at peace with each other and with themselves, it will be much harder for its warrior neighbors to harass them.

The after all lived for 600 years even after the repeated assaults of the Crusaders. Muslims ruled for 700 years in the midst of . similarly can live Islamically in the heart of . The Kosova dilemma is not just a dilemma for the Albanians, it is the question of our day for the Muslims in our time.

In the medieval era, when the Mongols sacked and destroyed civilization, a few Muslims stood up and threw the Mongols back on their heels. The Mongols eventually converted to Islam, led Muslim lives and contributed positively to the experience of the Muslim nation. is under a Mongolian invasion all over again with surrounding Christians.