Iraq: oil and colonial powers -I 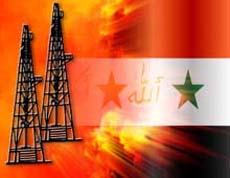 The Mongol sacked in 1258 and there was further pillage of this city by the Turkic conqueror Tamerlane in the following century. In less than a century, the Mongol conquerors themselves converted to Islam, and Islamic power resurged in and after being dislodged from the Arabian heartland. The story of the invasion of didn't end in 1258. The Ottoman Caliphate finally secured the control of in the 17th century.
In the vacuum left by the long decay and decline of this Muslim Caliphate, the Western colonial powers started penetrating most parts of the Muslim world. The invasion of in November 1914 by British forces exposed the military weaknesses of the Muslims, and inaugurated decades of direct political intervention by the West. Suspicions about Western intentions in the region date back to the British, who came as friends during World War I and ended up colonizing and dividing the Arab lands.

Western penetration drew the Middle East into the First World War, when the Ottoman Empire sided with and , in response, encouraged and supported the Arab Revolt against the Turks. By promising aid - and ultimate independence from the Ottomans - Great Britain encouraged the Arabs to launch a daring guerrilla campaign against Turkish forces, a campaign widely publicized in press coverage of the British Lawrence of Arabia.

By diverting Turkish strength and blocking the Turkish-German route to the Red Sea and , the Arab Revolt contributed substantially to the Allied victory, but it did not result in full independence for the Arab lands. Instead, and secretly agreed to partition most of the Arab provinces of the Ottoman Empire between them and eventually obtained mandates from the League of Nations: over , , and Transjordan (present-day Jordon); over and .
The mandates were inconsistent with British promises to the Arabs and, furthermore, contrary to the recommendations of President Wilson's King-Crane Commission, a group sent to the in 1919 specifically to ascertain the wishes of the Arab peoples.

The mandates, however, were granted, thus extending Western control of the Middle East and also setting the stage for one of the most tragic and intractable conflicts of modern times: the conflict over Palestine which has, since 1948, ignited four wars, sent masses of Palestinian Arabs into exile, contributed to the energy crisis of 1973, and, from 1975 on, fueled the civil war in Lebanon.

For several centuries following the initial Turkish conquest of in 1534, the Turkish rule had been exercised through local sovereigns, and many of the nomadic Arab tribes. In the latter part of the 19th century and became rivals in the commercial development of the Mesopotamian area. The British first became interested in as a direct overland route to , and in 1861 established a steamship company for the navigation of the to the port in the Persian Arabian Gulf.

Meanwhile, was planning the construction of a railroad in the Middle East-to run "from to Baghdâd"-and, overcoming British opposition, obtained a concession to build a railroad to the .

Despite this defeat, the British government managed to consolidate its position in the area by concluding treaties of protection with local Arab chieftains. British financiers were also successful in obtaining a concession in 1901 to exploit the oil fields of ; in 1909 the Anglo-Persian Oil Company (later the Anglo-Iranian Oil Company) was formed to develop this new industry.
After Turkey entered World War I in 1914 as an ally of the German Empire, British forces invaded southern Mesopotamia in November 1914 and gradually pushed northward against heavy Turkish opposition. Local resentment of the centralized authority of the empire began to develop, giving rise to a strong spirit of Arab nationalism.
Resistance to European penetration took several forms. The Arabs launched a daring guerrilla campaign against British forces. In March 1917 the British occupied . was fully under British military control by October 1918.

Early in the war, in order to ensure the interest of the Arabs in a military uprising against the Turks, the British government had promised a group of Arab leaders that their people would receive independence if a revolt proved successful. In June 1916 an uprising occurred in Al Hejaz, led by Faisal al-Husein, later Faisal I, first king of .

Under the leadership of British General Edmund Allenby and the tactical direction of British Colonel T. E. Lawrence, the Arab and British forces achieved dramatic successes against the Turkish army and succeeded in liberating the Arabian territory.

In 1918 an armistice was signed with , and the British and French governments issued a joint declaration stating their intention to assist in establishing independent Arab nations in the Arab areas formerly controlled by .

In July 1920, when the Mesopotamian Arabs learned of the decision of the Supreme Allied Council, they began an armed uprising against the British government, then still occupying . The British were forced to spend huge amounts of money to quell the revolt, and the government of concluded that it would be expedient to terminate its mandate in .

The British civil commissioner thereupon drew up a plan for a provisional government of the new state of : It was to be a kingdom, with a government directed by a council of Arab ministers under the supervision of a British high commissioner. Faisal was invited to become the ruler of the new nation. In August 1921 a plebiscite elected Faisal king of ; he won 96 percent of the votes cast in the election.

The integrity of the newly established state was menaced from without by Arabia to the south and to the north, and from within by various groups with separatist aspirations, such as the Shiites of the area and the Kurdish tribes of the north. These groups acted in conjunction with Turkish armed forces endeavoring to reclaim the lands in the area for .
The British were thus forced to maintain an army in , and agitation against the British mandate continued. King Faisal formally requested that the mandate under which was held be transformed into a treaty of alliance between the two nations. The British government concurred, and in June 1922, a 20-year treaty of alliance and protection between and was signed.

In 1927 King Faisal requested that the British support 's application for admission to the , but the British refused to take such action. However, in June 1930 a treaty between and included a recommendation by that be admitted to the as a free and independent state in 1932.

The recommendation was made that year and the British mandate was formally terminated. In October 1932 joined the as an independent sovereign state. King Faisal I died in 1933 and was succeeded by his son, King Ghazi I.

In 1936 , under King Ghazi, began to move toward a general alliance with the other nations of the Arab world in forming the so-called Pan-Arab movement. A treaty of nonaggression, reaffirming a fundamental Arab kinship, was signed with the king of in the same year. In April 1939 King Ghazi was killed in an automobile accident, leaving his three-year-old son the titular king, as Faisal II, under regency. King Faisal II formally assumed the throne on May 2, 1953, at his 18th birthday.