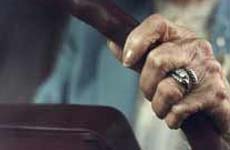 Senility is a mental disorder that disables the patient from performing a number of mental and rational functions properly, like thinking, learning and memorizing. It is a progressive condition in that it increases in time.

At first, it does not appear as seriously prohibitive of daily activities, but later it incapacitates the patient to the point that one becomes dependent upon another person for basic needs like a child.

While so far senility has been linked with old age, and considered inevitable with aging, some contemporary experts find that senility is not inevitable, but rather like any other illness that afflicts aged people and one that could be avoided.

The level of senility and intensity of its symptoms differs from person to person, but essentially it appears as dulling of mental functions like thinking, reasoning, understanding, memory and language. In later stages it compounds and appears as prohibitive disorder in behavior.

In fact, senility is not one disease but of several kinds and each one of them has its own causes. Alzheimer, for instance, is responsible for 50% of cases of senility, thus being the most common source of it. Alzheimer's disease is only one type of dementia, dementia being a general disorder that means a loss of mental functioning.

When German psychiatrist Alois Alzheimer first described the disorder involving progressive loss of memory and other mental capacities, there was little urgency to find a cure. The life expectancy at that time (1906) was 47 years, and few-people lived long enough to reach the peak period of risk. Today 10 percent of Americans over age 65 and about half of those over 85 have Alzheimer's disease (AD)-a total of roughly four million. With an aging population, experts say, that figure could reach six million by the end of this decade and 14 million by mid-century.

Alois Alzheimer had studied in 1906 a strange illness that one of his patients, Augustine, was suffering from. The illness caused her death after a short while. After performing autopsies of patients with dementia, Alois Alzheimer found that their brains contained abnormal deposits of protein clumped around nerve cells and tangles of protein inside the cells. Now known as beta-amyloid plaques and tau tangles, these are the unique features of AD, but no one knows for sure whether they are a cause, an effect or a co-existing condition.

For the present, unfortunately, those diagnosed with Alzheimer's have little to show from the explosion of knowledge. Doctors do not know how to prevent Alzheimer's disease or how to cure it. The drugs approved for treatment slow the progress or lessen the severity of symptoms, but only in some patients and only for two years at the most. The causes of the disease are unknown, and even diagnosis is difficult.

The brain arteries that provide nutrition to the brain may suffer from narrowing down or even blockage, affecting neurons by diminishing the oxygen supply and possibly causing the cells to die. Depending on the part of the brain that is affected, the patient may be paralyzed in different functions of the body, like speech or movement.

The malady of brain arteries appears all of a sudden and may either improve in time or stay the same. Senility that results from this malady is accompanied often by other disabilities like weak movements, paralysis of half of the body or difficulty in speech.

Parkinson's disease results from gradual atrophy of the nervous system. It may appear at any age, but it is uncommon in people younger than 30, and the risk of developing it increases with age. It occurs in all parts of the world, and men are affected slightly more often than women. To diagnose Parkinson disease, patients must have at least two of Parkinson's 4 main symptoms: resting tremor, slowness of movement, stiffness, and trouble walking.

Occasionally, the disease also causes depression, personality changes, dementia, sleep disturbances, speech impairments, or sexual difficulties. The severity of Parkinson's symptoms tends to worsen over time. Parkinson's disease was first formally described in "An Essay on the Shaking Palsy," published in 1817 by a London physician named James Parkinson, but it has probably existed for many thousands of years. Although there are many theories about the cause of Parkinson's disease, none has ever been proved. There is no cure for Parkinson's disease. Many patients are only mildly affected and need no treatment for several years after the initial diagnosis. When symptoms grow severe, doctors usually prescribe levodopa (L-dopa), which helps replace the brain's dopamine.

There are other disorders that may resemble senility but are not it. What distinguishes them is the fact that they are temporary and the patient may get better in time and return to his/ her normal life. These conditions may be caused by dehydration, dietary disorders or side effects of other medicines, etc.

Senility, like all other conditions and states of human beings, is a sign of Allah. Allah eloquently depicts the weaknesses that accompany increasing age in the Quran, and reminds us that we are born weak and dependent, then Allah gives us strength in youth, and then He takes it back and we return to the weakness and dependence of childhood. Old age, besides bringing wisdom and mitigating desires, is a reminder to us humans of the fact that we are mortals, weak and dependant, and just as we return to the weak state of life that we began with, we will eventually return to Allah, where we came from.

Allah says (what means): "And he whom we grant long age, we reverse in creation; so will they not understand?" [Quran, 36:68]