A dialogue with Satan 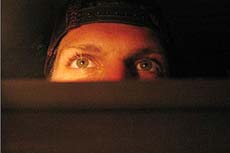 Deep at night, I had this dialogue with Satan. Shortly, I heard the Fajr (dawn) prayer call. I wanted to go to the mosque.

Then, I didn’t wake up until the sun had already risen.

As soon as I started mentioning Allah, he brought to my mind all kinds of thoughts.

I started to memorize Quran

A beautiful lady passed by, so I lowered my gaze.

I went to the Ka'bah (Sacred Mosque in Makkah). There he was with me on the way.

I went to give advice to people.

The moment I said so, he disappeared as though melting into the sand - and this is the liar’s end.