The danger of changing the meaning of Allah's Names and Attributes 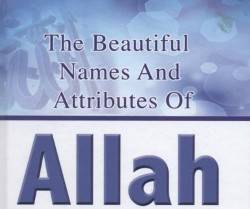 When dealing with the issue of belief in Allah's Names and Attributes, we have to bear in mind the following important points:

1) Placing Allah, The Most Exalted, above any likeness to human beings and beyond any imperfections.

2) Belief in the Names and Attributes established in the Quran and Sunnah (the sayings, actions and approvals of Prophet Muhammad

), without ignoring them, expanding upon them, changing or overriding them.

3) Abandoning any desire to discover the form of those attributes by realizing the following:

A: The attributes of Allah Almighty bear no resemblance whatsoever to any human attribute. Allah Says in the Quran (what means): “There is nothing like Him…” [Quran 42:11]

B: The only names and attributes to be ascribed to Allah Almighty are those mentioned in the Quran and Sunnah.

C: We are required to believe in these names and attributes without inquiring after their nature and manner or investigating their essence.

This is so because attributes vary according to the self they characterize; finding out how they manifest themselves depends upon knowing the self and how it acts.

If someone were to ask: “How does Allah Almighty descend to the lower heavens?” We would reply by asking: “What is His nature?” If the questioner says, “I do not know Allah’s nature", we say: “And we know not how He descends!"

Tawheed of Names and Attributes is violated by the following:

1. Ta’teel (Negation): This is done by negating Allah's Names or Attributes, and denying their existence in Allah. For instance, negating the perfection of Allah by denying His Names and Attributes, or negating the proper conduct towards Allah by abandoning worship, or barring the created from its Creator, such as those who deny the fact that Allah Almighty created the universe and claim that it developed and evolved by itself.

The deviant Islamic sect who adopted this crooked creed is called 'Al-Jahmiyyah', the followers of Jahm Ibn Safwaan. They deny the Attributes of Allah, the AlMighty and Exalted; in fact, their extremists deny the Names and say: "It is not permissible to affirm a Name or an Attribute of Allah; for if you were to affirm a Name for Him, you have likened Him with things with (similar) names, or an Attribute, then you have likened Him with things of (similar) attributes!! And whatever Allah assigns to Himself from the Names; then it is just in a metaphorical sense; and not the case of actually naming with these Names (literally)!!"

So these people claimed: "It is a must for you to affirm the Face of Allah, and this Face is like the Face of the most beautiful one from the children of Aadam." They also claimed:"Because Allah addressed us with what we understand and comprehend; (so Allah) said (what means): "...And remains the Face of your Lord full of Majesty and Honour." [Quran 55:27], so we do not understand or comprehend from the Face except what we witness, and the best of what we see is the human."

According to their claim - we seek refuge in Allah from such heresy - (the Face of Allah) is like the best one of the human youth!! And they claim that this is rationally logical!!

3. Tahreef (Distortion): This is done through false interpretation or change. For example, the change of the wordings of names and attributes, by adding to them, subtracting from them or changing the grammatical constructions, such as the verse (which means): “And Allah spoke directly to Moosa (Moses).” [Quran 4:163) where the word Allah they claimed to be in the objective case, thus indicating that it was Moosa may Allah exalt his mention who spoke to Allah and not vice versa. Thus, they denied Allah’s attribute of talking.

Al- Jahmiyyah also adopted this innovation through such claims as that the Istiwaa' (Allah's Ascending above the Throne) means 'conquering and having dominion over'; and like the saying of some of the innovators that  'Anger' when referring to Allah means 'intending to send blessings', all of which goes under Tahreef. The true saying, however is that Istiwaa' means ascending and being above- as is clear in the Arabic language. The Quran came to show that its meaning is ascending and being above the Throne in a manner which befits Allah's Majesty and Greatness.

4. Takyeef (to try to describe "how" an Attribute is, e.g., to say: How Allah's Hand is? It is like this and that, or: How His Descending is? It is like this and that): This is done by attempting to determine the manner in which Allah’s Attributes take form and also determining their essence. The method of taking Names and Attributes mentioned in the Quran and Sunnah at face value, without any comparison, change, negation, nor give the "how of" is the method of the Companions may Allah be pleased with them, their followers and those who followed their followers, may Allah have mercy them.

Takyeef differs from Tamtheel and Tashbeeh in two ways:

1- Takyeef is to Relate How Something is, with restriction or not by way of resembling. While Tamtheel and Tashbeeh indicate how something is, in a restricted sense, by way of a likeness or resemblance respectively. Takyeef is more general. All who do Tamtheel are doing Takyeef. But vice versa is NOT the case.

2- Takyeef is Particular to Allah's Attributes, while Tamtheel is concerned with His Decree, Description and Self.

Ahlus-Sunnah Wal-Jamaa'ah (the mainstream moderate Muslims) affirm for Allah -The Most Exalted -what He has affirmed for Himself in His Noble Book, or what has been affirmed for Him by His Messenger Muhammad

in the authentic Sunnah, without Tamtheel. They free Allah - the Most Exalted - from any resemblance to His creation, whilst also rejecting and being free from Ta'teel.