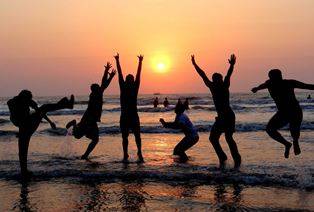 Keeping bonds of kinship is not as easy as it sounds. Families and friends give warmth and meaning to our lives, keep us strong and fulfilled, make us feel loved and wanted, help us grow, struggle and stay the course of an unpredictable and at times unkind life. In Islam, Allah requires us to revere the womb and the relation-ships that emanate from it.

Allah the Almighty imposes on us to save not only our-selves but our family from the Punishment—which means that a good family can help us evade the Fire of a miserable eternity, just as a bad one can lead us into it.

Allah Says (what means): “O you who believe! Save yourselves and your families from a Fire whose fuel is Men and Stones.” [Quran 66:6]

But intimacy, closeness, frequent interaction and mutual dependence that dose family and friends share can lead to the exact opposite of the beautiful things enumerated above. Warmth of love in a family can turn into a hell of envy, bonds of blood can become spilling of blood, search for fulfillment can become thirst for humiliating others, and support in tough times can turn into hatred and rivalry even in good times. It happens when the members of a family do not possess the right values and attitude. Satan, the worst enemy of mankind, loves none of his snares more than sowing hatred within believing families and friends. The excessive individualism of modern times as well as timeless ignorance and selfishness can replace the love of families and bonds of friendship with hatred and bad blood.

Unfortunately, today we find some people that quickly denounce and desert family members only because they forgot to invite them to the last get together. We can find family members who actually live door-to-door and refuse to even share the greeting amongst them when they met face to face. The reason? Each one claims that the other should initiate the first visit and "why should I be the one to go knock on their door? Plus, I got ill the other day and they did not even bother to stop by and see how I was doing!" Oh, does it hurt to hear these `arguments.' It makes us understand the words of the Messenger of Allah

that Satan runs through the blood stream of the son of Adam. The saddest thing is that their children were told to never speak to their relatives or even approach their door. It rips hearts inside out to even think about it.

Severing relation has become a threatening epidemic that has found its way into many Muslim families. Have we forgotten the tremendous value of Ar-Raheem? Have we become completely unmindful and oblivious of its significance? Or is it that our selfishness and self-centeredness has gotten the best of us?

But, before we go further, let us define the word raheem.

The word in Arabic is extracted from rahem which literally refers to the womb; the latter has been the abode of every human being before they came out to this world except for Adam

said, "Ar-Rahem is the womb of the mother, and it stands for family ties knowing that it was the first source from which they were produced" In Islamic terminology, Ar-Rahem means family bonds and relations, something we refer to in English as kinship relationships.

: “Allah created all the creation, and when He finished, ar-rahem (the womb) got up and pleaded to Allah, where-upon Allah said to it, "What is the matter?" It said: "At this place, I seek your refuge from those who sever me (cut off ties of kinship)."  Allah said, "Yes, will you not be satisfied if I bestow My favors on him who keeps your ties, and withhold My favors from him who severs your ties;" Upon this, it said, "Yes, O my Lord!" Allah said, "Then that is for you". (Al-Bukhari)

This hadeeth lays out the very foundation of kin-ship, emphasizing its importance as well as the ramifications of' severing kinship ties.

Ar-Rahem is a noun that encompasses all the relatives from the father's and the mother's sides. Islamic scholar Al-Qurtubi

said, "Generally speaking, ar-rahem has a broad and a particular meaning. The broad one includes all the believers and that is ar-rahem of religion, then there is the one pertaining to all relatives of any person from the father's and the mother's sides which is the one concerning us in this issue. Know that each one of them has a number of due rights over you. Allah revealed this verse regarding ar-rahem, which many Muslims throughout the world recognize, since they hear it every Friday from their Imams as part of the introduction of the khutbah (which means): "And fear Allah through Whom you ask one another; and the wombs." [Quran 4: l]

Silah, which literally means connecting, is used often in conjunction with rahem, and so silat ar-rahem means to join the ties of kinship by treating one's relatives fairly and compassionately.

On top of the list of these relations come our parents, who have sacrificed much of their lives to make us strong and worthy human beings. Then come our brothers and sisters with whom we shared the same womb, and then our grand parents along with all the other family members including our uncles, aunts and cousins from both the paternal and maternal sides.

Our kin's rights over us

Every member of our family has rights over us. These rights differ from one person to another. For instance, the mother stands higher than the aunt and the grandfather is most definitely above the brother in law.

Some of the rights our next of kin has on us are: To maintain a good relationship with them by showing respect, love and sympathy. Be there for them when they need you. Go visit them at times of sickness and be a good support at times of tribulations. Share with them glorious moments. Let them in on all your good news. Buy them gifts and congratulate them on ‘Eed days. Help them financially during harsh times. When Allah revealed the verse (which means): "You will not attain piety until you spend from that which is beloved to you". [Quran 3: 93] Abu Talhah

said, "The most beloved to me of my wealth is Bayrahaa’ (a garden), and I am giving it as a charity for Allah, I yearn for its reward from Allah. O Messenger of Allah, spend it as you see fit according to what Allah has shown you." The Messenger

said, "Bakhin! (an expression of amazement) That indeed is a profitable trade. I have heard what you said, and I recommend that you spend it on your kin." Abu Talhah responded, "O Messenger of Allah, I will do so." And Abu Talhah

indeed gave it away to his relatives.

Spending on kinship has become a neglected responsibility, to the point that you can easily find people who will invite a friend to a classy restaurant and never spend a dime on their cousin. They offer valuable gifts and even money to their peers and co-workers while their parents are in dire situations. This brings to mind the event of Musteh who was Abu Bakr's cousin and also among those who fell into the error of slandering his (Abu Bakr’s) daughter, the mother of the believers, 'Aaishah

in the famous incident of ‘ifk (lie). This made Abu Bakr, may Allah be pleased with him, so furious that he took an oath he would never again give charity to Musteh. Following this incident Allah the Almighty sent down a number of verses attesting to the innocence of the mother of the believers, but among them was also this magnificent verse (which means): "And let not those among you who are blessed with graces and wealth swear not to give (any sort of help) to their kinsmen, and the poor, and those who left their homes for Allah's cause. Let them pardon and forgive. Do you not love that Allah should forgive you? And Allah is Oft-forgiving, Most Merciful." [Quran 24:22]

Upon hearing this beautiful verse, the noble companion Abu Bakr

said, "Yes we love!"(meaning yes O Allah, we love that you forgive us) Then he resumed his spending on Musteh. Let us all pause and look deep into this verse and reflect upon its limitless wisdom, and see how Allah the Lord of the worlds guided to Abu Bakr

charity to his kin, even when this person had falsely slandered his daughter!