Scenes from the Hereafter 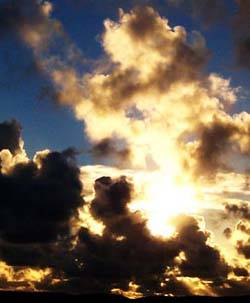 said, “Mankind will be exposed three exposures on the Day of Resurrection. The [first] two exposures shall be disputation and excuses, but at the third [exposure], the scrolls [of deeds] will be distributed, and then some will take them in their right hands, others in their left.” [At-Tirmithi]

So, the first time, people will dispute with one another: the weak with the tyrants who hindered them from faith, the tyrants responding that they are, in the final analysis, not to blame, for each individual believes or disbelieves by his/her own conscious decision. The disbelievers will deny that prophets came to them.

At the second exposure, people will acknowledge their wrongs, and will seek excuses. With the third exposure, the books of deeds will be distributed amongst them. Receiving the book in the right hand signifies success, while receiving it in the left hand or behind one’s back signifies failure.

Allah, the Most Exalted, Says (what means):

Belief in the questioning and reckoning of the Hereafter instills a sense of responsibility and accountability in the Muslim. He must be constantly watching over his heart and his deeds, and must be prepared to forego those fleeting, ephemeral pleasures of this world which are available to him on the path of sin. He must be prepared to undergo some suffering and hardship in the temporary abode (worldly life), in order to avoid the inescapable consequences of evil in the Hereafter. He must fear standing before his Lord if he desires safety on that ghastly day. Allah, the Almighty and Majestic, Says in a Hadeeth Qudsi (narration in which the meaning is from Allah and the wording is from Prophet Muhammad

People will be questioned, on the Day of Judgment:

1. About faith, as the Prophet

said: “You will be asked about (the testimony of faith): ‘Laa ilaaha illallaah (none is worthy of worship but Allah)’” [At-Tirmithi]

2. About the five-daily prayers: The Prophet

said “The first thing which the slave will be questioned about on the Day of Resurrection will be his prayer. If it is in order, then he shall have prospered and succeeded, while if it is impaired, then he shall have failed and be ruined.” [At-Tirmithi]

3. About those under one's care: Allah Almighty Says (what means):

“O you who have believed! Protect yourselves and your families from a Fire whose fuel is people and stones...” [Quran 66: 6]

4. About the bodily organs: Allah Almighty Says (what means):

“And do not pursue that of which you have no knowledge. Indeed, the hearing, the sight and the heart- about all those [one] will be questioned (by Allah)...” [Quran 17: 36]

5. About delights: Allah Almighty Says (what means): “Then on that Day you shall be asked about pleasure (you indulged in, in this world)!” [Quran 102:8]

6. About intentions: Allah Almighty Says (what means): “Whoever desires the life of this world and its adornments — We fully repay them for their deeds therein, and they therein will not be deprived.” [Quran 11:15-16]

In a long narration reported by Muslim

we are told that the men whose cases shall be judged first on the Day of Resurrection shall be a man who was martyred, a man who acquired knowledge and taught it and who recited the Quran, and a man to whom Allah had been generous and given many varieties of wealth. These men will acknowledge Allah’s favors upon them, and will claim that they did these deeds for His sake. They will be exposed as liars, for they did not do these deeds for the sake of Allah. The man who was martyred had been fighting in order to be called brave, the scholar or reciter of the Quran had acted thus in order to gain a reputation as such, and the benefactor had sought recognition as a generous person. Since deeds are judged according to their intentions, these people received what they had sought through these deeds, and so they will not receive reward for them on the Day of Judgment. Hence, they will be dragged into Hell on their faces.

Additionally, there are four questions which everyone must face on the Day of Judgement. The Prophet

said: “The feet of a slave will not move on the Day of Judgement until he has been questioned about [four things:] his life – how he spent it, his knowledge – how he acted upon it, his wealth – where he earned it and how he spent it, and his body – how he used it.” [At-Tirmithi]

Allah Almighty Says (what means): “Indeed, to Us is their return. Then indeed, upon Us is their account." [Quran 88: 25-26] People will be brought to account for their deeds, as well as for their resolved intentions. The Prophet, sallallaahu alayhi wa sallm, said: “When two Muslims encounter one another with their swords, the murderer and the murdered shall be in the Fire.” [Al-Bukhari and Muslim]

The murdered individual will also enter the Fire because he was intent on killing his brother. However, out of the Grace of Allah, we are excused for fleeting thoughts which we do not consciously entertain or sustain, nor verbalize. Allah Says (what means):  “Allah does not charge a soul except [with that within] its capacity” [Quran 2: 286]

has said: “Allah has forgiven my Nation for those things which their hearts whisper to them.” [Al-Bukhari and Muslim]

There will be some who will enter without reckoning. In the Hadeeth narrated by Muslim

said that the nations of all the prophets, may Allah exalt their mention, were exposed to him. He

saw some prophets with only one or two people, or their family members with them (i.e. no-one else had believed in them). Then, he

saw a huge crowd, and thought that was his Nation. Jibreel

(Moses) but he indicated to him a larger crowd which stretched across the horizon, and told him that this was his Nation. He

said, “…and with them are 70,000 who shall enter without reckoning or punishment. They are those who do not seek Ruqyah from others (words from the Quran or Sunnah said for the express purpose of protection or cure), nor draw omens, but rely upon their Lord.” [Muslim]

Martyrs of the battlefield who died in the cause of Allah will also be exempted from the reckoning. The Prophet

has said: “While the slaves (people) are standing at the place of reckoning, a [group of] people will come with their swords (hanging) on their backs dripping blood, and they will assemble at the gate of . It will be asked: ‘Who are these?’ whereupon it will be said: ‘They are the martyrs; they were alive, receiving sustenance.’” [At-Tabarani]