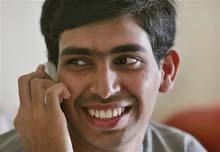 An Indian doctor has left Australia after charges linked to failed bomb attacks in the UK were dropped.

Dr Mohamed Haneef is flying to India to be with his wife and child after nearly four weeks in custody.

He was freed from prison on Friday and his passport was later returned to him, but his work visa was not restored.

The charges against Dr Haneef were dropped after Australia's chief prosecutor said there had been mistakes made in the investigation.

Lawyers for Dr Haneef said they wanted his name cleared completely, and demanded the restoration of his work visa.

This was withdrawn on the grounds that Dr Haneef was said to be of unsuitable character.

Dr Haneef's lawyer said that his client had left Australia voluntarily and was not deported.

"He had a choice of either staying until the hearing was concluded or going back to be with his wife and child on a voluntary basis and he chose to go back voluntarily," Peter Russo was quoted by Australia's ABC News as saying.

Dr Haneef told reporters he was "fine, thank you", during a stopover at Bangkok.

He did not leave the airport, but waited in a transit area for an onward flight to India.

Mr Russo said his client would continue with a court appeal in August to have his work visa restored.

The case threw new anti-terror laws under the spotlight and triggered concern from both legal and civil rights groups.

The case was withdrawn during a hearing at Brisbane court on Friday at the request of Director of Public Prosecutions Damian Bugg.

He later told a news conference that a review of the case found that there was no reasonable prospect of convicting Dr Haneef on the evidence available.

Prosecutors had claimed that the doctor's mobile phone SIM card had been found in the burning car that crashed into Glasgow international airport on 30 June.

But it later emerged the card had actually been found in a flat in Liverpool, some 300km (185 miles) from Glasgow, where his cousin lived.

Dr Haneef had been working at the Gold Coast Hospital in Queensland when he was detained trying to board a flight to India on 2 July.

It came days after two cars containing petrol, gas cylinders and nails were discovered in London, and a burning car was driven into Glasgow airport.

Three people have been charged over the failed bombings in the UK, including Dr Haneef's second cousin Sabeel Ahmed.

Mohammad Shuaib, brother of Indian doctor Mohamed Haneef, smiles as he speaks on the mobile phone at his home in Bangalore, India, Friday, July 27, 2007. (AP)