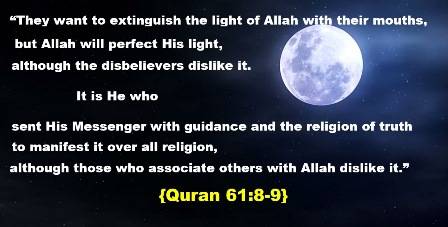 The concept that the future belongs to the Muslims: Allah will certainly make this religion prevail and grant the Muslims victory over the disbelievers, even if after a while. Allah Says (which means): “They want to extinguish the light of Allah with their mouths, but Allah will perfect his light, although the disbelievers dislike it. It is He who sent His Messenger with guidance and the religion of truth to manifest it over all religion, although those who associate others with Allah dislike it.” [Quran 61: 8-9]

Muslims nowadays are in dire need of understanding this concept. We must firmly believe that despite our current weakness, Islam will prevail and be victorious. This concept gives hope to the hearts of the believers, especially when one reads the saying of the Prophet

The concept of Unity: This is a concept that The Quran emphasises upon; it commands the Muslims not to disunite and become scattered groups; Allah Says (what means): “And hold firmly to the rope of Allah all together and do not become divided…” [Quran 3: 103]

Where do the Muslims of our era stand in terms of this divine command? They have disunited and become scattered groups, to the point that the common Muslims cannot recognise where the truth is anymore. How can the Muslims unite? What will unite them? The only thing that will unite them is their collectively holding on to the Bond of Allah, His Book (i.e. the Quran), His commands, and His religion. Any attempt to unite on any basis other than the religion of Allah will be fruitless and people will not attain the sought victory, because Allah only aids those who unite on the basis of His religion.

The concept of superiority: Allah Says (which means): “You are the best nation produced [as an example] for mankind. You enjoin what is right and forbid what is wrong and believe in Allah…” [Quran 3: 110] How did our nation become the finest and most superior? It was through it enjoining good and forbidding evil. If we fail to do this then we can no longer count ourselves as a part of this superior nation as this superiority is not granted simply for being a member of this nation. Rather, we must fulfil the conditions of being superior.

This superiority is mentioned in different verses to reflect another concept; Allah Says (what means): “So do not weaken and do not grieve, and you will be superior if you are [true] believers.” [Quran 3: 139] Meaning that we are superior when we adhere to our religion and its teachings; we are superior with the faith that Allah blessed us with; we are superior due to our adhering to the Sunnah of our Prophet

; we are superior by persevering in our adherence to the Quran and the Sunnah.

then it is certainly more applicable with respect to anyone else.

The concept of having to face harm from the disbelievers: We must realise that the disbelievers will afflict us with numerous and varied types of harm; Allah Says (what means): “You will certainly be tested in your possessions and in yourselves. And you will surely hear from those who were given the Scripture before you and from those who associate others with Allah much abuse. But if you are patient and fear Allah – indeed, that is of the matters [worthy] of determination.” [Quran 3: 186] Therefore, the harm that they afflict us with is physical, financial and psychological, but what is the cure and way out? Allah gives us the cure at the conclusion of the verse, namely, perseverance and piety. If we do not have these then we will not be able to stand their afflictions, nor will we be able to confront them.

The concept of referring to the Quran and the Sunnah for judgement: This must be applied to all our affairs and disputes; Allah Says ( what means): “But no, by your Lord, they will not [truly] believe until they make you, [O Muhammad], judge concerning that over which they dispute among themselves and then find within themselves no discomfort from what you have judged and submit in [full, willing] submission.” [Quran 4: 65]

Disputes and disagreements amongst the Muslims have increased, and thus the need for applying this concept is needed more than ever. Even in matters of jurisprudence, the common people have become very confused due to hearing different opinions regarding the same issue.

What is the solution to this confusion and disputation? It is in the saying of Allah (which means): “…And if you disagree over anything, refer it to Allah and the Messenger, if you should believe in Allah and the Last Day…” [Quran 4: 59]

Finally, the solution for all our problems is found in the Quran and all we need to do is to adhere to it, correctly understand the concepts in it, and apply them and inculcate them in practical life.