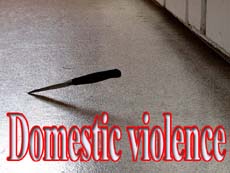 ·         Severe, repeated and systematic violence occurs in at least 5 of every hundred marriages in Britain;
Between 40 and 45% of murdered women are killed by their male partners;
Between 1 of  every 2 women are murdered by their male partners every week;
more than 25% of all violent crime reported to the police is domestic violence of men against women, making it the second most common violent crime; (Domestic Violence - Action for Change, G. Hague & E. Malos, 1993)

·         30,000 women and children stay in refuges in the UK every year;
One quarter of all assaults are in domestic circumstances (Domestic Violence - Report of an Inter-Agency Working Party, 1992)

·         Jean Louis stated that between one third to two thirds of divorce cases are due to violence at homes, consuming intoxicants and the low moral standards of men.

·         In another report, 77% of husbands who beat their wives do it for no reason. Additionally, the report quoted a woman, whose husband has been beating her for three and a half years since they got married, she said: “If I tell him complain about anything after he beats me, he would resume hitting me, and thus I choose to remain silent. He does not beat using one method, but rather uses many different means of beating, like punching, kicking and hitting my head against the wall; and he would not care if his kicks or munches fall on sensitive areas of my body.”

·         Women organizations try to provide shelters, financial assistance and psychological care for the victims. Joan Jangler is one such example for women who lead this type of campaign, and through the past twelve years she helped thousands of people who were abused at their homes. She collected seventy thousand Pounds to run this project and established the first center in Manchester in 1971, and then her centers spread throughout England and reached one hundred and fifty centers in total.

·         In France, almost two million women are subject to physical abuse. The officials from the French police stated that this phenomenon covers around 10% of the French families. The government announced that they will run a campaign to educate people most of whom consider this phenomenon a normal thing.

·         Michele André, who is the secretariat for women’s rights in France: “Even animals are treated better than women sometimes. If a man hits a dog in the street then at one person would complain to an animal right’s organization, but when a man hits his wife in the street, no one moves”. She added in a press conference to French press: “People must be made to understand that hitting is an act that just will hold them accountable for. I would like for people to stop thinking of this as a normal matter … the world admits of the existence of the concept of a controller and a controlled, and approves of it …this is a logic that must be stopped”.

·          “France Swar” newspaper quoted officials in the police forces regarding such who said: “92.7% of beating cases amongst spouses happen in cities while 60% of the calls appealing for help in Paris were women whose husbands were abusing them”

·         The secretariat for women’s rights in France that there different types of abuse practiced against women, some are psychological, like threats and humiliation, and others are physical, like hitting.

·         An organization named “Rescue of women who are beaten” noticed that the women who are received in their organization range between 25 and 35 years of age, and the average they were mothers of two children whose education level was law. In most case such ladies were isolated from their families and neighbors. More than often, matters like illness, addiction to intoxicants or unemployment made the abuse practiced against them increase even more, but few dared to expose their situation due to them fearing their husbands’ revenge, or due to the lack of courage.

·         A twenty five year old lady, who tolerated two years of her husband’s beating, said when she was told to leave her house: “In France we do not talk about our married lives, because we do not trust his friends or anyone else to the point that we disclose our personal secrets to them”

·         Alixder Douma, one of the French writers resembled women to meat slices saying: “The more you beat them the thicker they get”

·         In a major survey done of over 12,000 Canadian women in 1993, findings showed that one in four women reported experiencing violence from a partner or ex-partner. The Violence Against Women Survey. Ottawa: Ministry of Supply & Services, 1993.

·         According to an official survey to record the cases of domestic violence which was conduct by the Suzan Snaifli and her team reflected that almost three hundred thousand woman and children were victims and domestic violence cases.

·         Moreover, according to another survey done by social services in New Zealand, it was agreed that the ratio of domestic violence reach a rough percentage of 14%. According to other similar studies and surveys in 1994, the ratio was 1 out of 10 or 1 to 4 based the population. This means that the number of abused children were 129556 and the number of abused women were 172125, giving a total of 301681 abuse cases all together.

·         In the year 1985 domestic violence was one of the factors that contributed to the increase of divorce cases to reach 59% from 1500 divorce cases. 38% of these cases were working class women who were forced to call in the police for severe cases of beating, while 13% of the middle class wives refrained from calling the police, in addition to 4% of the wives from the upper class.

·         According to one of the surveys in Germany, not less than one hundred thousand women are being attacked and abused by their husbands or boyfriends yearly, both physically and psychologically, with the possibility that the actual figure jumps the six digit number.

·         One of the surveys conduct attributed the high number of abuse cases to long-term unemployment, debts, being an alcoholic and extreme jealousy. One of the governmental institutes in Germany set a program to offer aid through a charitable organization over a period of two years as a solution to this phenomenon.

These were some surveys and numbers reflecting the reality of the situation of the western woman in the United States and Europe. These countries are claiming to want to reform men by amending laws and legislations worldwide.

The American and European man who commits such a huge number of abuse cases against women, whether a wife, a daughter or a girlfriend, he does so because the method of upbringing in their countries are corrupt and astray and need major practical reformation.

Women in the Arabic and Muslim countries do not face even one tenth of such humility, because men get their guidance from their religion before the law, men are (in most cases) ashamed of committing such crimes that these surveys address.

We are not claiming that our communities are free from any abnormal cases, but such crimes remain within limited numbers that co not exceed by any case 5%.

The so called “Women freedom” program that is trying to enforce the western values and criterions on the entire glob, is doing nothing but attempting to place Muslim women in a low rank and make her a cheep commodity for men to enjoy, use and abuse her by working during day time, then physical abuse on her and her children at night.

We wish that true and authentic surveys could be conducted in our Islamic countries to prove to the world that the Muslim woman who wears a head veil and a face cover, as in some of our conservative communities, gets honored and enjoys the care which the American and western woman never dreams to get.

Note: Most of the statistical data collected are about Western societies and that are due to the availability of documentation on the matter. We realize that domestic violence is prevalent in all societies -- Eastern and Western alike. The main thrust of our topic is that adopting the Islamic solution is more fruitful than man-made solutions.