How to teach our kids Tawheed 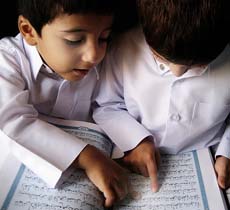 When we want to teach our kids Tawheed (i.e. Islamic monotheism) should we have to read classical texts and books in this regard?

No, this is not needed in the early stages of their lives because this requires long hours of attentiveness and hard work, which is difficult for children.

Later in life, one can do so when their level of comprehension allows them to grasp what is being read and said to them. Initially, one can convey what he wants in the form of relating stories of the companions of the Prophet

who gave precedence to their faith and to worshipping Allah over living in their homelands and amongst their families and tribes, and highlight that this was because the companions, may Allah be pleased with them, realized that the reason why Allah created us was for the sole purpose of worshipping Him.

One may resort to other means of teaching them, such as:

In such a case the parent may stop at certain verses which address a specific aspect of Tawheed and explain it. An example for this is the verses addressing the story of Prophet ‘Eesaa, may Allah exalt his mention, and that he was not crucified as the Christians claim, but the parent must choose simple phrases that are within the level of the child’s understanding and comprehension.

Relating stories of the Prophet

and his companions, may Allah be pleased with them, and other heroes in Islam:

Children like hearing stories, and thus the parents should take advantage of this interest in them. One should not simply relate the story without highlighting certain matters and emphasizing on the lessons one can extract from these stories.

Commenting on some events:

One can remind the children with the massacre that took place to the Muslims in Bosnia and the atrocities that are currently taking place to the Muslims in Palestine, Iraq and other places and make it clear for them that their suffering is because of their faith and because they are Muslims. This will make the child sympathize with his fellow Muslims.

When the child is ill, the parent can instill in him the principle that Allah Alone is the One Who can cure and that medicine is but a means and that it is Allah Who made it a cause to cure. Clarify that Allah is The Only One who can benefit or cause harm, and He is the only One to seek refuge in to lift any harm. Parents should exploit all other situations to instill different principles of Tawheed.

A parent could be a means to instill certain values and basics of Tawheed through his or her conduct and actions. For example, a parent may praise a person in front of his children only because he is a righteous one or a one who fights Jihaad. Likewise, a parent may dispraise another person because he is a disbeliever.

This clarifies to the children one of the principles of faith, and that is love and hatred are both done for the sake of Allah and not because so and so person deprived us form a job or money that we wanted. Parents should be careful in front of their children lest the children adopt a bad habit, because it is the parents who have the most effective influence on the children.

During the child’s daily activities, they may utter or do something Islamically wrong or contradicting to Tawheed and it is the role of the parents to correct them. The child may swear by other than Allah, and it becomes mandatory upon the parents to clarify that this is a form of disbelief and associating with Allah, and so forth.

A child may hear at school that Santa is a nice man who brings gifts and nice things, then the parents must explain that this Santa is a symbol for non-Muslims (namely the Christians) and that he is nothing but a myth made up by them, and that the only One Who Has the power to benefit or cause harm is Allah Alone.

Likewise, if the child sees on TV that a certain character controls the wind or the rain, the parents must make it clear that this is association with Allah and that these are qualities that are exclusive to Allah.

These were some suggestions of simple and important means and methods through which parents can clarify aspects and principles of Tawheed to their children.